That may seem a strange sentiment coming from a man who led a Fortune 200 company owning more than a dozen coal-fired power plants. But then again, Crane is far from your typical energy exec.

During Crane’s 12-year run as CEO, he tried to transform NRG—then America’s fourth-largest carbon emitter—into a firm focused on wind, solar and nuclear power. The company made strides in that direction, but Crane was ultimately let go earlier this year.

“I was trying to turn a company from brown to green, from centralized to distributed, and wholesale to retail,” he told corporate leaders on May 24. “I was trying to do three transformations at the same time. That was probably a couple of bridges too far.”

Yet even after that setback, Crane remains dedicated to reforming the U.S. power sector.

Crane shared his views at WRI’s MindShare event, a two-day conference that brought together sustainability directors and other business leaders from our Corporate Consultative Group. During a dinner conversation with WRI President and CEO Andrew Steer, Crane offered a blunt take on how corporations can help put the United States on a sustainable energy path. 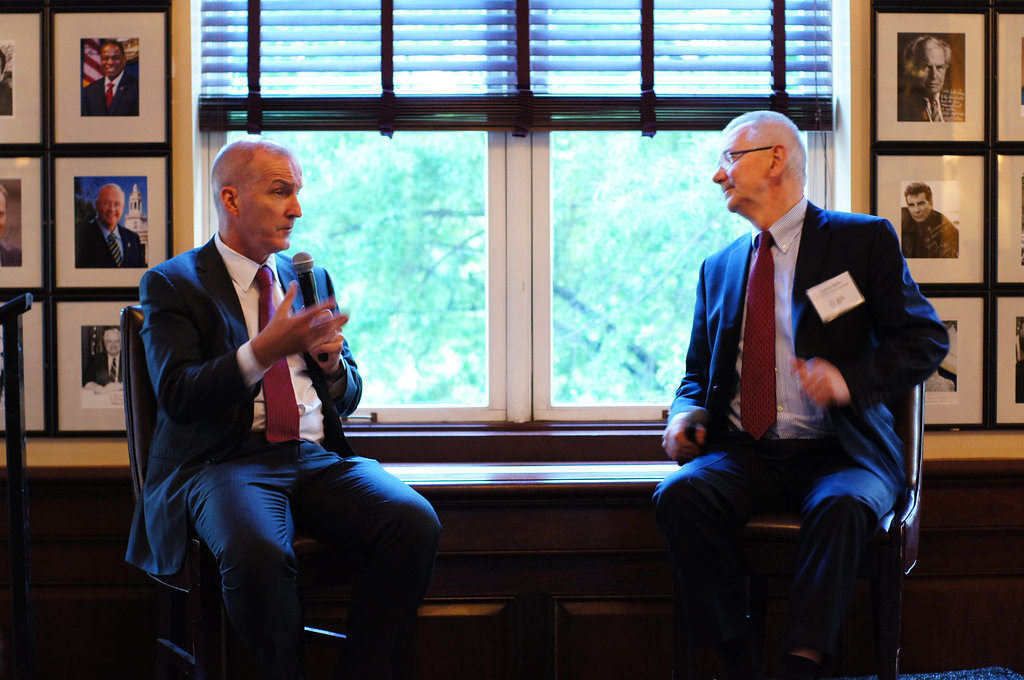 According to Crane, one of the biggest hurdles to scaling up solar and other renewables is utilities’ reluctance. They’ve built their business models on fossil fuels, and because of current grid design, consumers can’t go elsewhere. In short, the principles of the free market don’t apply to utilities.

“There’s no possible way that a company that doesn’t have to compete for customers has the same customer service mentality as one who does,” Crane said. “The problem with reforming utilities is there’s nothing you have to offer them that is better than what they have now.”

While Crane pointed to energy models such as distributed solar as the next generation in the power business, other experts in the room saw a role for corporate leadership in working with utilities to expand the share of renewable power. The new Renewable Energy Buyers Alliance (REBA), for example, is a coalition of more than 60 major companies looking to buy large amounts of affordable, renewable power from local grids. “REBA really makes the demand for renewable energy from fast-growing sectors visible and brings it to utilities that are willing to have a conversation about how their business model needs to change to respond to this demand,” said WRI Energy Director Alex Perera. “This is a very powerful forcing mechanism for utilities.”

“I think of us as a significant energy consumer,” said Bill Weihl, sustainability director at Facebook, one of REBA’s members. “We want to move a lot faster than the reform process can, and I think some of that involves working with utilities.”

There’s also a role for stoking competition within industries. Crane recalled when the Philadelphia Eagles committed to install solar panels on their football stadium. Not two months later, the owner of the New York Giants approached Crane, who was still with NRG. “He said, ‘David, I’ve spent my whole life in football, and all I know is I want to beat the Philadelphia Eagles,’” Crane said. “’I want to beat them on the field and I want to beat them off the field. Can you get solar panels on our field before them?’”

Crane envisions similar competition in other industries, such as fast food.

Crane was ultimately hopeful that we’re moving toward a cleaner energy future—as evidenced by the growth of solar and electric transport—but said we need to pick up the pace. Corporations have the power to be responsive and affect change—even more quickly and efficiently than governments. That’s why Crane thinks corporate sustainability officers have the most important and exciting jobs now.

“If you can find one champion [in your company], if you can get one of those people on your side, that’s good,” Crane said to the room full of sustainability officers. “There’s a huge opportunity to say within your company, ‘We have a chance to lead on this!’ As sustainability officers, we can really make an impact, so when it’s all done you can look your kids in the face and say ‘I did everything I could and we were successful."

6 Environment and Development Stories to Watch in 2017