This is the first installment of a two-post series on uncertainty and climate change. Read the second part here.

People are naturally flummoxed by uncertainty. When faced with tough decisions, some people tightly latch on to facts and evidence, numbers and graphs, probabilities and data. Others turn to spiritual beliefs. When those don't exist, or include too many unknowns, it can lead to indecision.

Yet uncertainty is all around us. Tsunamis, a global economic crash caused by a financial bubble, ecosystem collapse following loss of a keystone species, the surprise win of a presidential candidate — the unexpected is present everywhere, and we are usually poorly prepared for how surprising events will ripple throughout society, the environment, the economy, and our everyday lives.

This is also true for climate change. It is certain that climate change is happening and driven by human factors. But its inherently complex nature makes it less clear what the impacts will be—including when and where they'll happen, or to what degree. The uncertainty of future climate policies, greenhouse gas emissions, complex climate and socioeconomic feedback loops, and unknown tipping points all further complicate our projections.

But this doesn't mean we can't or shouldn't act to try to reduce risk. Indeed, it would be disastrous not to. Scientific uncertainty will always exist to some extent about any complex problem, climate change included. Rather than wringing our hands in indecision, it's important to understand this uncertainty, embrace it as a given, and move forward with ambitious action.

Stated simply, scientific uncertainty is the lack of exact knowledge, regardless of why this knowledge deficiency exists.

Our understanding of intricate natural phenomena and the consequences of our actions on the environment is still very much a work in progress. This past year, Arctic sea ice retreated well beyond even what models had predicted, setting new record lows, and shows no sign of returning to normal — an event that had a less than 4.4 percent probability of happening.

This loss of sea ice presents a clear example of what's known as complexity uncertainty, given the interdependent effects of wind patterns, warmer air and surface temperatures, and the effect of rising and warming seas that, in some way or another, all contributed to melting sea ice. This type of uncertainty is inherent to complicated and dynamic phenomena that interact with multiple systems and interdependent factors, known and unknown. The stock market is another example. Gaps will always remain when trying to analyze such layered interactions at work, and the threat of surpassing thresholds and tipping points, without knowing when they will happen or what they entail, exacerbates the problem.

In March 2011, Japan felt the earth heave and shake stronger than ever before — and not where geologists had forecasted. Within minutes, a tremendous wave leapt over what everyone believed were insurmountable sea walls. The tsunami overwhelmed the emergency cooling generators of a nearby nuclear plant, causing explosions and a radioactive meltdown the likes of which the world had not seen since Chernobyl.

The Fukushima nuclear disaster was labelled a "black swan," a difficult-to-predict occurrence resulting from a series of events all believed to have been impossible. Fukushima's sophisticated emergency designs had been tested rigorously against earthquakes rating a 7.9 on the Richter scale, since any earthquake above that intensity was thought to be impossible in this area. However, the earthquake on the day of the disaster rated a 9. Similarly, decades earlier the sea walls had been considered sufficient protection. Here, deficit uncertainty — uncertainty arising from a lack of accurate models, ignorance, biases and measurement errors— played a major role. 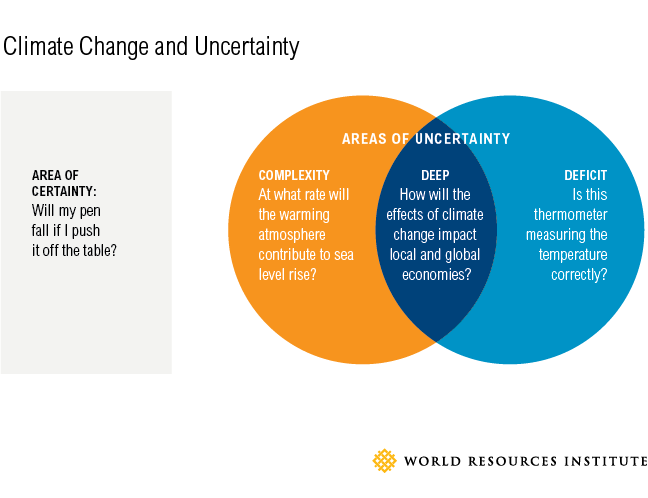 When these two kinds of uncertainty, deficit and complexity, come together they create what is called deep or cascading uncertainty, doubly dangerous and difficult to predict. In the climate change field, with its countless socioecological factors and interdependent systems, its known unknowns and unknown unknowns, deep uncertainty abounds. The attempt to limit carbon to 400 parts per million (ppm) is one such example, because the tipping point towards irreversible consequences might come long before this human-set threshold (which, by the way, we permanently surpassed in September 2016).

Even with the best science and information, the future — especially when it comes to climate change and its threat-multiplying effects — often remains highly uncertain, and therefore highly unpredictable.

However, that doesn't mean we can't have the best possible preparation in place. The first step is to realize the uncertainty that is all around, and, instead of shying away from it, embrace it and tackle it head on.

Tune in tomorrow for the second part of this blog post, which illuminates how researchers and policymakers can best move forward in the face of uncertainty.

How Do We Tackle Climate Change Uncertainty?

Why Positive Climate Feedbacks Are So Bad