In 2009, the first unit of a hydro-powered mini-grid was installed in the Ludewa District of Tanzania. Today, this community-owned and
-managed system serves over 1,600 customers in 10 villages, and the electricity it supplies has brought welcome benefits to citizens. In Mawengi, barbers, butchers and restaurant operators with electric lighting can extend business hours. New enterprises have sprung up; villagers who exported sunflower seeds and imported sunflower oil in the past now press sunflower seeds into sunflower oil locally. Retention rates of medical staff have improved, and village health centers can now use refrigerators to store medical supplies.

Off-grid electrification will be critical to reach Sustainable Development Goal 7, modern energy for all, by 2030. Energy leaders across the region can look to the experience of Tanzania, which has doubled the number and capacity of its mini-grids since 2008, for important lessons.

Mini-grids—electrical generation systems of less than 10MW that serve customers through local distribution networks—are emerging as promising complements to the traditional central grid. They can help countries meet electricity access targets faster and, in some cases, more cost-effectively. By generating electricity close to where it’s needed, and with the advantage of flexibility and scale, mini-grids can become the standard choice for the millions of rural Africans who live far from the central grid and who would otherwise have to wait several years, or even decades, for an electric connection. By 2040, an estimated 140 million rural Africans could get electricity from mini-grids, requiring more than 100,000 additional units to be built. 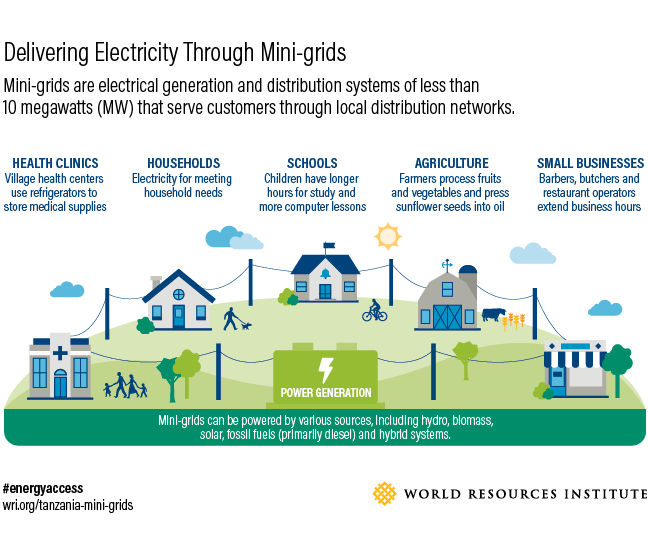 Rural electrification is a key component of the government’s plan to make Tanzania a middle-income country by 2025. Tanzania estimates that about half its rural population may be served more cost-effectively by decentralized options than by centralized grid expansion.

In 2008, Tanzania adopted a groundbreaking Small Power Producer framework to encourage investment in the sector. Since then, the number of mini-grids in the country has doubled. Today, the national utility (TANESCO), private businesses, faith-based organizations and local communities own and operate over 100 mini-grid systems with a total installed capacity of 157.7MW, serving over 180,000 customers. By comparison, Tanzania’s central grid has installed generation capacity of approximately 1,500MW, with mostly hydro and natural gas. 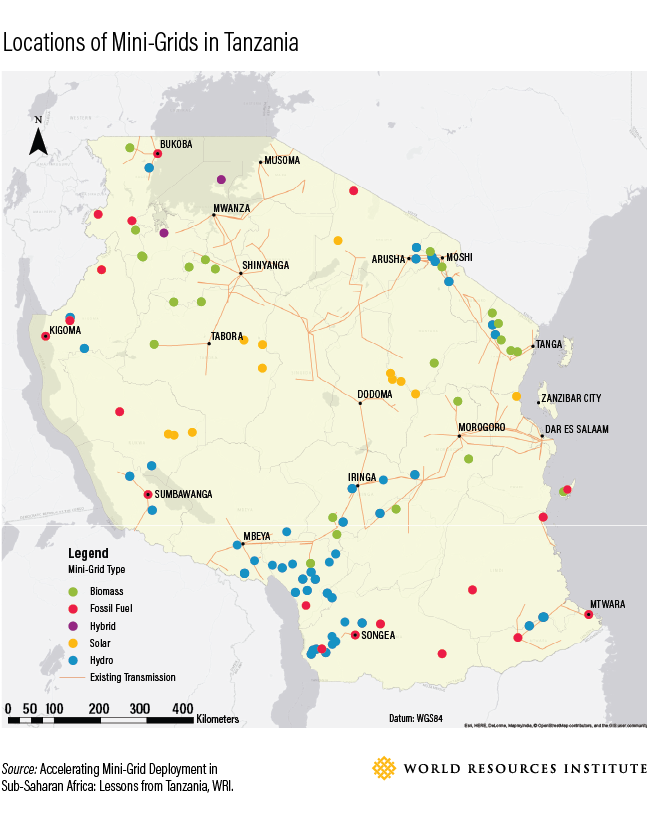 What can we learn from Tanzania?

A new report from Tanzania Traditional Energy Development Organization (TaTEDO) and WRI examines Tanzania’s mini-grid experience and proposes five key action areas that energy practitioners across the continent can focus on to accelerate the deployment of this electrification option in their countries.

Build up knowledge and make information about mini-grids available and accessible.

There is a dearth of knowledge about mini-grids, even in countries where they have been used. Understanding how these systems have fared in the past and the reasons for their success and failures is essential for successful future deployments. Likewise, maintaining an active database of existing mini-grids—their technical characteristics, funding sources and tariffs, as well as their quality-of-service metrics—could be valuable to stakeholders involved in mini-grid implementation.

Having a policy and regulatory framework that can be easily adapted to changing circumstances can ensure that lessons learned along the way are integrated into future regulatory and policy improvements. In 2015, Tanzania revised its 2008 Small Power Producer framework to account for price differentials in implementing different mini-grid technologies. The 2008 framework set technology-neutral feed-in tariffs, which failed to encourage solar and wind mini-grid development due to their higher costs; the 2015 framework instituted technology-specific tariffs to address this barrier. In 2017, Tanzania launched a third generation mini-grid framework that introduces guidance on grid integration and simplified licensing and registration requirements.

Streamline licensing and permitting procedures outside the electricity sector.

Mini-grid developers must acquire several licenses, permits and clearances to build a mini-grid. Many of these—for land rights, water rights, environmental clearances and others—involve institutions outside the energy sector. Despite the utility regulator (EWURA)’s, streamlined regulatory process, procuring such documents can be time-consuming and result in significant implementation delays. It is important that governments focus on coordinating the activities of all the different licensing/permitting agencies, creating a one-stop-shop where developers can obtain the clearances and licenses they need.

Build the capacity of mini-grid developers, especially local ones.

Build a robust understanding of the impacts of mini-grids on development.

Mini-grids can support local development efforts by enabling income-generating activities and promoting agriculture, health and education. These sectors will also create sustained demand for mini-grid electricity, ensuring the financial viability of the systems over time.

Given the critical linkages between mini-grids and development, governments and developers must invest resources into systematic qualitative and qualitative studies that can inform rural development programs and energy access strategies.

Advancements in technology, falling prices of renewable technologies and emerging innovative business and delivery models are aligning to make mini-grids a transformative solution in sub-Saharan Africa. With useful lessons provided by countries like Tanzania, energy practitioners in the region can now learn from others’ experience and act.