COVID-19 Bailouts Should Target Oil and Gas Workers and Communities, Not Companies

As COVID-19 wreaks havoc across the U.S. economy, the oil and gas industry is a major casualty. U.S. petroleum consumption has fallen to its lowest level in decades due to travel restrictions and the economic slowdown. The U.S. Energy Information Administration forecasts crude oil production will fall to 11.7 million barrels per day (b/d) this year and further to 10.9 b/d in 2021, compared to a 2019 average of 12.2 b/d.

The oil and gas crisis has significant implications for the thousands of workers the industry employs as well as for local communities its revenues support. To ensure that these workers and communities are not collateral damage in the pandemic-fed downturn or during the longer-term energy transition, any government response — whether as part of an immediate COVID-19 stimulus package or longer-term economic recovery policy — needs to prioritize support for oil and gas workers and communities instead of bailing out corporations.

My colleagues have highlighted how the U.S. COVID-19 response has provided targeted relief to oil and gas companies without benefitting their workers who have lost jobs.

Boom-and-bust cycles have long been a feature of the energy industry, but they are taking on new urgency at a time of investor skepticism, increasing pressure to mitigate climate change risk and structural and financial problems. Globally and within the United States there is an inevitable shift occurring away from fossil fuel and towards clean energy.

The challenge confronting policymakers is how to manage the low-carbon transition well and ensure a fair transition for fossil fuel workers and communities, rather than trying to prevent or delay the inevitable.

Employment and fiscal data detailed here show how volatility in the U.S. oil and gas industry poses serious risks to the economic health of the states and regions where the industry is a major player. Because economic impact varies by region, policy solutions need to be tailored for regions most likely to be affected.

There are options to help oil and gas workers and communities manage the challenges of volatility and prepare for a future with uncertain fossil fuel demand.

The oil and gas industry employed nearly 470,000 people across extraction, drilling and support activities in 2019. These jobs are concentrated in a few areas whose local economies are significantly impacted anytime there is a downturn in the industry. In Texas, oil and gas jobs account for only 2% of the state's private sector employment, but significant portions of the state's regional economies are tied to oil production, refining and distribution. Wyoming and North Dakota have the highest share of private sector jobs in the oil and gas industry, at 6% and 5% respectively.

For more than a decade, the Permian Basin in West Texas and southeast New Mexico, the Bakken oil region of North Dakota, the Niobrara shale formation in northeastern Colorado and parts of adjacent Wyoming, Nebraska and Kansas, and the Anadarko shale play of West-Central Oklahoma have been the epicenters of a U.S. oil and gas boom. This has led to rising demand for labor in oil and gas exploration, drilling and production. Out of 316 counties with oil and gas jobs, five of the top 10 are in Texas, two in North Dakota, two in New Mexico and one in Utah. In these counties, oil and gas jobs account for more than 22% of private sector employment.

However, COVID-19 and a global oil price war have led to record-low prices and worker layoffs. According to one estimate, the oil and gas industry lost 51,000 drilling and refining jobs in March alone and major fossil fuel companies are announcing pullbacks in their drilling operations and spending.

Another way to estimate employment in the oil and gas industry is to look at rig counts as a measure of exploration and drilling activity. The U.S. active rig count has fallen from 796 at the beginning of this year to an all-time low of 251 at the end of July. The previous lowest point on record was 404 rigs during the height of the 2014-2016 oil bust.

Studies examining the impact of drilling for oil and gas on immediate and longer-term employment foretell the possibility of significant job loss in energy states if the oil crisis continues. One study estimates that each additional rig creates 31 jobs immediately and 315 in the long run as employment spills over to other parts of the economy that support the oil and gas industry. Another study estimates that removing an active rig "eliminates 28 jobs in the first month, 82 jobs after six months, and 171 jobs in the long run."

The Impact of Coronavirus on State Budgets

The oil bust also adds to the revenue woes of several energy producing states and local governments that are dependent on severance tax revenues (taxes on how much oil, gas or other natural resources are extracted). In 2019, these taxes comprised less than 2% of total taxes collected by most U.S. states, but for some states, they are a significant share of total taxes, from a high of 53% in North Dakota to 50% in Alaska, 32% in Wyoming, 20% in New Mexico, 11% in Oklahoma and 9% in Texas.

In addition to direct taxes on oil and gas extraction, the industry pays other taxes including corporate and personal income taxes, property taxes, sales tax and royalties. There are, however, a myriad of tax breaks and subsidies provided to the oil and gas industry by states and the federal government that lower the taxation of oil and gas production and ultimately cost states millions in lost revenue. 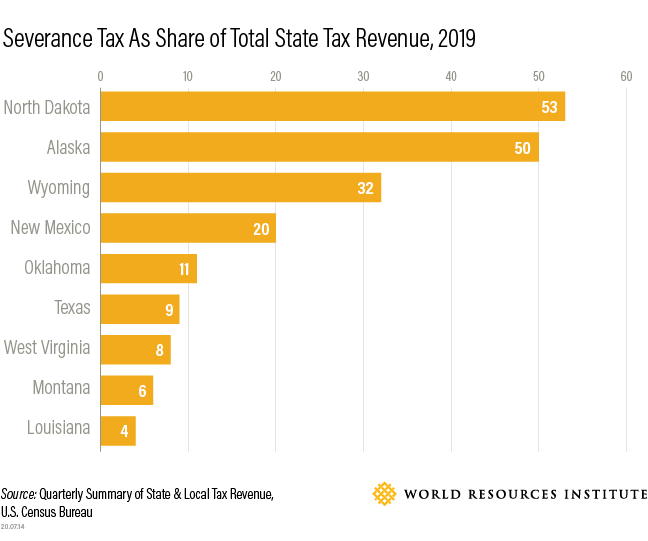 More importantly, severance taxes are extremely volatile as a revenue source because they are influenced by fluctuations in global energy prices. At the peak of a boom cycle, jobs abound, wages grow due to increased demand for labor, companies make windfall profits and local economies grow. But when the bust comes, state and local economies face budget cuts, painful decisions about infrastructure and public services investment, and economic slowdown. 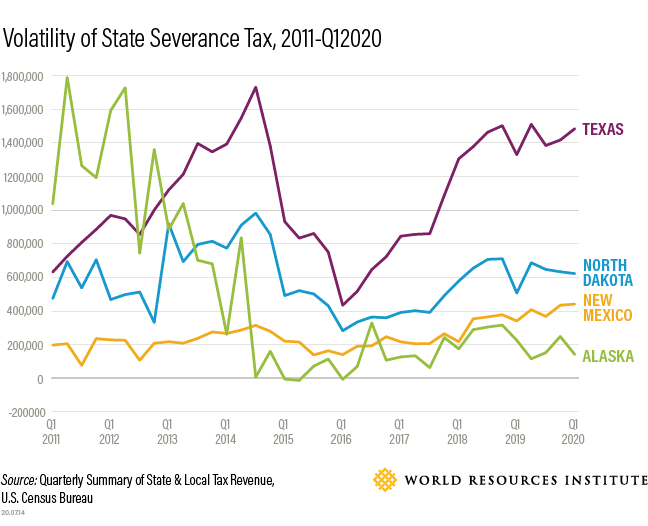 In response to the recent oil crisis, Louisiana has decided to delay the collection of severance tax by two months and is considering completely suspending the taxes, which would have serious implications for the state's operating budget.

The oil and gas industry has seen downturns like this before and many states have created rainy day funds to stabilize their budgets. A few states have created permanent trust funds to cushion their economies from the volatility of boom and bust cycles. However, permanent trust funds are not necessarily going to shield the economies of oil- and gas-producing states from the long-term structural changes we are seeing in the industry in response to the decarbonization push and cheaper renewables.

The best long-term strategy for regions that depend on oil and gas is to diversify their economies.

Texas provides some lessons on how states can achieve that, though state-wide economic diversification is not a total shield from volatility for its leading oil-producing regions. Since the 1980s, the Texas economy has branched out into service-providing industries, particularly financial and business services.

More importantly, Texas has severed its oil and gas sector from the rest of the economy. Its financial and business services are no longer reliant on the oil industry, but have established strong links to a wide range of sectors such as technology, defense and renewable energy that can thrive irrespective of whether the price of oil is $20 or $100 per barrel.

Texas's success has been attributed to a combination of policies to build industry clusters and attract business, and to factors such as favorable demographics, cheap and plentiful land, and a location which enables international trade and immigration. Other oil-dependent states like New Mexico and Wyoming have recently begun to think about diversification strategies to prepare for a future where oil demand is uncertain.

However, U.S. states cannot do this alone. The scale and timeline of this challenge requires federal government involvement to help oil and gas producing regions diversify their economies.

In the near-term, proposals to pay laid-off oil workers to plug abandoned wells would not only address a growing environmental problem but also keep workers employed. The proposal has the backing of the Interstate Oil and Gas Compact Commission, an organization representing 31 states. Canada has implemented something similar by setting up a C$1.7 billion (US$1.2 billion) fund to clean up abandoned wells.

In addition to cleaning up oil wells, the federal government could consider employing oil and gas workers to restore brownfield sites. Approximately half of the estimated 450,000 brownfield sites across the nation are contaminated by petroleum, including leaking underground storage tanks at old gas stations.

Over the long term, ambitious federal and state policy solutions tailored to regions most likely to be impacted are required. The federal government has implemented programs to assist with long-term decline in some coal, military and trade-impacted communities, though evidence about the effectiveness of those programs has been mixed. No similar program exists for oil and gas communities facing periodic volatility and perhaps long-term decline.

A group of scholars have recommended that Congress should instruct the Department of Commerce's Economic Development Administration (EDA) to provide grants to oil-dependent regions and fund economic diversification. Grants could be based on clearly defined eligibility criteria such as share of workforce employed in the industry or levels of oil production or drilling.

Locally-owned planning is crucial to the success of regional economic development efforts and EDA should follow a bottom-up strategy of working with regional bodies. The Appalachian Regional Commission, a federal-state partnership which provides grants to businesses to invest in the region and help create more diversified economy, is a potential model.

It would be a mistake to dismiss the most recent bust in the oil- and gas-producing regions of the United States as a temporary blip. The economic crisis brought on by COVID-19 should be viewed as an opportunity to jumpstart a much-needed conversation around the need to diversify the economies of oil and gas producing regions, and to focus on fair transitions for fossil fuel workers and communities in the context of fossil industry decline arising from climate action.