A Closer Look at the Shaheen-Portman Energy Efficiency Bill

New energy efficiency legislation has been introduced by Senators Shaheen and Portman that could come before the U.S. Senate as early as this month. This bill, formally known as the Energy Savings and Industrial Competitiveness Act of 2013 (S. 761), provides goals, incentives, and support for energy efficiency efforts across the U.S. economy. Passage of this bill would be a positive step toward saving money through improved efficiency while helping reduce greenhouse gas emissions.

What Is the Energy Savings and Industrial Competitiveness Act?

On May 8th, the Shaheen-Portman energy-efficiency bill passed the Senate Energy and Natural Resources Committee by a 19-3 vote. In a period where Congress has struggled to pass new legislation, it is notable that this bill has broad, bipartisan support and was voted out of committee with seven Republicans and 12 Democrats in favor.

The bill is a slimmed-down version of earlier legislation introduced as S.1000 in 2011. Through a mix of building codes, financing, voluntary labeling, technical assistance, and rebate programs, the bill promotes efficiency improvements in residential and commercial buildings and industry. Legislative promotion of energy efficiency is a bipartisan step in the right direction for addressing U.S. energy and climate challenges.

What’s the Potential Energy and Emissions Impact of Efficiency Improvements in the United States?

In 2010, the National Academy of Sciences found that the United States could cost-effectively reduce its 2020 energy consumption by 17-20 percent through expanded use of energy efficiency technologies. The concept of energy efficiency can apply broadly to the economy (where it’s measured in total energy use per unit of GDP) or focus on end-uses such as appliances, buildings, and manufacturing processes—with varying savings potentials. Recent WRI research indicates that pulp and paper mills in the Midwest, for example, could reduce carbon dioxide emissions by 30 percent through energy efficiency improvements using existing technologies and practices.

In terms of addressing climate change, energy efficiency offers one of the most cost-effective ways to reduce energy use and carbon dioxide pollution. Efficiency has a supportive role in the Climate Action Plan recently announced by President Obama, and can help the country meet its emissions-reduction targets. Although U.S. energy-related carbon dioxide (CO2) emissions have recently dropped to their lowest levels in nearly 20 years, CO2 emissions are forecast to increase in the coming decades. Without market changes or policy interventions, the United States is expected to exceed its 2020 emissions-reduction target of 17 percent below 2005 levels by more than 470 million metric tons carbon dioxide. Energy efficiency measures—such as those included in the Sheehan-Portman bill—can play a win-win role by reducing energy and environmental-compliance costs as well as emissions.

The 2013 Annual Energy Outlook (AEO) includes a scenario that highlights the emissions-reduction potential of ambitious energy efficiency measures in the residential, commercial, and industrial sectors. According to this AEO efficiency scenario, energy efficiency improvements in the residential, commercial, and industrial sectors could cover 47 percent of the gap between business-as-usual emissions and the U.S. 2020 target (AEO efficiency improvements would reduce emissions by 220 million metric tons carbon dioxide, as shown in the figure below). 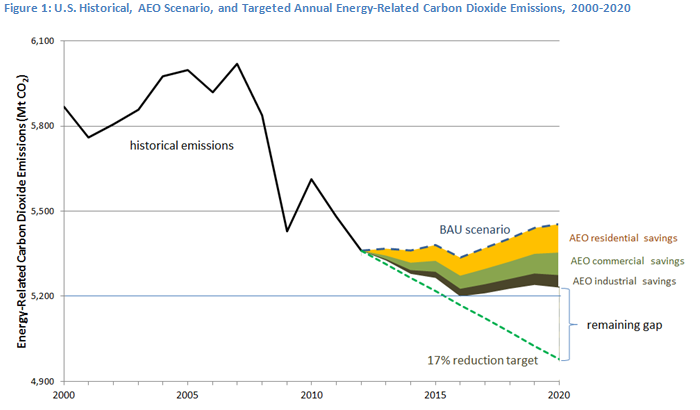 How Far Does the Bill Go to Realize U.S. Energy Efficiency Potential?

The Shaheen-Portman bill contains a variety of policies and programs to reduce residential, commercial, and industrial energy use. Because key provisions are voluntary or leave significant discretion for implementation to the Secretary of Energy, the bill’s exact emissions implications are uncertain. In other words, the Shaheen-Portman bill is not likely to achieve 2020 sector emissions reductions as large as those described in the Department of Energy’s ambitious AEO scenario (see figure above). The table below provides a sector-by-sector breakdown of how the Sheehan-Portman provisions compare to the AEO 2013 scenario.

Which Sectors Are Affected?

The Shaheen-Portman bill focuses on sectors and areas with known energy-savings potential. Residential, commercial, and industrial sectors—the bill’s main targets—accounted for two-thirds of U.S. energy-related carbon dioxide emissions in 2011. In particular, buildings, industry, electric motors, and transformers have large energy-savings potential. The recent identification of the federal government as the fourth-largest single source of U.S. emissions highlights the significance of the bill’s federal agency energy efficiency provisions. Potential government impacts are not covered here, as they are not included in the AEO scenarios.

Overall, the provisions of the bill provide original and effective ideas on key areas to reduce emissions. If all voluntary provisions of the bill are indeed acted upon, real progress could be made. However, given the language in the current bill, additional authority is needed to guarantee substantial energy and emissions impacts.

What More Can Be Done?

On June 25, 2013, President Obama presented a broad and ambitious agenda with his Climate Action Plan. The Climate Action Plan presents specific efficiency targets—such as the federal government’s goal of sourcing 20 percent of its consumed electricity from renewable sources by 2020—that can be well-supported by the Shaheen-Portman bill. The Plan also includes important provisions outside the scope of the Shaheen-Portman legislation, such as a memorandum directed at cleaner electricity production that will provide important emissions reductions.

There are several ways the Sheehan-Portman bill can be bolstered to ensure greater adoption of energy efficiency opportunities and reduced carbon pollution, thereby facilitating implementation of the President’s Climate Action Plan. For example, it could further stipulate mandatory building energy codes for new and existing residential and commercial buildings. It could promote more ambitious industrial savings by establishing minimum efficiency performance standards for new equipment, improving utility-manufacturer collaboration on energy efficiency, and expanding the benchmarking (measurement, evaluation, and reporting) of manufacturing energy efficiency performance. At the state level, more ambitious legislation could include a State Energy Race to the Top Initiative to support and reward progress toward the longer-term goal of doubling energy productivity by 2030. Beyond energy efficiency, stronger legislation could also measure and account for the climate change impacts of the bill provisions. From a sector perspective, energy and emissions efficiency legislation could also be more effective if it included transport and electric power sectors, as in the White House Climate Action Plan.

While further action will be needed to implement the Climate Action Plan and bridge the emissions gap between now, 2020, and beyond, the Shaheen-Portman bill is a step in the right direction.

U.S. Industry Exposure to Climate Costs Based On Energy Intensity and Imports

Table: Regional Climate Initiatives in the United States and Canada