ASEAN Leaders Can Act to Reduce Fires and Haze

For further reading, see our op-ed in the Jakarta Post.

Less than four months ago, millions of people across Singapore, Malaysia and Indonesia were choking on the worst air pollution ever recorded in Southeast Asia as hundreds of fires burned across Sumatra. The fires caused serious damage, eliciting a public health emergency, closing schools and harming tourism and other businesses.

This week the Sultan of Brunei is hosting many of Asia’s heads of state for the 23rd Association of Southeast Asian Nations (ASEAN) Summit. Preventing new fires and haze are high on the agenda. Key decisions and actions are urgently needed from the presidents and prime ministers this week. ASEAN ministers met in July to discuss this issue but failed to agree on significant actions; leadership is needed to solve the ongoing problem.

The World Resources Institute (WRI) has been closely monitoring the fires and haze since June. We have published several analyses highlighting the locations and patterns of the fires and we suggested steps that policymakers, companies and others could take to reduce the risk of future fires and haze. We are now able to share the summary findings from a more detailed analysis of the June fires using high resolution satellite imagery (see text box below for technical details).

The findings and their significance are as follows:

1) Over 1,500 square kilometers of land burned in the study area in Riau Province during the June fires and haze crisis. This was a large-scale environmental and human disaster that demands a thorough response from policymakers.

The fires burned an area more than twice the size of Singapore, in the study area alone, and left behind large burn scars resulting in significant economic and other damage to forests and communities. WRI selected the 2.2 million hectares (ha) study area by examining areas with the highest density of fires. The study area and time frame were limited in scope due to the availability and expense of high-resolution satellite imagery. It is important to note that the amount of burning across the region was much more extensive than is reported here, as many fires fell outside of our study area.

Earlier WRI analysis showed that fires on this scale have occurred three times in the last ten years alone. The ASEAN Summit is the perfect opportunity for the region’s leaders to acknowledge the seriousness of these fires and the strong chance that they will recur soon unless concrete, collaborative steps to address the challenge are adopted. This could include measures such as establishing a blue ribbon panel of government, business and civil society leaders to develop priority recommendations for action by early 2014, with a commitment to follow through ahead of the next burning season later that year.

2) Many of the fires were illegal. They burned on peatland and in some cases protected areas, including the globally significant Tesso Nilo National Park.

The new analysis found that 72 percent of the fires in the study area burned on peatland (a soil layer, often several meters deep, composed of partly decomposed organic material). Furthermore, extensive burning occurred in Tesso Nilo National Park, where 700 hectares of the 6,000 hectares within the study area was burned. Burning peatland and protected areas is illegal under Indonesian law. Burning peatland also results in high greenhouse gas (GHG) emissions, so much so that the emissions resulting from the fires will seriously reduce Indonesia's ability to meet its GHG emissions reduction targets. Concession-holders and the Indonesian government should invest more in fire prevention in these areas and faster fire response capabilities.

WRI’s high resolution analysis found some very extensive and highly clustered large burn scars. Comparison with 2013 concession maps from the Indonesian Ministry of Forestry show which companies appear to have licenses to operate in these areas. As Figure 3 below shows, the largest clusters of burn scars were found on pulpwood concessions, while other large burn scars were also seen on oil palm concessions. Figure 4 below shows the extent of burn scars within two concessions that exhibit particularly large burned areas. As WRI has stressed, these results do not necessarily mean these companies are the instigators of the fires or are responsible, given known inaccuracies in the concession maps available for analysis. Responsibility for the fires can be assessed only with thorough, impartial investigations on the ground and more detailed concession maps. Therefore it is a priority that governments and companies commit to making all concession data public. 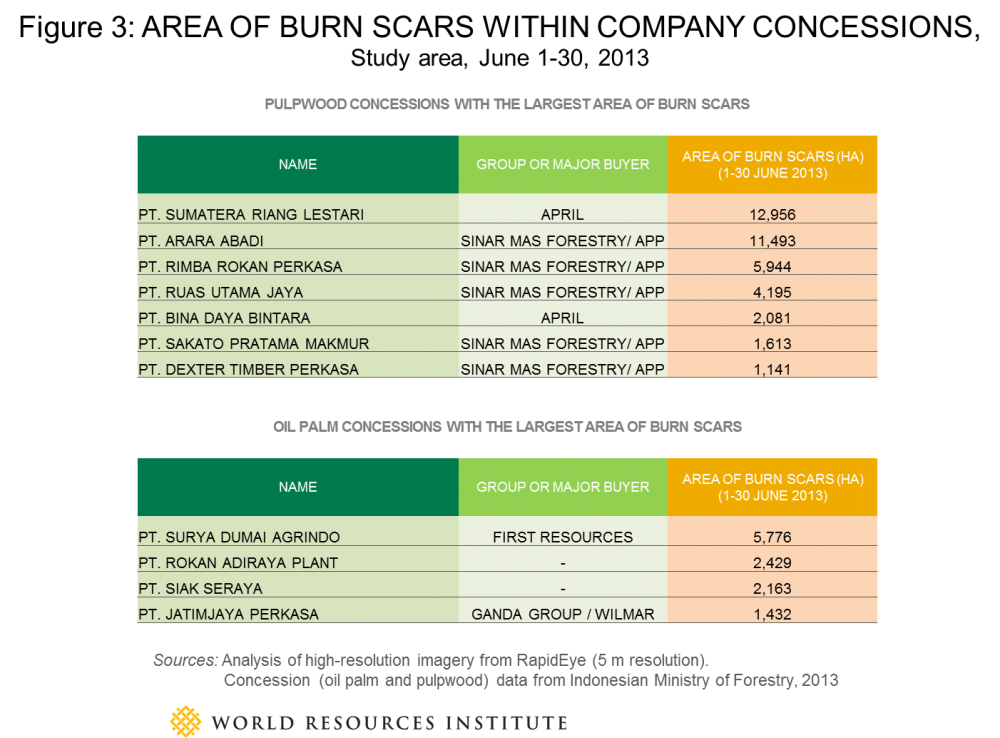 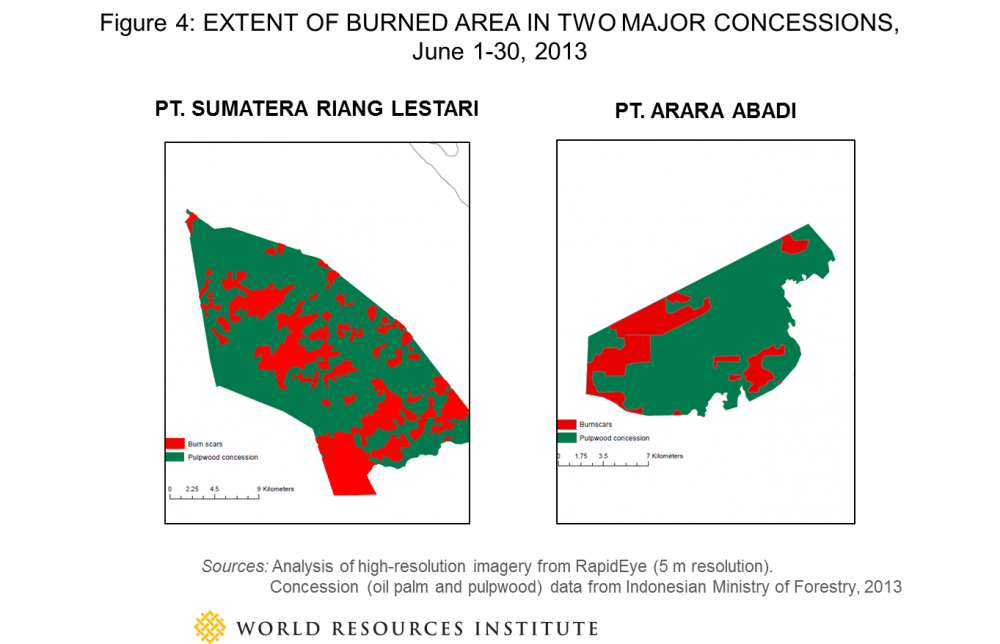 4) Decision makers across Southeast Asia can use the NASA daily fire alerts to monitor fires with confidence.

WRI analysis shows that the medium-resolution NASA MODIS FIRMS system correctly detected fires 97 percent of the time, when compared with expert visual and GIS analysis of high-resolution imagery. This directly addresses a concern from many stakeholders about the accuracy of the NASA data. Not only is the NASA data highly accurate, it is also updated every day and available for free to everyone. Policymakers thus can focus on the steps needed to prevent fires and respond rapidly when they are detected, and do not necessarily need a new (expensive) monitoring system.

Further refinement of the analysis summarized here is impeded by the poor quality of the publicly available concession maps for Indonesia. The heads of state meeting this week at the ASEAN summit should agree to publicly release the concession maps in their respective countries and to accelerate efforts to improve the quality of those maps. This will support more effective law enforcement, improved coordination between government agencies and between local and national governments, better analysis from universities and researchers, and the ability to develop of measures to prevent future fire and haze disasters. A commitment to transparent management of the fires and haze issues would go a long way to enabling many organizations to collaborate to address the challenge.

The high resolution satellite imagery and methods used in this analysis

WRI obtained high resolution imagery from the RapidEye system which provides multi-band optical images with 5 m resolution ideal for seeing the burned areas left after fires, known as “burn scars.” Images were acquired for an area of 2.2 million hectares of Riau Province, Sumatra, Indonesia from before and after the June fires. Scenes were selected covering 50 percent of all of the fires alerts reported by the NASA MODIS FIRMS system during June 2013 for Riau Province.

The RapidEye satellite data was mosaicked for all dates after June 30, 2013 and interpreted by visual inspection and digitizing on-screen. The satellite data were interpreted as visualized with a combination of bands 5,4,3 (Red, Green, Blue). Figure 5 provides an example of RapidEye imagery with the burn scars clearly visible in black and gray. 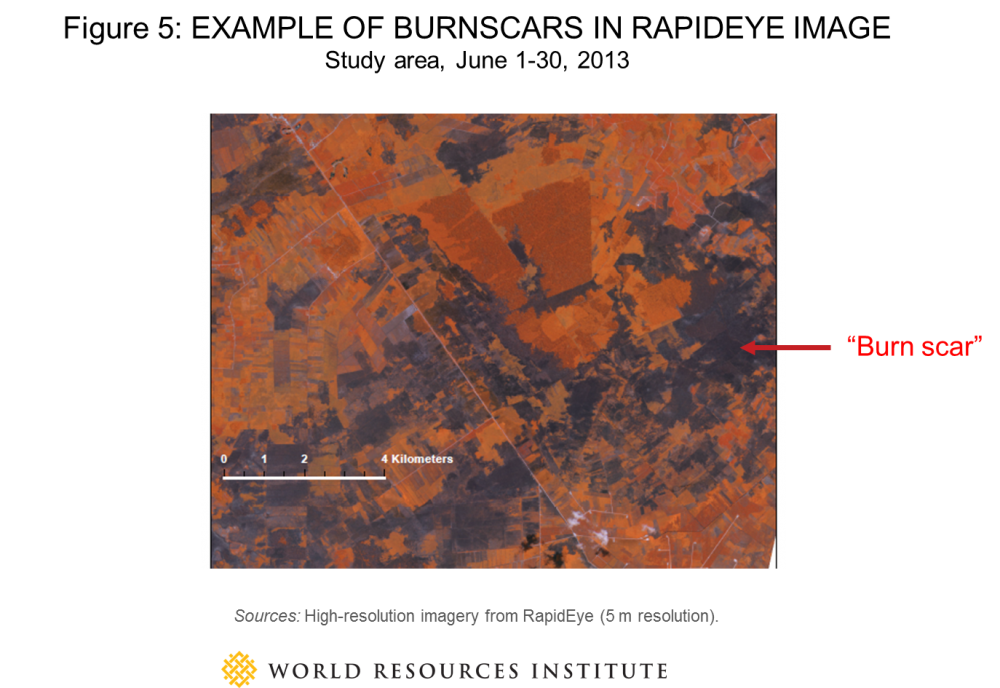 RapidEye (https://www.rapideye.com/) has a constellation of five satellites in orbit that contain identical sensors calibrated equally to deliver 5 m resolution data after orthorectification.

In this study orthorectified RapidEye data were obtained for 2.2. million ha for dates after 30 June 2013 (dates ranged from 7-July-2013 to 26-August 2013). The absence of short wave infrared band made it difficult to apply one of the common fire detection algorithms. Therefore, two methods were tested, an automatic detection system based on drop in NDVI and closeness to NASA FIRMS hotspots (with Google Earth Engine) and a visual interpretation using ESRI ArcMap 10.1.

Because of cloud cover that impaired the automatic classification, visual inspection was used in this study. Because of the high resolution data, visual interpretation was simple. The smallest mappable unit was chosen to be 5,000 m2 (0.5 ha).

The RapidEye data was displayed as a 5, 4, 3 band combination (Red, Green, Blue) and interpreted into four classes (clear burn, complex of small burns, clear-cuts without burn signs, no burn). In further analysis only the clear-burn areas were used to derive statistics.

The burnscar interpretation was projected to UTM 47 N and statistics were derived via GIS analysis with MODIS FIRMS data, and Indonesian Ministry of Forestry data on National parks (2006) and Oil Palm concession and Pulp concessions (both 2013).

We assume that by using only the “clear-burn” class and the 0.5 ha smallest mappable unit that we underestimated the burned area. The estimates resulting from this study should therefore be considered as conservative.