Is Adaptation Short-Changed? The Imbalance in Climate Finance Commitments

One of the biggest successes from 2009’s COP 15 conference was securing funding for climate change adaptation and mitigation in developing countries. Donor nations agreed to “provide new and additional resources […] approaching $30 billion for the period 2010–2012, with balanced allocation between adaptation and mitigation.” They also committed to mobilize $100 billion a year by 2020.

But the agreement left a key question unresolved: how should funding be “balanced” between adaptation and mitigation? Should the funding balance be 50/50 between adaptation and mitigation or should it based on each country’s needs? Should funding include both private and public sector investment? These are some of the questions that negotiators will need to address during COP 19 in Warsaw.

But whatever they decide as being a “balanced commitment,” one thing is clear: finance for adaptation needs to increase in the coming years.

The $100 billion climate finance by 2020 commitment was negotiated to “address the needs of developing countries,” but these needs often differ from country to country. For example, Least Developed Countries and Small Island Developing States need significant investments to deal with the impacts of climate change—to which they are particularly vulnerable—but probably require less investment for low-carbon development. In 2010, these nations only contributed 6 percent of all greenhouse gases. 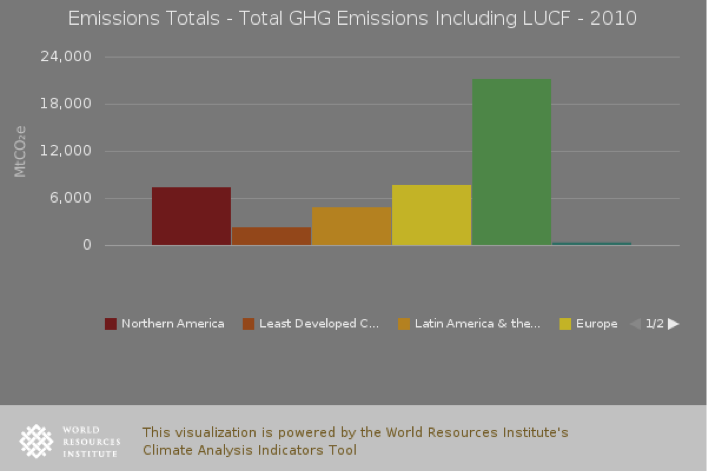 The COP 15 agreement also stated that “funding will come from a variety of sources: public, private, bilateral and multilateral, including alternative sources of finance.” Developed countries have stressed the need to leverage private sector funding to reach their $100 billion commitment. Indeed, the Landscape of Climate Finance 2013 reports that the private sector plays a key role in funding mitigation activities.

However, our knowledge of how the private sector can contribute to adaptation in developed countries is still limited. A Stockholm Environment Institute study suggests that, in general, private sector finance is unevenly distributed and often does not address the most pressing development needs. Also, because adaptation projects typically provide public goods - such as flood protection or increased resilience (through income diversification)—it can be hard to attract private investments.

No Balance in Public Finance Commitments

Unfortunately, finance from public sources has not achieved a balance between adaptation and mitigation commitments. A report from WRI’s Open Climate Network finds that of the $35 billion in climate finance raised by contributor countries. only 17 percent went to adaptation. A closer look at several adaptation finance flows confirms this imbalance.1 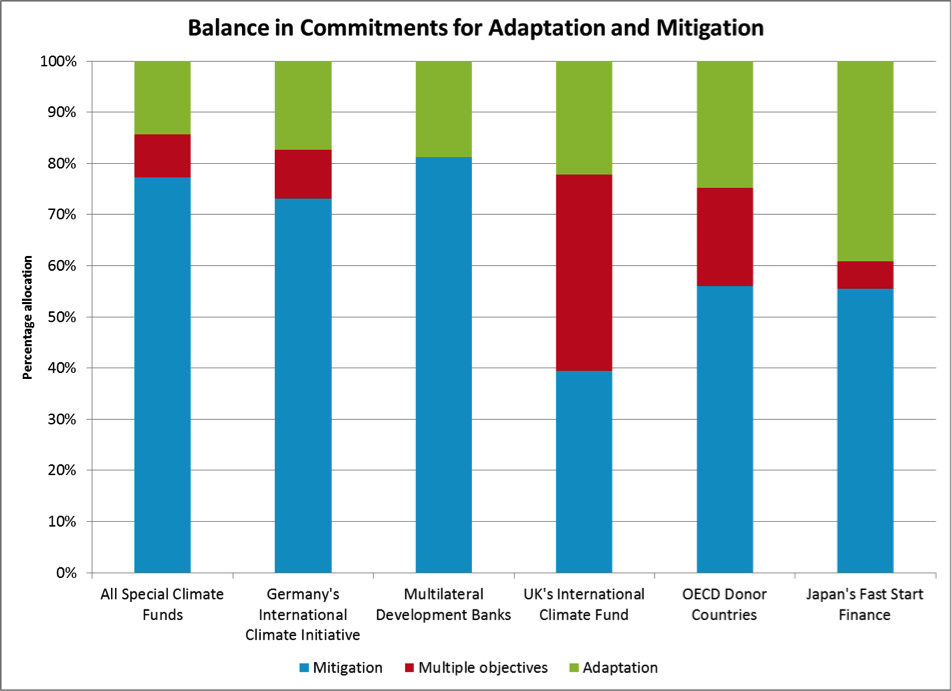 How Can We Achieve “Balanced” Climate Finance?

While imbalance clearly exists in climate finance, the route to a more balanced allocation remains hazy. Until now, countries have struggled to define what “balanced” means under UNFCCC commitments. Negotiators gathering in Warsaw should consider three options:

Every dollar invested now in mitigation means fewer dollars needed tomorrow for adaptation . Striking a balance across time instead of across portfolios is appealing in the abstract, but even that kind of balance would not remove the need for adaption.

Even if we halt all emissions today, temperatures will keep rising, meaning we would still need to adapt to the impacts of climate change. Because adaptation needs are unevenly distributed across the globe, defining balance across time rather than geography could risk creating new inequities among countries. The global community must develop a definition of balance that ensures adaptation needs are not left unmet.

Balancing adaptation and mitigation is not easy, but it is important to facing the challenge of climate change. We know developed countries must increase their finance ambitions in order to fulfill their commitment to provide $100 billion a year by 2020. Ultimately, defining “balance” correctly is a critical step to meeting the world’s climate financing goals.