5 Major Takeaways from the IPCC Report on Global Climate Change

Earlier today, the Intergovernmental Panel on Climate Change (IPCC) released the Summary for Policymakers of Working Group I’s (WGI) portion of the 5th assessment report (AR5) on climate change. The report, focused on the physical science of our climate system, confirms the overwhelming scientific consensus that the world is warming and human activities are responsible. Without immediate action to curb greenhouse gas emissions, communities, ecosystems, and critical infrastructure across the globe will be increasingly threatened by dangerous impacts from flooding, drought, sea level rise, and wildfires.

Published every six years, the IPCC Assessment Reports are the most comprehensive international assessments on the state of climate science. Similar to prior studies, AR5 is the product of a consensus-based process combining the most current scientific data with input from more than 800 climate scientists from dozens of countries.

While the underlying science of this most recent report is undeniably more advanced, it is remarkable that the AR5 report reads a lot like the IPCC’s AR4, published in 2007, reconfirming climate science. Also, with each new IPCC Assessment report, we see the emergence of climatic trends that were once projected to occur in the future, but are now a reality. For example, since 1990, climate scientists have expected higher temperatures to bring more extreme weather. Now such trends are well-documented—and projected to worsen.

So instead of asking only what’s new about this IPCC report, here are five of the most important takeaways—all of which have significant implications for decision-makers and society:

Worldwide, the three most recent decades were each warmer than every preceding decade since 1850. This IPCC finding is confirmed by the National Oceanic and Atmospheric Administration (NOAA) data, which found that the past decade was the warmest ever recorded. August 2013 was the 342nd consecutive month with a global temperature above the 20th century average – a staggering streak of more than 28 years.

There is consensus among IPCC scientists that most of the recent global temperature rise is “extremely likely” to have been caused by humans. This level of certainty is often compared to the scientific consensus that cigarettes are harmful to human health.

The IPCC, of course, is not alone in reaching this conclusion. For example:

Global surface air temperatures have risen more slowly in recent years, leading some to question the urgency of the climate change problem. However, this recent “pause” in warming is limited to the atmosphere; during the same time period, warming in the oceans has continued apace. In fact, the IPCC finds that our oceans retained more than 90 percent of the heat trapped by greenhouse gases since 1970. It is normal for heat energy to cycle back and forth between the air and ocean, on decadal time scales, which helps to explain the recent pause in warming of surface air temperatures. Rapidly warming oceans, though, cause thermal expansion, contributing to accelerating sea-level rise. 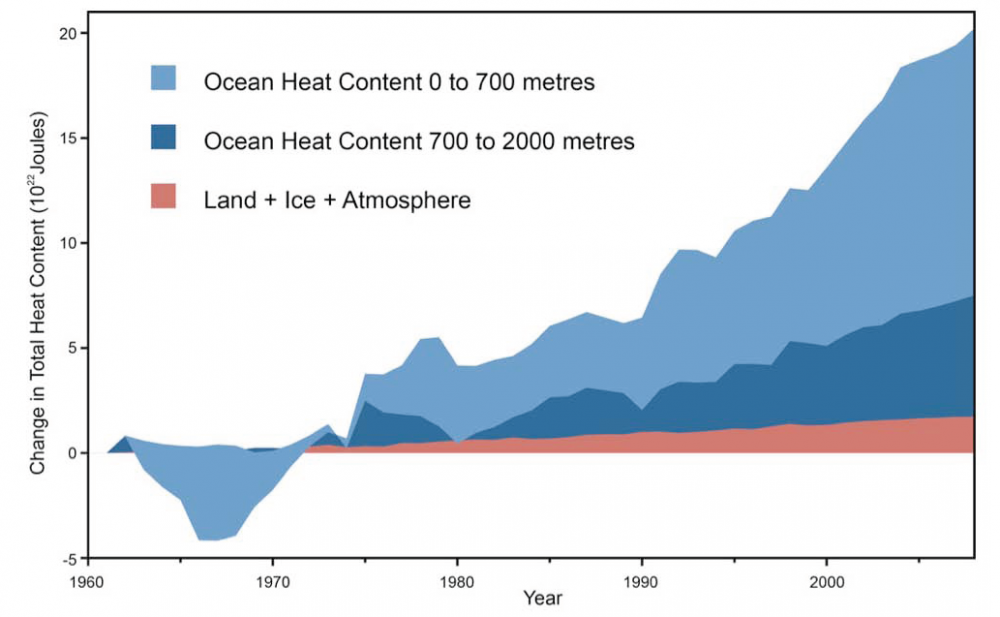 *The IPCC concludes that more than 90 percent of the heat trapped by greenhouse gases in the atmosphere have been absorbed by oceans. Figure Source: Nuccitelli et al., 2012 *

In addition to making our oceans hotter, rising carbon dioxide emissions is making them much more acidic. Ocean acidification and rising temperatures kill coral reefs, which support the livelihood of about 500 million people around the world. The IPCC finds that ocean acidification will increase under all future emissions scenarios, painting a troubling outlook for coral reefs and the communities that depend on them.

2) Many observed impacts are happening more quickly than previously predicted.

Sea-level rise is happening more quickly than expected. It’s already threatening many of the 1 billion people worldwide living in low-lying coastal communities. Sea levels rose almost twice as fast from 1993-2010 as they did from 1901-2010, and the IPCC says under all future emissions scenarios “the rate of sea level rise will very likely exceed the observed during 1971-2010.”

The IPCC finds that Greenland and Antarctic ice sheets have melted several times faster over the past decade than during the 1990s. Overall, the extent of summer Arctic sea ice has shrunk more than 11 percent per decade. In fact, under higher future emissions scenarios, the IPCC finds that the Arctic could have ice-free summers by 2050.

From severe flooding to raging wildfires and searing droughts, we are all witnesses to the impacts of extreme weather. In the United States alone last year, 11 weather and climate disaster events each caused losses exceeding $1 billion, cumulatively causing $110 billion in damages and 377 deaths. The IPCC finds that global warming is amplifying extreme weather and climate events regionally. This includes more frequent heat waves and a greater number of heavy precipitation events. In the North Atlantic, there has been a clear increase in the occurrence of intense tropical cyclones. Regional trends in drought and flooding are also emerging, with worsening conditions projected through the end of the century.

4) Business-as-usual will lead us far beyond 2 degrees Celsius of warming.

Continuing business-as-usual emissions could mean the very worst-case IPCC scenario, where global temperatures rise by more than 4 degrees Celsius (7.2 degrees Fahrenheit) above pre-industrial levels by 2100. Under this carbon-intensive emissions pathway, we would quickly burn through the carbon budget that enables us to remain within 2 degrees Celsius of warming. This is the maximum level of warming that the international community agreed to under the United National Framework Convention on Climate Change (UNFCC), which has the stated aim of preventing dangerous human interference with the climate system and associated impacts. Urgent action is needed to stay within this goal.

Earlier this year, atmospheric concentrations of CO2 reached 400 parts-per-million (ppm)--more than 25 percent higher than any time on Earth in the last 1 million years.

Considering we burned the first half of the world’s entire carbon budget over 250 years but are on track to exhaust the second half in the next 30 years, reducing carbon dioxide emissions is the most urgent global priority to stabilize our climate at relatively safe levels.

The IPCC finds that to avoid more than 2 degrees of warming, global emissions must fall by an average of 50 percent below 1990 levels by 2050. This requires urgent action: Our energy systems will take decades to fully decarbonize, given the time it takes for power plants and vehicle fleets to turnover, enabling a switch to low-carbon alternatives.

That’s the bad news, but solutions are available. Now is the time to act.

In the next year, the IPCC will issue two additional assessment reports. The second will focus on past and future impacts of climate change, including strategies for adaptation and building resilience. The third report will present the range of mitigation options and solution pathways.

Add it all up, and it’s clear we have not yet taken the needed steps to meet this urgent challenge—and our window to avoid locking-in catastrophic warming is closing fast. But the bottom line is that it isn’t too late. There’s still time to limit warming to 2 degrees Celsius.

What’s needed is bold action by the world’s leaders. To ensure a relatively safe and stable climate, we must enact new policies that drive economic investment into low-carbon technologies, reduce global emissions, and enhance the resilience of our communities and critical infrastructure.