As global carbon emissions continue to rise, the effects of climate change are increasingly felt through more severe storms, wildfires and flooding. The need to reduce greenhouse gas (GHG) emissions — such as through investing in energy efficiency, deploying solar panels and reducing deforestation, among others — is critical. At the same time, the latest climate science indicates that such efforts will not be enough to keep temperature rise below 1.5-2 degrees C (2.7-3.6 degrees F), which would prevent the worst impacts of climate change.

While efforts to reduce GHG emissions should always take priority, meeting climate goals will also require carbon dioxide removal (CDR) — systems that remove carbon directly from the air — likely at the billion-tonne scale by midcentury. The precise amount needed will depend on how fast the world curbs emissions. Carbon removal can take numerous forms, including natural and technological solutions that accelerate current carbon dioxide removal rates.

Direct air capture (DAC) is gaining traction as a promising carbon removal approach that will likely be a necessary part of a larger carbon removal portfolio. Careful consideration of DAC’s energy, land and water use will be needed to inform siting and to minimize resource impacts.

What is Direct Air Capture?

Direct air capture is a technological method that uses chemical reactions to capture carbon dioxide (CO2) from the atmosphere. When air moves over these chemicals, they selectively react with and remove CO2, allowing the other components of air to pass through. These chemicals can take the form of either liquid solvents or solid sorbents, which make up the two types of DAC systems in use today.

The captured CO2 can be injected underground for permanent storage in certain geologic formations or used in various products and applications. Permanent storage will result in the biggest climate benefit.

The carbon benefit of use in products depends on the product itself. Using the captured carbon for products such as construction material or plastics can also provide long-term storage (decades or even centuries). However, using the carbon for products like beverages would quickly re-release carbon into the atmosphere.

What are the Energy Needs for Direct Air Capture?

Recent research shows that coupling solid sorbent DAC with geothermal or nuclear power producers could be the first step to reaching the billion-tonne scale of removal necessary, as doing so could accelerate direct air capture deployment — potentially capturing up to millions of tonnes of CO2 per year. Early research is also looking into the possibility of coupling DAC to curtailed renewable energy.

While waste heat can power solid sorbent systems up to a certain scale, there is also an opportunity to power DAC through leveraging natural gas plants that would otherwise be retired before the end of their lifetimes in favor of renewable sources. This approach would need to be considered on a case-by-case basis and only pursued in economically favorable cases and with support from local communities.

This strategy would involve converting some portion of the natural gas fleet into combined heat and power plants coupled with carbon capture and storage (CCS, which captures carbon dioxide emissions from fuel combustion) to power DAC. This infrastructure, which otherwise would have been stranded, coupled with CCS, could provide power to the grid during times of peak demand. During non-peak hours, when excess renewable energy is produced, that renewable energy could power DAC. With this strategy, DAC would not directly compete with decarbonizing the grid and could make use of surplus renewable electricity.

After midcentury, these natural gas plants would reach the end of their life and the deployment experience from using them would help reduce the cost of DAC. Energy sources for DAC could then be re-evaluated and ideally shift to non-fossil resources. This would create a systems approach that leverages stranded natural gas assets, scales up renewables and supports scaling up DAC over the next three decades. 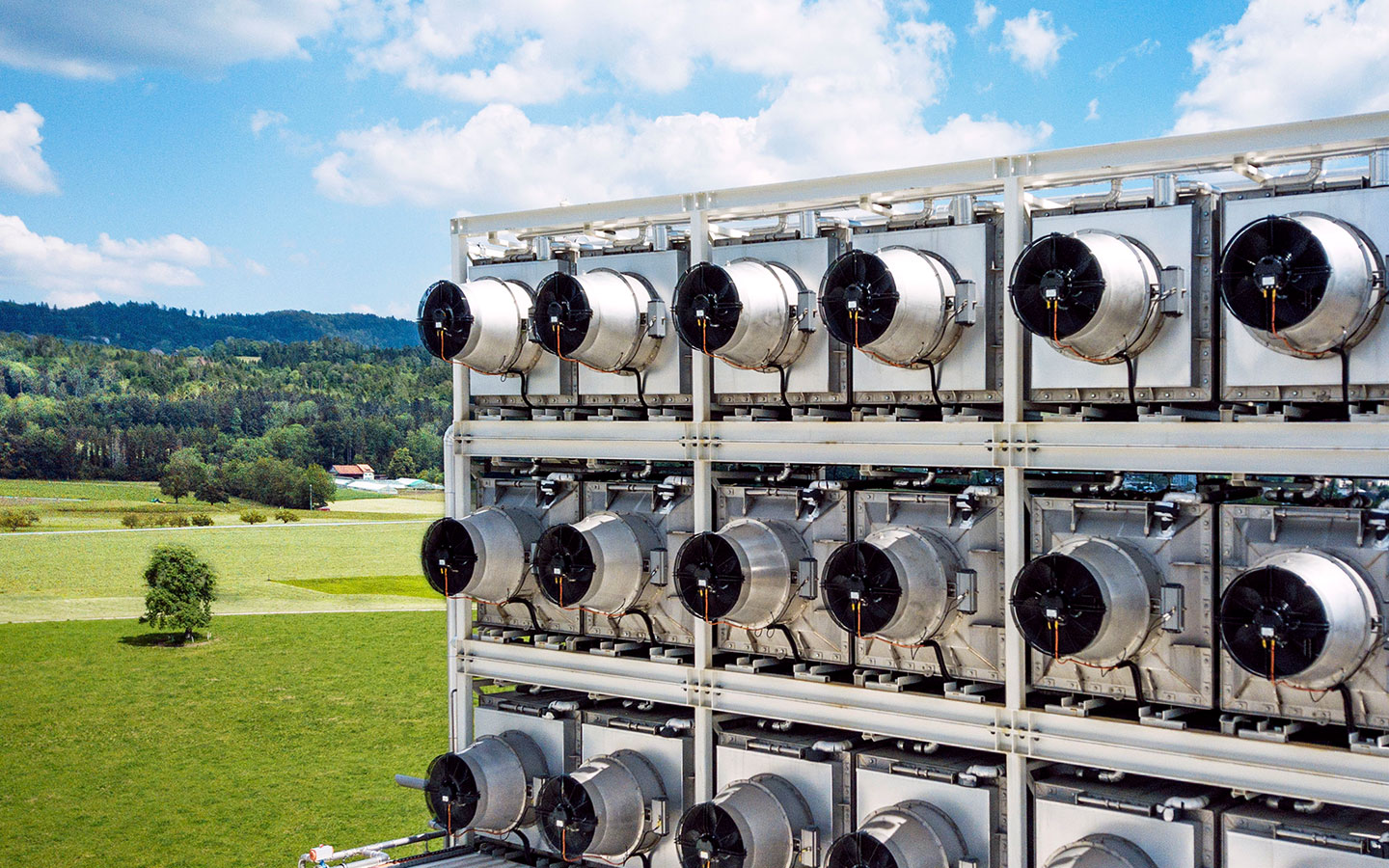 Climeworks’ first commercial direct air capture (DAC) plant, based in Hinwil, Switzerland. The fans draw in air, where the CO2 in that air reacts with chemicals that selectively bind it. Photo by Climeworks

What is the Impact of Direct Air Capture on Land?

One of the biggest benefits of direct air capture is siting flexibility. DAC does not require arable land, which can minimize impacts on food production or other land uses. DAC plants can be built near geologic storage sites to minimize transportation costs for storage, or near unused sources of waste heat to reduce impacts on the energy system.

Similar to energy requirements, the land area needed for large-scale DAC deployment depends on the type of DAC system and the energy resource powering it. For liquid solvent systems, each plant is larger in scale than solid sorbent plants because of cost advantages specific to building liquid solvent plants; they integrate multiple process units that benefit from economies of scale, whereas solid sorbent-based approaches benefit from the repetitive use of a single contactor geometry. As a result, solid sorbent plants are smaller and capture less carbon per year. 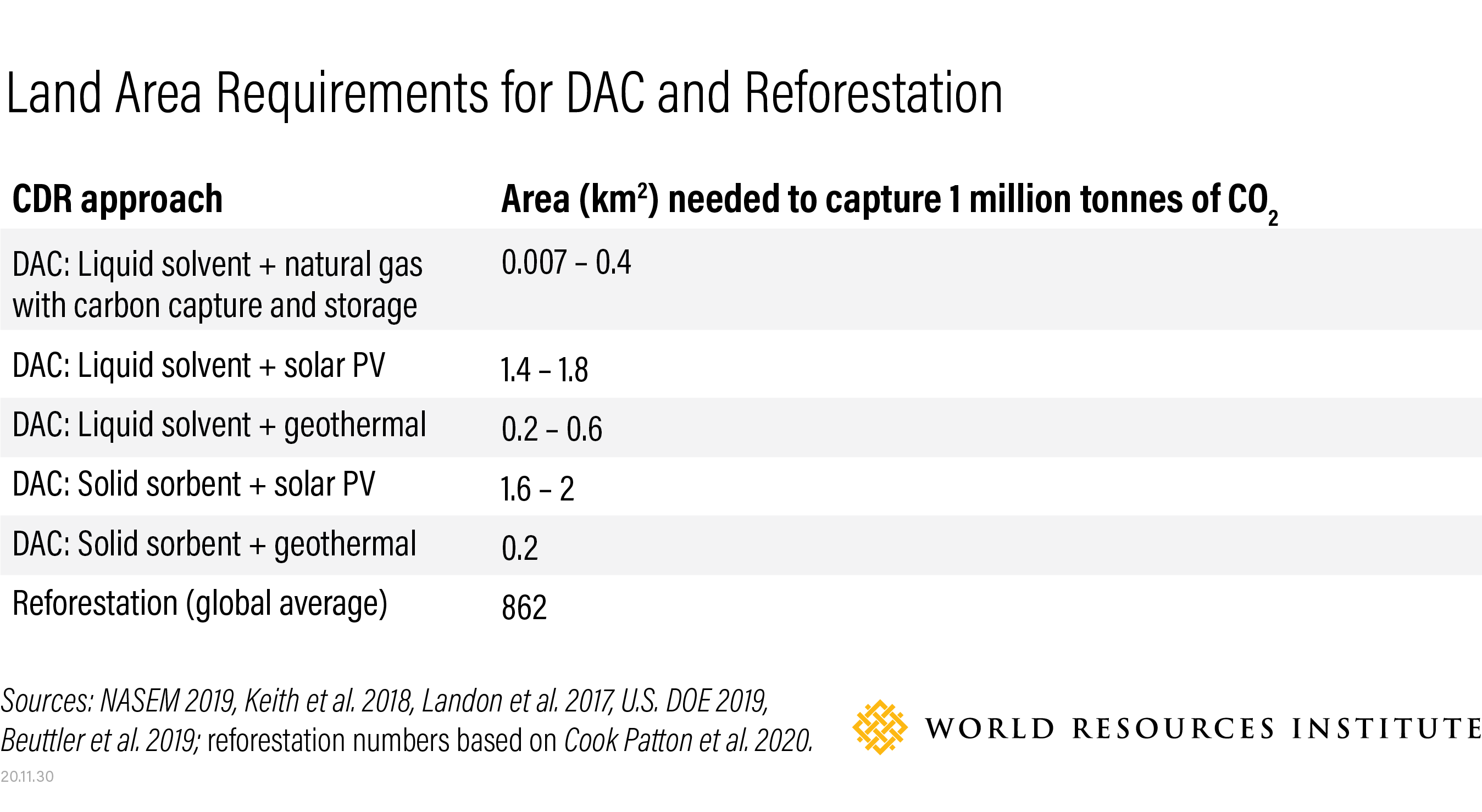 DAC requires a smaller amount of land per tonne of CO2 removed than some other leading CDR approaches, like reforestation. To remove 1 million tonnes of CO2, a DAC plant would need 0.007-2 km2 for the plant and the energy resource, while capturing a similar amount of CO2 from forests would require1 an estimated 862 km2.

Tree restoration and direct air capture are key components of a carbon removal portfolio and will both be needed to achieve large-scale carbon removal.

What is the Water Usage Associated with Direct Air Capture?

Water usage associated with direct air capture also depends on the system type, as well as the ambient temperature and humidity. Both systems use water in hot, dry climates. However, in cool and humid conditions, they can both produce water.

For a liquid solvent DAC system, capturing one tonne of CO2 can require between 1 and 7 tonnes of water for plausible siting locations in the United States, which is comparable to the amounts of water required to produce a tonne of cement or steel. Water losses come mainly through evaporation, so the relative humidity and temperature of the plant’s location are the main determinants of the level of water loss, with higher losses in hot and dry environments.

Siting DAC in cooler and humid areas will minimize water use and in some cases the systems could also produce water. 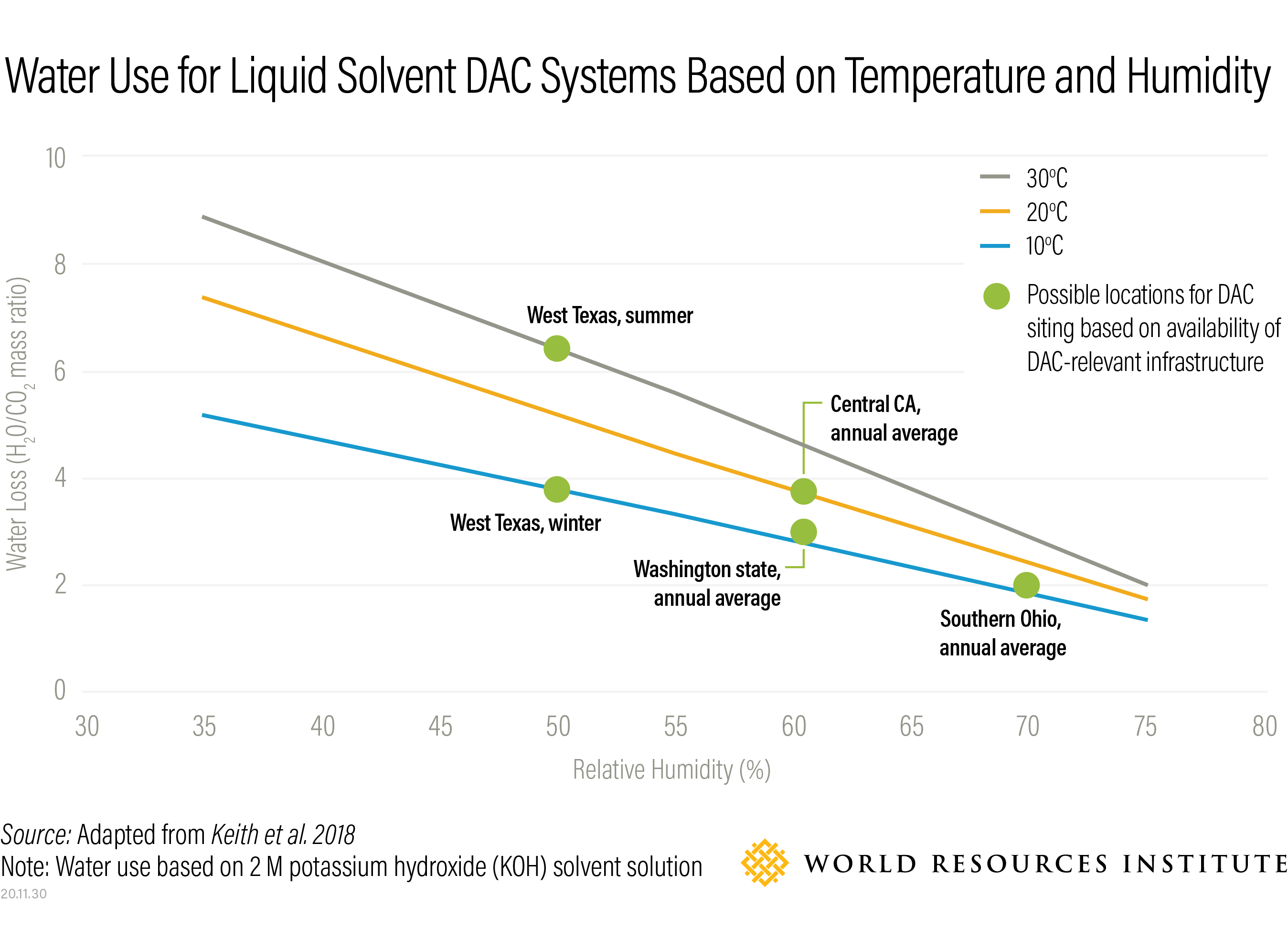 The solid sorbent DAC systems in development and production today vary widely in terms of water usage, depending on the sorbent regeneration method. A system that uses steam condensation to regenerate the sorbent may result in water losses to the environment. A typical plant employing this method is estimated to use 1.6 tonnes of water per tonne of CO2 captured. Other systems regenerate the sorbent using indirect heating, which allows for minimal water losses.

These indirect heating systems, such as Climeworks’ solid sorbent systems, are actually net water producers. They produce an estimated 0.8-2 tonnes of water per tonne of CO2 captured.

How Much Does Direct Air Capture Cost?

Despite the benefits and flexibility, direct air capture is more costly per tonne of CO2 captured compared to most mitigation approaches and most natural climate solutions. The range of costs for DAC vary between $250-$600 today depending on the technology choice, low-carbon energy source and the scale of their deployment. For context, most reforestation costs less than $50/tonne. Depending on the rate of deployment, which can accelerate through supportive policies and market development, costs for DAC could fall to around $150-$200 per tonne over the next 5-10 years.

Fundamentally, DAC is expensive because even though the concentration of carbon dioxide in the air is increasing, it is still very dilute and requires lots of energy to separate out. DAC is also expensive because there are not very many companies or projects yet — developing more projects will provide learning that could reduce costs.

Another reason is that markets for CO2 are limited and cannot provide enough revenue to offset the cost of capture. For example, the largest market for CO2 today is enhanced oil recovery (EOR), which involves injecting CO2 into oil fields to recover additional oil while locking the injected CO2 deep underground. As the largest market for CO2, DAC companies are incentivized to couple to EOR.

However, revenue from EOR is not consistent because it depends on the fluctuating price of oil. Additionally, using captured CO2 to produce fossil fuels, which release new CO2 into the atmosphere when burned, does not necessarily result in carbon removal and can also be seen as perpetuating dependence on fossil fuels. Other markets for CO2, like use in synthetic aggregate for concrete, are beginning to develop and could be an attractive alternative use for captured CO2.

Climate models make it increasingly clear that carbon dioxide removal will likely need to happen on a multi-billion-tonne scale by mid-century. Achieving this scale will require a portfolio of different approaches, which will reduce cost and the risk of other approaches failing to provide significant removal. Although direct air capture is one of the more flexible and scalable carbon removal approaches, the current lack of market opportunities and supportive policy measures disincentivizes deployment.

Investing in DAC now can make the costs lower in the future, which can prove critical as carbon dioxide removal becomes even more necessary. Carefully considering the land, energy and water requirements is essential to ensure that the deployment of DAC is successful, sustainable and valuable to overall carbon removal efforts.