Despite the name, organized crime in fisheries is not only about fishing. While illegal fishing is a serious problem across many regions of the world, organized crime in the fisheries sector extends much farther. It occurs globally throughout the entire fisheries value chain: on-shore, at-sea, at the coastal interface and in cyberspace. Regardless of where it occurs or how it happens, its harmful effects take a massive toll on human populations worldwide.

Organized crime in the fisheries sector can take various forms including drug and human trafficking, fraudulent catch documentation, money laundering and corruption — crimes that have potentially dire humanitarian implications. These crimes are profit-driven, diverting government revenue to the shadow blue economy at the expense of coastal communities and the pursuit of key sustainable development goals such as zero hunger, zero poverty, and peace, justice and strong institutions. These crimes can also directly endanger those who are exploited in their perpetration.

People in many coastal nations, particularly developing countries, depend on the fisheries sector for food and jobs. Large ocean nations are particularly vulnerable to disruptions in the sector, as recently exposed by the impacts of COVID-19. Criminal networks operating in the fisheries sector exacerbate the economic dislocation of local coastal communities, threaten already tenuous food security and divert much-needed state revenue. But there is hope: effectively tackling organized crime in fisheries will help foster a sustainable ocean economy which, in turn, will benefit communities reliant on the ocean and its resources.

Criminal networks operating in the fisheries sector often engage in a form of modern slavery: human trafficking for forced labor on fishing vessels. This shocking practice is getting more exposure in the media, including recent coverage of the North Korean “ghost ships” that regularly wash up on the shores of Japan. 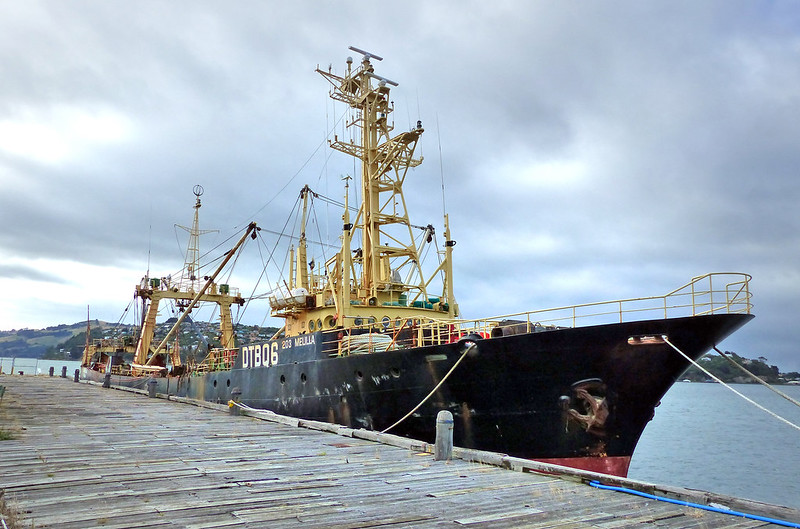 While it may look like any other, ships such as this one can be vessels for human trafficking that exploit vulnerable workers looking for economic opportunities. Photo by Bernard Spragg/Unsplash

Many crewmembers are indentured onboard distant water fishing vessels that rarely call at port. Instead, these vessels engage in transshipment, where catch, fuel, supplies and crew are transferred from one ship to another on the high seas. If the fishing vessels do dock at port, trafficking victims are frequently unable to communicate their plight to port authorities due to language differences, or for fear of being arrested as illegal immigrants due to the fact that ship captains usually hold their passports and identification documents. As a result, human trafficking victims often do not get the chance to report their inhumane working conditions or the human rights abuses they suffer.

Those who were rescued and shared their stories speak of violence, malnutrition, sleep deprivation and, in extreme cases, murder. Workers, driven to seek employment due to the lack of economic opportunities at home, are often tricked into working onboard vessels by unethical recruitment agencies. Many also become trapped in debt bondage, as their earnings are taken as payment for ‘debts’ incurred in obtaining the job. These debts could be for brokerage, recruitment company fees, documentation charges or food.

Drug and arms trafficking associated with the fisheries sector and its accompanying economy of violence also have devastating effects on vulnerable coastal communities. In the Caribbean, Venezuelan smugglers are using forcefully taken fishing vessels to trade illicit weapons and cocaine to Trinidad and Tobago for basic goods, such as nappies and cooking oil, that are in short supply. Involved transnational networks are known to cooperate with local criminal groups, contributing to a rise in national violent crime, bringing illicit drugs into coastal communities and fueling local criminal gang activities.

Recent reports also spotlight the long-standing “drugs-for-guns” trade via fishing vessels between Jamaica and Haiti. These trades involve exchanging local marijuana for illegal weapons and cocaine, fueling violence in Jamaica and contributing to a growing arsenal of illegal weapons in coastal communities and further inland.

Corruption is another common, yet rarely discussed form of organized crime that permeates the sector, ranging from bribery in return for ignoring illegal fishing to allocating fishing licences to companies or businesses with personal interests. Though its direct human costs are less visceral, the result is likewise devastating: money that could go towards much-needed job creation, education, health and basic services in developing coastal states is diverted to the pockets of a few white-collar criminals. Local communities feel the brunt of the impact as they lose out on access to national fish stocks, which are often vital to food security and livelihoods.

The overall economic cost of organized crime in the fisheries sector should raise alarms. Recent research shows that Africa alone will see annual economic losses between $7.6 billion and $13.9 billion, and income losses between $1.8 billion and $3.3 billion, due to catches redirecting from legitimate to illicit seafood trade.  A 2011-2014 estimate suggests that annual illegal and unreported marine fishing generates $15.5 billion to $36.4 billion in illicit profits each year. Additionally, tax revenue lost to tax crime in fisheries undermines the development benefits of the sector, particularly affecting the Global South.

Solutions to tackle this problem are within reach. A new paper commissioned by the High Level Panel for a Sustainable Ocean Economy, Organised Crime in the Fisheries Sector, highlights the need for political and legal cooperation at local, national and international levels. Political momentum to address transnational organized crime in fisheries is already growing, evidenced by the Copenhagen Declaration Against Organized Crime in the Global Fishing Industry. The Declaration fosters cooperation between governments through sharing knowledge and best practices to tackle fisheries crime.

There is, however, often a lack of capacity and resources to follow through on the ground. Processes that support developing countries in putting practical measures in place at national level are thus crucial. An example is the Blue Justice Initiative, which builds capacity to address transnational crime in the global fishing industry through close dialogue with the countries most affected.

Many countries are already making considerable progress. The paper highlights Indonesia as one such country, where law enforcement and policy reform relating to fisheries crime led to an increase of fish stocks from 7.31 million tons in 2014 to 12.54 tons in 2016.  According to the Indonesian Ministry of Finance, tax revenue from the fisheries sector improved in 2018 by 1.6 trillion rupiah ($113 million).

Organized crime in the fisheries sector is a major barrier to achieving a sustainable ocean economy. As the world faces the COVID-19 pandemic, now, more than ever, we need a healthy ocean and a fisheries sector free of crime to provide the key ecosystem services and economic benefits to those who need it. We are at a point in time when the vulnerable may be drawn into, or become the victim of, various forms of organized crime in the fisheries sector. Building momentum to address these crimes is critical to protect those who are at risk today and create a more sustainable future.

Emma Witbooi is the Director of PescaDOLUS International Fisheries Crime Research Network and a Research Associate at the Nelson Mandela University.