The Chuckegg Creek wildfire sparked in Alberta, Canada on May 12, 2019. Over the next three months, the blaze burned across 280,000 hectares, forcing more than 10,000 people to evacuate their homes. On the Global Forest Watch platform, bright red fire alerts were visible blossoming out across the landscape.

More fire alerts were detected in Alberta in 2019 than any other year in the past two decades. A massive spike in fire alerts registered in May and June — more than 17,000  in just two months — as the region battled drought. More than 883,000 hectares burned,  more than any year since 1981, when lightning strikes and fire-prone weather combined to create out-of-control fires. 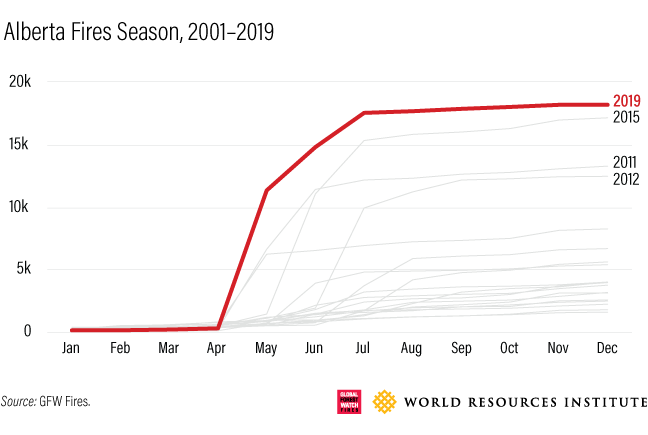 Alberta was not alone in its fiery year. Forests across the boreal region also experienced high numbers of fires in 2019. The Russian provinces of Irkutsk, Sakhalin and Krasnoyarsk, which contain a large portion of the country’s boreal and intact forests, all had their second- or third-highest number of fire alerts in 2019 compared to the last 20.

Although it may seem counterintuitive for places locked in ice and snow for six to eight months out of the year to burn, wildfires are a natural part of boreal forest ecology. The problem is we're starting to see signs of fires burning outside of their normal patterns, which poses a serious climate concern.

When Are Boreal Forest Fires Abnormal?

Often ignited by lightning strikes, fires in the boreal region release nutrients essential to forest growth into the soil. Some tree species are even dependent on the heat from fire to disperse their seeds, and the natural burn cycle helps maintain a healthy forest ecosystem. On average, wildfires burn anywhere between 5 to 20 million hectares of boreal forest each year. In Russia, low to moderately intense surface-level fires return every 53 years; for Canada, the return interval is roughly 180 years.

Because of the role wildfires play in boreal forests, and the limits of historical fire records, it can be hard to determine when boreal fires outside the natural cycle of burning and regrowth should be a cause for concern. One big fire season in this region doesn’t necessarily mean that forests have been irreparably damaged. Different forests are accustomed to different fire regimes, dictated by the build-up of fuel and weather fluctuations, and recurring small ground fires burning through the undergrowth won’t kill off a well-established stand of trees.

What does set off alarm bells, however, are larger and more intense fires occurring at a higher frequency than the natural regime. More frequent burning has the potential to unlock deeply buried “legacy carbon,” a thick layer of organic material on the boreal forest floor that doesn’t burn in ordinary fire seasons. Fires strip off protective soil layers above the legacy carbon, and, if there is not enough time before the next burn to build that protective layer back up, carbon that has been stored for centuries is released.  Frequent fires also inhibit regeneration. When certain tree species like black spruce burn at a young age, they haven’t had a chance to deposit a healthy bank of cones that release seeds during fire. This prevents the species’ recovery and allows other species to take advantage of the disturbance. Over time, this can permanently shift the forest ecosystem towards tundra or open woodlands.

Climate change has already contributed to more fire-prone conditions. Last year was the second-hottest year on record, and the boreal region is heating up much faster than the rest of the world. Both recorded and predicted temperature increases in Canada are twice the global average. Hotter temperatures melt permafrost and dry out peat soil, making it incredibly flammable. The increased likelihood of thunderstorms in a warmer world also increases lightning strikes that can spark a blaze.

The extent of the fires that do spark in the boreal is increasing. Burned area across Canada has doubled since the 1970s. The Siberian fires in July 2019 scorched through 7 million hectares in just two months. In Alaska, the number of major fire seasons (where more than 400,000 hectares are burned) has been increasing. Between 1990 and 2018, major fire seasons occurred every 2.5 years, compared to roughly every 5 years between 1950 and 1989. In 2019, the fires season began in early April, and while it typically ends before the start of August, the state Department of Natural Resources extended the official fire season to September 30.

Of course, wildfires naturally fluctuate in severity from year to year depending on the weather and available fuel; however, recent wildfire activity has exceeded the range of natural variability during the past 10,000 years, according to research conducted in Alaska’s Yukon Flats. This means that recent fire activity in this region of the boreal hasn’t been seen since at least the time of early human settlements. And researchers believe this increased activity will persist across the entire boreal in the years to come.

Boreal Forest Fires Are a Concern for Climate Change, Communities and Economies

In addition to the impact on climate and forests, intense fire seasons are hitting humans hard. In Siberia, 2019 fires sent clouds of smoke into the air over Russian towns hundreds of miles away from the burning. Large evacuations like the one ordered for the Chuckegg Creek fire are becoming more common as homes and human activities encroach further into forests. The economic costs of putting out fires are rising, too; Alaska spent more than $51 million on fire fighting in 2019.

Last year’s fires have hinted at what we could be seeing more often if climate change continues on its current course. Extreme fire seasons in the boreal could become the norm, locking in a dangerous feedback loop that contributes to further warming as carbon is released. Understanding the complexity of increasing fires in boreal forests will be crucial to combatting their contribution to climate change. The fire alarms are already ringing. If we fail to respond, we do so at our own risk.