There’s both good and bad news from the latest report tracking progress on Sustainable Development Goal (SDG) 7, a global goal to achieve universal access to energy by 2030. The good news: The number of people without electricity access globally has dropped, from 1.2 billion in 2010 to 840 million in 2017. The bad news: The report predicts that by 2030, there will still be about 650 million people without access to electricity, and 9 out of 10 of them will live in Sub-Saharan Africa.

This means that if business continues as usual, the realization of SDG 7 is already off-track. Electrifying hard-to-reach rural areas remains a challenge, but the difficulty of increasing electricity access rates in urban areas will be an equally significant barrier—especially in rapidly urbanizing countries, such as the nations of sub-Saharan Africa.

Sub-Saharan Africa is the fastest-urbanizing region in the world today. In the next 30 years, there will be more people living in the region’s urban areas than in its rural areas. Five of the most populous countries in the subregion (Nigeria, Ethiopia, the Democratic Republic of Congo (DRC), Tanzania and Kenya)—some of which have acute gaps in electricity access—have urbanization growth rates that exceed the sub-continental average. 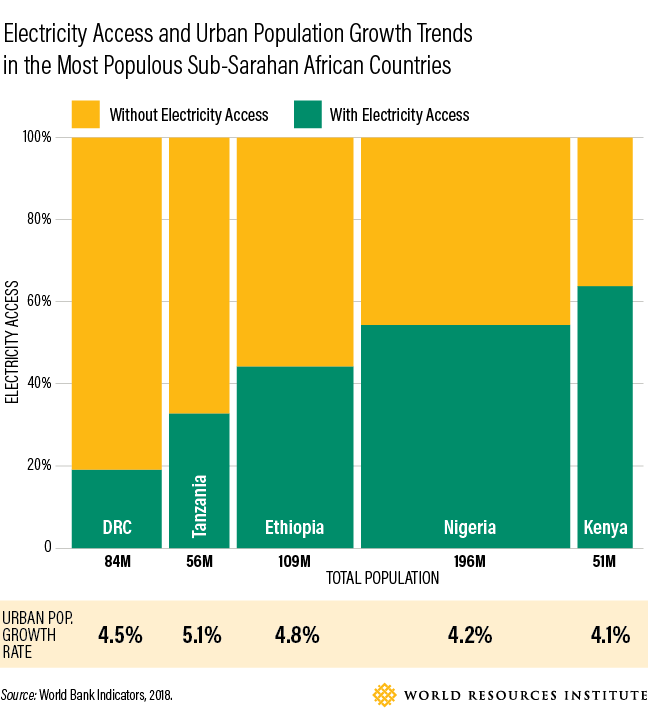 As we anticipate rapid growth in cities in sub-Saharan Africa, our universal electrification strategies must take this shift into account.

Focusing on electricity access in African cities is important because current urban electrification rates may not be telling the full story. Even though urban electrification rates in sub-Saharan Africa are, on average, much higher than those in rural areas, they may not reflect the reality on the ground. Currently, there are more than 100 million urban Africans who live right under a grid, but lack an electricity connection due to prohibitively high connection costs. In sub-Saharan Africa, 55% of all urban dwellers live in slum-like conditions; many of them lack electricity connections or may be connected illegally. Other city residents have electricity connections, but are unable to reap the benefits due to frequent outages and voltage fluctuations. A true picture of electricity access in urban areas needs to take attributes such as affordability, connection legality, reliability, supply quality, health and safety into account.

Secondly, Africa’s urbanization poses a unique challenge to electrification because it is generally harder to raise electricity access in urban areas than in rural areas. In addition to this, opportunities to create wealth and employment and promote social development in African cities have been limited because economic growth has not kept pace with rapid population growth. As more people move to cities and more people are born there, poverty is redistributed in slums and informal settlements which often fall outside of formal service-delivery territories. Bringing electricity to people caught in this complex urbanization dynamic will be important for achieving universal access for all.

Here are three concepts to keep in mind for improving electricity access across a rapidly urbanizing sub-Saharan Africa:

1. We need a better understanding of urban electricity access.

Emerging analytical frameworks such as the Multi-tier Framework (MTF), geospatial tools and remote monitoring techniques now offer opportunities to reassess the actual scale and scope of the electricity access gap in urban areas in sub-Saharan Africa. The MTF provides a comprehensive basis for building in elements of affordability, reliability, quality of supply, legality, health and safety to capture the actual state of urban electrification in the region.  Applications of the framework in sub-Saharan Africa, for example, show that about 60% of urban households in Ethiopia and 77% in Rwanda experience 4 to 14 power outages per week. Techniques that enable remote monitoring of electricity quality and reliability also offer opportunities to build independent data and analysis of urban electricity access. Sub-Saharan African governments and the international development community can use these innovative tools to build a comprehensive understanding of the urban electricity access challenge.

2. The utility agenda must not be forgotten.

The rise of private sector-driven electricity options, such as solar lamps and solar home systems, has transformed traditional views of electrification. For many communities without connections to the grid, these solutions have brought hope. However, public utilities will remain crucial actors in bringing universal access to sub-Saharan Africa. Utilities will still be needed to reach very poor areas of the market that are not natural candidates for private sector providers. As successful rural electrification stories in Africa prove, utilities with a stable urban customer base may be able to finance connections for the rural poor by subsidizing rural connections with urban revenues.

But policy frameworks for grid electrification continue to lag behind in most countries with severe electricity access deficits. Since 2010, policies and regulations for mini-grids and standalone systems have improved much faster than those for grid electrification. A more balanced approach will help. We also need rigorous and sustained efforts to reform sub-Saharan Africa utilities. Financially healthy utilities will be better-positioned to invest in new connections and improved service delivery. The time is ripe to focus on working with national governments to reform utilities to improve operational efficiency, financial viability, transparency and monitoring.

3. We must focus on people and poverty.

As societies become more mobile and urban centers grow, energy poverty will increasingly transcend neat rural-urban divides. We can bridge the gaps in sub-Saharan Africa by focusing on the actual people who lack connections, those who are unable to pay for electricity services despite being connected, those with illegal connections, and those with unreliable or insufficient supply. A focus on lifting people out of poverty will encourage integrated electrification agendas that will enhance the abilities of people and communities to prosper. Without this intention, SDG7 and many other development goals that rely on the availability of electricity will remain a distant reality.