Did you know that air quality is a major contributor to global warming? Or that poor air quality can reduce sunlight, disrupting rainfall patterns, depressing crop yields and diminishing solar energy output? Did you know air pollution is the biggest environmental cause of death in the world today?

We all breathe air. But the interrelationship of air quality with other environmental and economic concerns is not as well-known or well-understood as it might be. There are many problems with bad air—and cleaning up the atmosphere is both urgent and tremendously difficult.

In a new podcast, WRI’s Vice President for Communications Lawrence MacDonald speaks with Jessica Seddon, director for integrated urban strategy at the WRI Ross Center for Sustainable Cities. Beginning with her time as an academic in San Diego, their conversation traverses continents to cover her decade in India before arriving at WRI's air quality work.

“Very few people know that air pollution is responsible for double-digit estimated losses in crop yields… It can cut renewable energy yields by a third. And air pollution has a strong warming impact,” Seddon explains.

It’s not that we don’t know how to reduce air pollution emissions. We can avoid transport emissions by building more densely, planning cities that reduce trips by private car. We can shift energy production away from coal. We can limit deforestation. It’s that achieving any of these goals entails overcoming complex political and economic hurdles. Seddon, whose academic training is in political economy and game theory, did her dissertation on Indian infrastructure policy and regulation. “We need to move from demanding clean air to demanding actions that produce clean air when and where we want it,” she explains.

Their conversation continues with a five-step cycle that Seddon and her colleagues say describes how we can accelerate local air quality progress into global change. 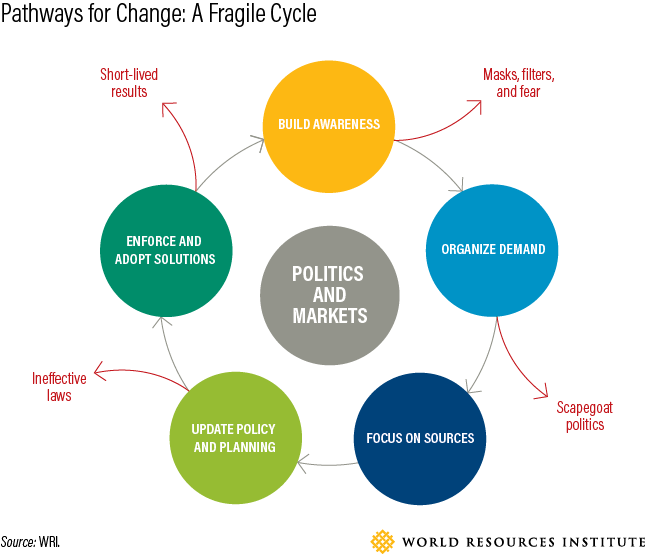 “We could see substantially better air in a decade—if we are able to create a stronger link between recognition of the deeper transition required and the political economy of that transition—and being able to match the evidence and science we are gathering in a much more targeted way to the political cycle,” Seddon explained. “What’s holding us back is the knowledge of how knowing what to do fits into the particular political economy of different places and regions. If we can make the match between what we know and how we act as a society more effectively, we can see much cleaner air.”