Home > Blog > When It Comes to Climate and Security, “We’re All in the Same Canoe”
Comments
|
Add Comment
|
Print
Tweet

Federica Mogherini, head of the European Union’s External Action Service, put it plainly at the beginning of a high level conference on climate and security in Brussels: climate change isn’t just “for those interested in flowers.” It was a neat way of making the point that environmental issues are as closely intertwined with security and defense as they are with seemingly softer concerns like development and humanitarian aid. Several hundred people in Brussels’ Egmont Palace on June 22 agreed, among them foreign ministers, prime ministers, the deputy director general of NATO and Andrew Steer, WRI president and CEO.

Recognizing and highlighting the links between climate and security requires data and research. “We need to get our facts right,” noted Swedish Minister of Foreign Affairs Margot Wallstrom. “We need a robust reporting system, from the field, on climate, water and security threats.”

This is already happening. In between round table discussions, Steer presented some of those facts:

But all this data is nothing without action. “If we knew then what we know now,” asked Steer, “what would we have done with Syria?” New research on Syria suggests that climate change made the drought that preceded the war in Syria two or three times more likely. “We should not have been surprised by Syria’s fragility.” If we had known about the destabilizing stresses on the Nigerian environment, he asked, would we (could we) have prevented the emergence of Boko Haram? 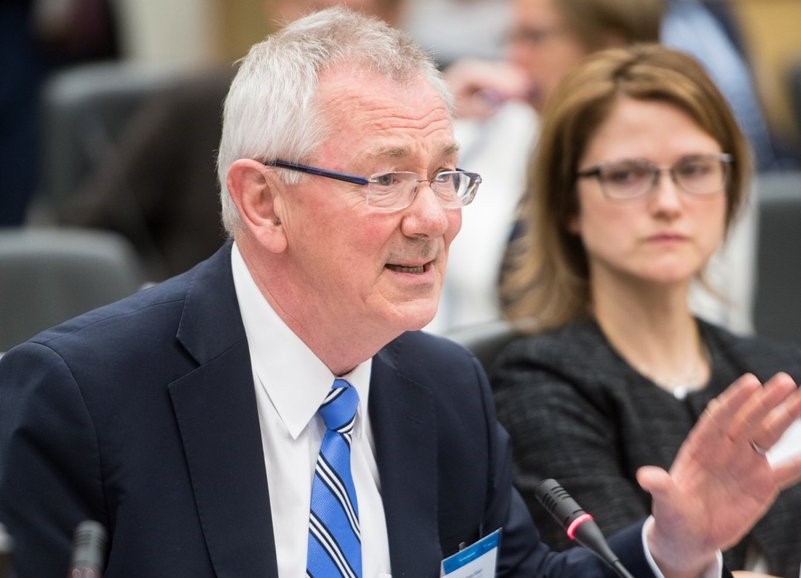 Andrew Steer at the high-level event. Photo by EEAS

Others are using such research to spur action, Steer said: “Top CEOs get this.”A slide that showed the main concerns of leading CEOs indicated that they worried far more about extreme weather events than more obvious risks like an economic slowdown, and were acting on those concerns. For those concerned with security – including governments and multilateral organizations like NATO – it is also time to act, according to speakers at the conference. “You can wait for something to happen,” said Mogherini, “or you can roll up your sleeves.”

What could such action entail? The urgent need to shift to a low-carbon economy is an obvious component. There is also an urgent need to offer young men in marginal areas something other than a gun and $300, Wallstrom advised. Climate change is especially destructive for agricultural livelihoods, and this could be combatted through investment in climate adaptation and mitigation.

The impact of climate change on security will not just be felt in places like Somalia and Bangladesh. Rose Gottermoeller of NATO spoke about having to recognize and respond to a warming world. For instance, as polar ice retreats and makes the Arctic more accessible to civilian shipping, it is important to have the right tools in place to respond to crises and ensure that those ships remain protected. Climate impacts will be felt in unexpected ways – another reason why research and data will be such an important part of engaging with the challenge.

Failure to act on this data and research could have profound impacts. The conference’s message was that these impacts would not just be confined to tropical islands and places far away from the more comfortable and richer parts of Asia, Europe and America. Climate change could ignite wars, fuel instability, drive people to extremism and terrorism and cause millions to flee their homes and migrate in search of better lives. The security dimension of climate change confirms that it is a concern for us all. As the Prime Minister Frank Bainimarama of Fiji told the conference, “We are all in the same canoe.”