Most of India's thermal power stations—everything from coal to natural gas to nuclear plants—use freshwater for cooling. New WRI research finds that growing water scarcity forced 14 of the country's 20 largest thermal utilities to shut down at least once between 2013-2016, causing $1.4 billion in revenue losses and potentially hindering returns to their investors.

In fact, water shortages are the top environmental cause of power plant outages in India and the fifth-largest reason for forced outages overall, following equipment failures, reserve shutdowns (RSD), fuel outages and uneconomical operations. India forfeited 14 terawatt-hours (TWh) of electricity in 2016 due to water shortages alone, enough energy to power neighboring Sri Lanka for a year. India's electricity generation grew by 204 TWh from 2013 and 2016 – but lost generation from water shortages cut into this growth by almost 15 percent.

Which of India's Utilities Are Most at Risk from Water Shortages? 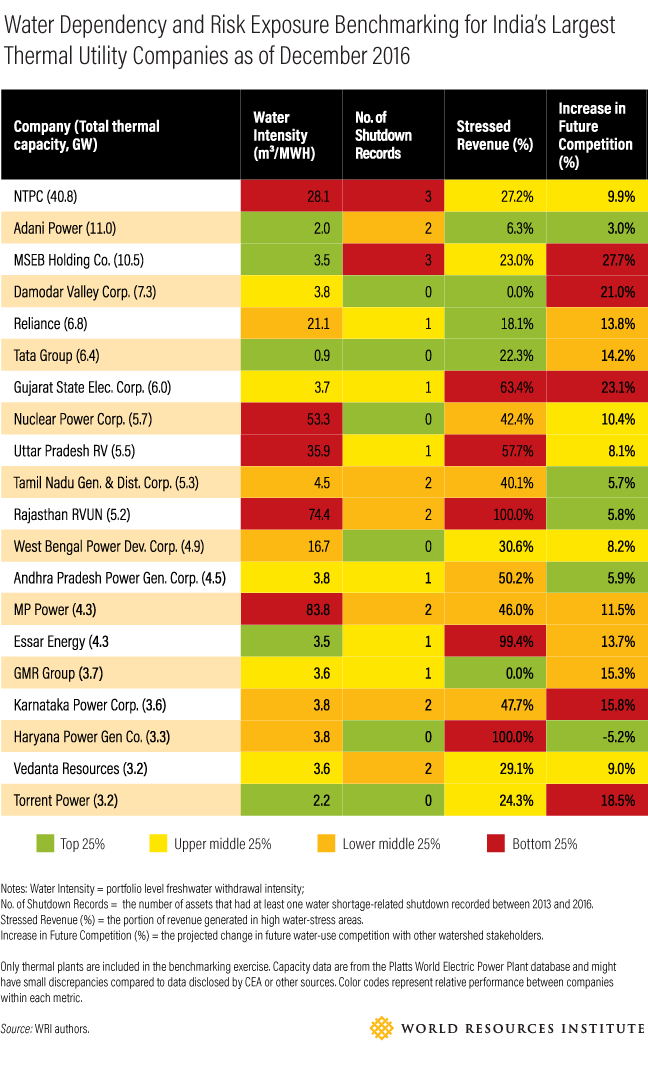 Roughly 40 percent of India's thermal power plants are located in highly water-stressed areas, but this isn't the only risk factor. We analyzed the 20 largest utilities' generating capacities against four water-related metrics: the amount of water they withdraw per unit of generation, how many water-induced shutdowns they experienced from 2013 to 2016, the amount of revenue generated in highly water-stressed areas, and projected change in water use competition stemming from increasing demands and diminished supply. 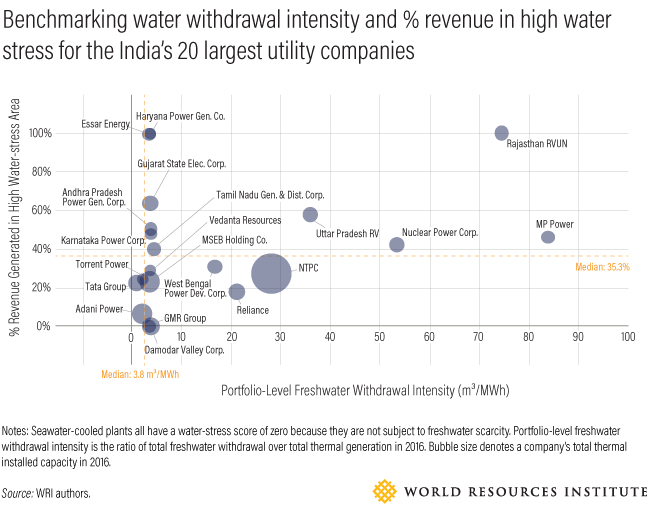 Most companies located in highly stressed areas have compensated through a lower water intensity,taking water-saving steps such as using seawater instead of freshwater for cooling, or investing in more efficient technologies. But there are worrying outliers. Uttar Pradesh RV, Rajasthan RVUN, Nuclear Power Corp. and MP Power all have high exposure to stress and relatively high water intensity, leaving them at risk of outages during water shortages.

The freshwater intensity levels across companies also vary greatly based on water source and cooling type. For example, across their portfolio, MP Power needs roughly 84 cubic meters of freshwater to generate 1 MWh of electricity, while Tata needs less than 1 cubic meter.

How Can Utility Companies and Investors Take Action to Curb Water Risks?

Reliance on scarce water resources is risky business for thermal power utility companies, and it's only poised to worsen: Projections show that 70 percent of India's power plants will face high water stress by 2030 due to climate change and increasing water demand. This past summer, the Task Force on Climate-related Financial Disclosures (TCFD), an industry-led initiative that aims to mainstream reporting on climate-related risks, highlighted how physical risks resulting from climate change could affect water supplies, creating a "potentially important exposure" for electric utilities.

Conducting a portfolio-level assessment on water dependency and risk exposure is key for utility companies and their investors to understand the risks they face, prioritize resources and develop effective mitigation strategies. This also means reassessing watershed hydrology at the individual power plant level, including changing drought probabilities.

Our experience conducting this analysis affirms the need for better disclosure on climate-related risks. Instead of consulting a public database or company filings, WRI researchers had to examine each Indian power plant from above using Google Earth satellite images, estimating how much water they use based on cooling type and national average performance. Not only is this a time-intensive exercise that's unrealistic for most investors to replicate, it fails to present a precise picture for individual plants. Better data and disclosure of climate and water risks by companies would help investors make more informed decisions and better engage companies in their portfolio.

Both public and private sector investors should assess their investment portfolios' exposure to water risks and identify highly exposed companies. Armed with that analysis, investors can engage at-risk companies to identify operation changes, energy portfolio options that stress renewables, and other investments that can reduce exposure to water risks. This can help investors and companies boost their bottom lines, ensure a reliable energy grid and create a more water-secure future.

In the coming year, WRI's Aqueduct and Sustainable Investing Initiative teams plan to collaborate on research and data tools that will further explore the water-energy risks investors face.