International climate change negotiations can be hard to follow. Scientific language like "radiative forcing" and "sulfur dioxide" sit alongside acronyms like UNFCCC, SDG and CMA. The Paris Agreement on climate change practically spawned its own language, with new terms like "facilitative dialogue" and "Global Stocktake."

For the second year in a row, we're bringing you a cheat sheet to decrypting the code-speak at the annual UN climate meetings, held this year in Bonn, Germany. The terms might be unknown, but the debates concern all of us.

COP: The Conference of the Parties, or the annual gathering of the 197 Parties that have joined the UN Framework Convention on Climate Change (UNFCCC), an international environmental treaty adopted in 1992 to stabilize global greenhouse gas emissions. This year's COP in Bonn is the 23rd, hence COP23.

Presidency: Fiji is the President of this year's COP. The presidency rotates between five regional groups and involves political leadership and chairing meetings of the COP.

Party : A country or regional group (like the EU) that has joined a particular international agreement, such as the UNFCCC or the Paris Agreement.

Paris Agreement: An international climate change agreement under the UNFCCC adopted by 196 Parties at COP21 in Paris in 2015. It entered into force on November 4, 2016. This year's COP is all about how Parties will implement the goals of this Agreement.

Long-term goals: The global targets established by the Paris Agreement. They include limiting global temperature rise to well below 2 degrees C (3.6 degrees F) and pursuing efforts to limit it to 1.5 degrees C (2.7 degrees F) above pre-industrial levels, and achieving net-zero emissions (where greenhouse gas emissions do not exceed what the world's carbon sinks can absorb) in the second half of this century. All Parties to the Paris Agreement have agreed to take action in their own countries to collectively achieve these long-term goals.

READ ON: Understanding the "Emissions Gap" in 5 Charts

NDC: A nationally determined contribution. Refers to the 165 national climate plans countries have submitted to the UNFCCC to date (they are from 192 countries since the EU submitted one for all of its 28 member states). The NDCs describe commitments to emissions-reduction targets and policies, adaptation plans and other climate action goals.

Withdrawal : Withdrawing from the Paris Agreement is a lengthy process. A Party is only eligible to submit withdrawal papers three years after the Agreement enters into force for that Party, and withdrawal then takes effect one year from receipt of those papers. The United States is the only Party so far that has announced plans to withdraw, but this withdrawal process cannot be initiated for three years (November 4, 2019) and U.S. remains a Party to the Paris Agreement until one year after that time. U.S. negotiators are participating in COP23. 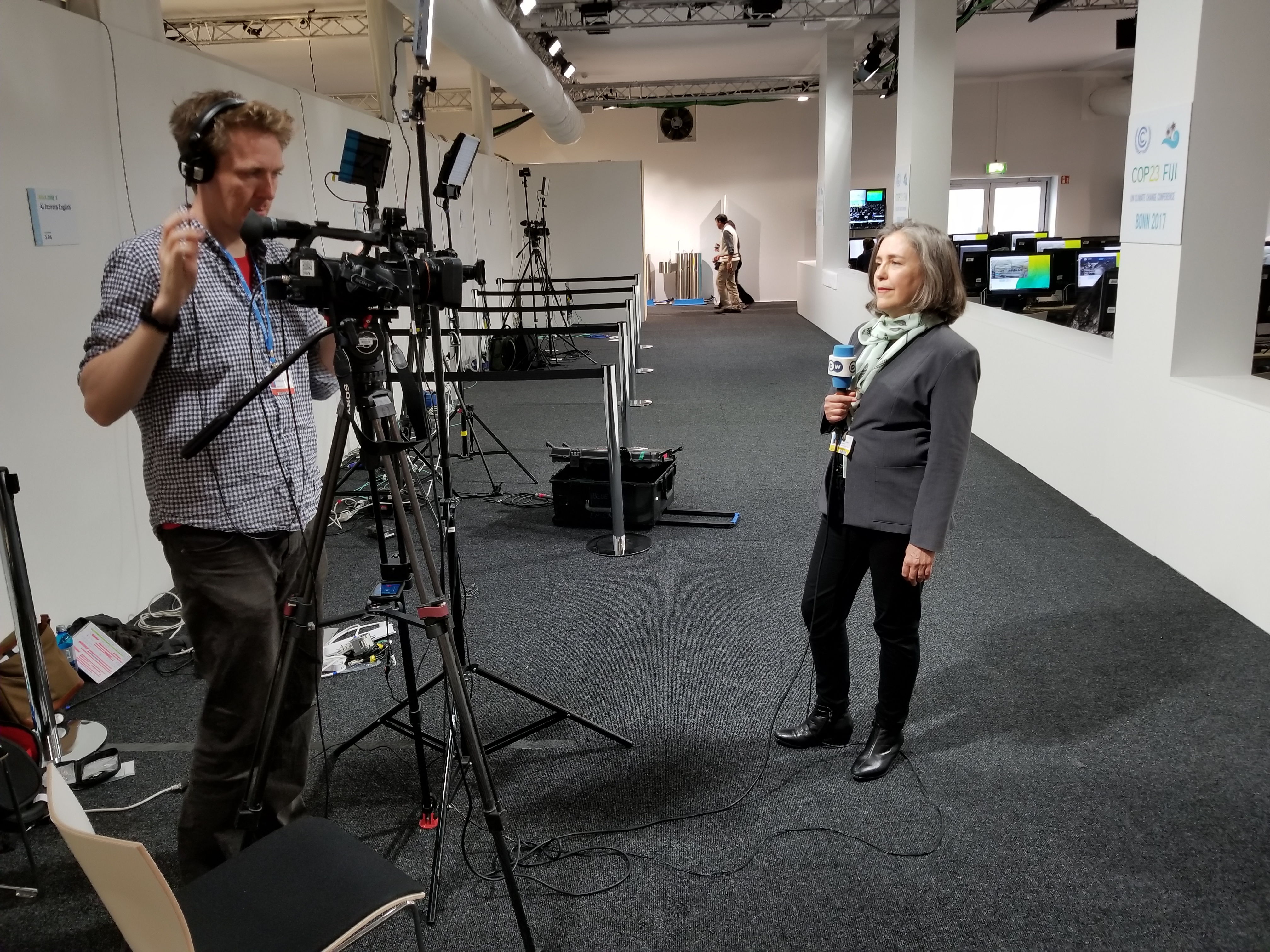 WRI's Paula Caballero getting ready to speak to Deutsche Welle.

Modalities, Procedures and Guidelines (MPGs): The guidelines that need to be developed under the Articles of the Paris Agreement to provide Parties with instructions for achieving the Paris Agreement's purpose and long-term goals. Parties will negotiate these MPGs in addition to other key aspects of the Paris work program at COP23 and over the next year; the CMA will finalize them at COP24 in 2018. The MPGs are also commonly referred to as the Paris rulebook, implementation guidelines or operating system .

UNFCCC bodies: In addition to the COP and CMA, a number of other bodies under the UNFCCC will play key roles in developing various aspects of the MPGs or Paris work program. These are the APA (Ad Hoc Working Group on the Paris Agreement), SBI (Subsidiary Body for Implementation) and SBSTA (Subsidiary Body for Technological and Scientific Advice)

READ ON: How the Paris Agreement Will Keep Accelerating Climate Action

Enhanced NDC: All Parties have the opportunity to submit new or updated NDCs by 2020. This opportunity should be viewed in the context of the principles of enhancement and progression under the Paris Agreement.

READ ON: 4 Reasons for Countries to Enhance Their NDCs by 2020

Global Stocktake: The collective moment to take stock of progress towards achieving the long-term goals of the Paris Agreement. It will occur every five years, beginning in 2023, and will inform the submission of new NDCs.

READ ON: INSIDER: Designing the Global Stocktake Under the Paris Agreement

Talanoa Dialogue, or 2018 Facilitative Dialogue: The first moment when countries will conduct a stocktaking exercise. COP23 will see the formal launch of this Dialogue, with technical discussions happening throughout the next year, culminating in a ministerial-level event at COP24 in 2018.

"Talanoa" refers to a process of inclusive dialogue through storytelling, traditional to Fiji, that the Fiji Presidency is expected to use to facilitate consensus.

Marrakech Partnership for Global Climate Action: The official platform for non-state actors to announce their climate initiatives. This platform, previously known as the Lima-Paris Action Agenda, is hosting a five-day calendar of special events in Bonn.

Climate Champions: Each year, two climate champions – one appointed by the previous COP President and one by the current President – focus on action by non-state actors. A new climate champion, representing the Presidency of the following year's COP, replaces an existing one every year.

Loss and damage : Severe climate change impacts that cannot be adapted to, such as the impacts of catastrophic weather events or loss of coastal areas to sea-level rise. The Warsaw International Mechanism for Loss and Damage was established at COP19 in 2013, and aims to " address loss and damage associated with impacts of climate change, including extreme events and slow onset events in developing countries particularly vulnerable to the adverse effects of climate change."

READ ON: At COP23, Prioritizing Adaptation and Addressing Loss and Damage

Adaptation Fund: An international fund created in 2001, under the Kyoto Protocol, to support adaptation projects in developing countries. It began approving projects in 2009, and pioneered the concept of direct access. At COP 22 in Marrakech, countries agreed that the Fund should serve the Paris Agreement, following decisions that address its governance and institutional arrangements, safeguards, and operating modalities. Its final relationship to the Paris Agreement is not yet determined; this is a key area of discussion for COP 23.

$100 Billion Goal : A target agreed to in 2009 at COP15 in Copenhagen, where developed countries committed to mobilize $100 billion a year of finance by 2020 from a variety of sources, including public and private finance, to help developing nations mitigate and adapt to climate change. Countries at COP23 will be looking for clarity on progress towards the goal and reassurance that it will be met.

The $100 Billion Roadmap refers to the developed countries' plan, requested at COP21 in Paris, and released in 2016, for how they will increase the level of finance to meet the goal.

Green Climate Fund : An international fund created in 2010 to support adaptation and mitigation projects in developing countries. An initial $10.3 billion was pledged to the GCF from over 40 countries, and the Fund began approving projects in 2015. Money developed countries provide to the GCF is one, but not the only, source of funding that counts towards the $100 billion goal. At each of its meetings, the COP provides guidance to the GCF.

Macron / One Planet Summit: A summit convened by French President Emmanuel Macron in Paris on December 12, 2017, two years after the Paris Agreement on climate change was finalized. The summit will focus on financing climate action and aligning financial flows in order to reach the objectives of the Paris Agreement.