Decentralized renewables have the potential to provide electricity to millions of people without power. In Tanzania, for example, the government estimates about half the rural population may be more cost-effectively served by decentralized options than by centralized grid expansion. A growing community of energy access entrepreneurs are trying to bring off-grid products to market in Tanzania, India and other countries with large populations without electricity.

But like every other business, clean energy enterprises must find customers ready to pay for the product. Two years ago, WRI and New Ventures launched maps to help entrepreneurs find off-grid communities that could afford energy services. Today, WRI is launching an update of its interactive Tanzania maps, including new data on mini-grids and streamlined navigation. 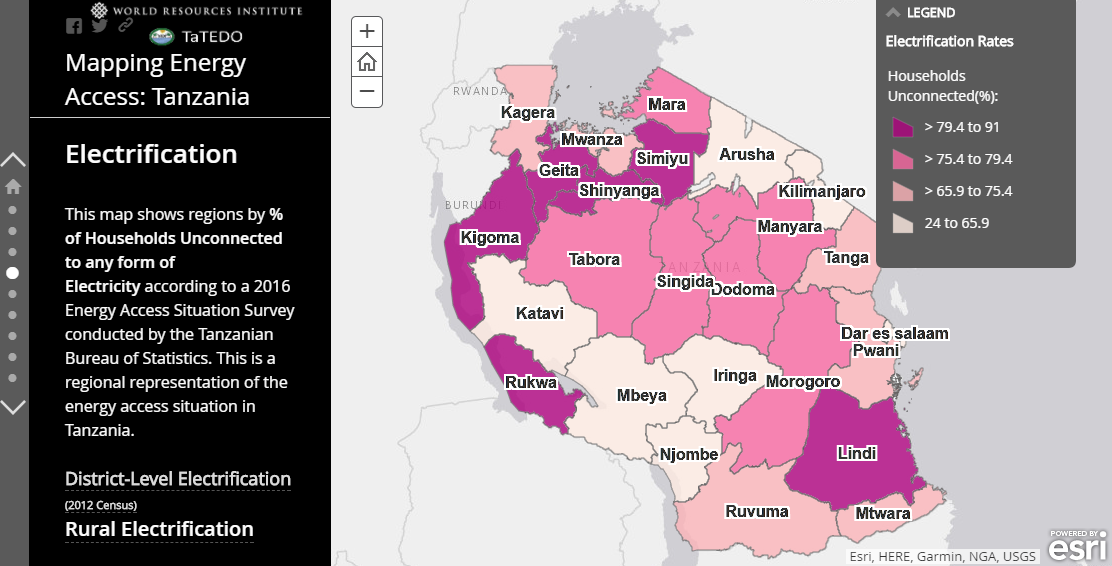 Energy entrepreneurs in Tanzania and India say data on markets is crucial to making the decision of when to go where. Mapping tools can help entrepreneurs meet the potential of clean electricity.

A former Indian Army officer, Col. Vijay Bhaskar now leads India operations for Mlinda, a company that sets up mini-grids that combine solar photovoltaic-diesel and biomass technology and serve 24/7 power to households and village businesses. Mlinda’s early strategy, “chasing every house,” spread staff too thin. The firm needed to focus its expansion on areas where potential customers were densely located.

In 2016, after an analysis of electrification data, Mlinda decided to concentrate on one district – Gumla – in the state of Jharkhand. Mlinda set up its nine mini-grids in a tight, 25-kilometer radius from the main town. Mlinda helped these communities build businesses that could sustain demand for electricity, a critical strategy for expanding access. Mlinda’s mini-grids not only replaced fossil fuel use in existing agricultural pumps, agri-processing and poultry units, but also powered new facilities such as cold storage and oil pressing units.

Mlinda’s concentrated approach has attracted new customers. Word of mouth is powerful marketing in these parts of the world.  Seeing the successes in villages near Gumla, local bodies in 31 neighboring villages have passed a written resolution inviting Mlinda to set up local mini-grids.

Saad Latif heads expansion at Mobisol, a clean energy company that sells pay-as-you-go (PAYG) solar home systems in Tanzania. Latif explains that in areas where few residents have electricity, marketing is needed to sell potential customers on Mobisol’s technology and finance model. Likewise, customer service is vital to grow the business because prospective customers look at the experience of existing customers before making their purchase decisions. Like Mlinda, Mobisol has needed to concentrate limited resources for marketing, sales and service.

Mobisol has used data to shape an expansion strategy that prioritizes defined geographies. Mobisol started in the relatively prosperous Arusha and Kilimanjaro regions before moving to the lake region of Mwanza. The next target region was Mbeya, which WRI and New Ventures’ maps identified as a potential target based on criteria of household electricity availability, asset ownership and mobile agent penetration. The company needed to tailor its product offering as it expanded southwards. Customer incomes, supported by the tea industry, vary from season to season. The warmer climate meant customers wanted products that could power a fan.

Market data can help entrepreneurs like Col. Bhaskar and Latif understand where their customers are likely to be located and where there is a concentration of demand. Entrepreneurs can explore our updated Tanzania maps, which combine household electrification and socio-economic data with GIS locations of existing and planned mini-grids and transmission lines. Other tools, such as the Open Source Spacial Electrification Tool (OnSSET) can help calculate the least-cost electrification option for individual districts.

Growth of energy businesses can put us closer to the goal of universal access to energy by 2030. But planners could also take advantage of market data to dedicate public resources to the least developed regions. If coordinated, a public-private approach can make faster progress to bring light to districts currently in darkness.