The world’s climate negotiators have a clear deadline: In 2018, they must reach agreement on the implementation guidelines – also known as the Rulebook – for the Paris Agreement.

These guidelines are essential to building trust among stakeholders and ensuring that implementation of the Agreement is effective and fair, while sending strong market signals to spur low-carbon innovation and investment by the private sector and action by states, cities and other governments.

In May, climate negotiators produced a skeleton outline of the Rulebook and agreed to add additional negotiating time on it before COP23 in November. Meanwhile, they provided an opportunity for submissions to help parties to the Agreement draft a more comprehensive text.

To move ahead effectively, negotiators need to understand and map the linkages between the interrelated elements of the Paris Agreement to developing a coherent, mutually reinforcing set of guidelines. They will also require a pragmatic approach that acknowledges countries’ differing stages of development while continuing to foster commitments to improve transparency over time

Here’s what needs to be done between now and November to have a complete Rulebook ready for COP24 in 2018. 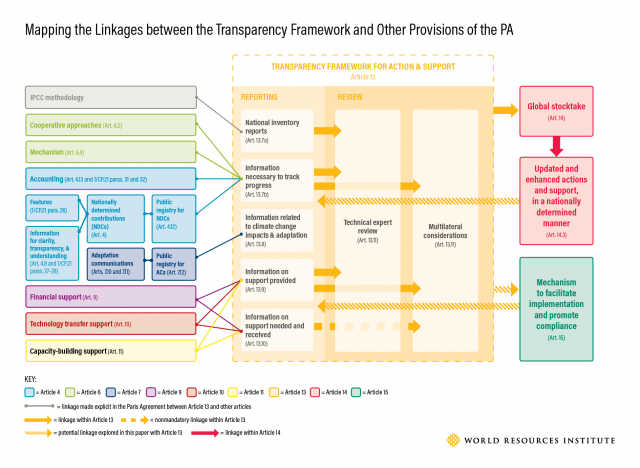 In Bonn, countries made headway on some key issues for their future Nationally Determined Contributions (NDCs).

However, negotiators dealing with the mitigation element of NDCS still need to find common ground on:

These issues may be easier to address if countries know why the information is requested, including to provide sufficient information for aggregation, enable comparability, inform the global stocktake, clarify the NDC to enable mutual understanding or guide Parties in communicating their NDCs.

On adaptation, negotiators need to help countries determine whether to communicate their progress through National Communications, NDCs or National Adaptation Plans. They also should determine whether these communications will be strictly forward-looking (reporting on plans, priorities and needs, for example) or whether they will also review past actions, outcomes and support.

How adaptation communications relates to the enhanced transparency framework has yet to be clarified. Since there is potential overlap, negotiators will need to work jointly on these two strands to chart a reasonable path forward to streamline the process to avoid unduly burdening developing countries.

2. Reporting and Review Under the Enhanced Transparency Framework

This is the negotiating track that saw more progress, with the most detailed draft outline of the guidelines. However, how to build in flexibility for countries with different capacities remains a key issue for the transparency framework. Options include whether the information to be reported and reviewed should be considered differently for different types of countries; what their capabilities are (resulting in different tiers of stringency); the types of NDCs submitted and specific commitments in them; or what is mandatory and what is voluntary in different requirements.

In addition to flexibility, negotiators need to build a framework that is enhanced compared to the existing regime. Unpacking how this enhancement will happen – how long it will take, what rules and procedures will stay and which will be superseded, and generally what will be kept and what left behind – might be the key to building consensus.

While divergence remains on the definition of climate finance, negotiators at Bonn identified key principles and issues that need to be addressed, and these were compiled into informal notes on accounting and reporting to guide talks in November. A closed roundtable discussion also identified the forward-looking financial information that developed countries will be required to report every two years. A summary report based on these discussions will be ready by COP23.

Discussions on the two-phase review process turn on three main issues: 1) What should the outputs be? 2) How should such an intensive process be handled? 3) How should the guidance for assessment reviewers be given in a consistent and helpful manner?

The Global Stocktake – a core element of the Agreement’s ambition mechanism – requires both creative thinking and careful design. Between now and COP23, countries should consider how best to structure the technical and political components into streams or working groups so that all the elements of the Paris Agreement are adequately reflected and assessed. Negotiators also need to:

The core elements of the Global Stocktake need to be durable, yet flexible enough to adapt to future needs and keep the process relevant over time.

After constructive discussions in Bonn on the mechanism to facilitate implementation and promote compliance, negotiators need to make sure that the expert committee established in Paris encourages the highest possible participation and ensures effective implementation of the Agreement.

Negotiators certainly have a lot think about. As reflected in the APA co-chairs’ conclusions, the next major milestones will be the submissions by parties by September and the roundtable negotiations ahead of COP23 that Bonn negotiators agreed to hold. But negotiators need to remember that for the Paris Agreement to be implemented fairly, effectively and at the pace and scale required, all actors – not just governments – must be involved. The determination of wider stakeholders and governments around the world to move forward has become evident in recent weeks and months. The Paris rulebook can help guide that forward movement.