We are all interested in seeing value for money – whether we are individuals, businesses or government. Now, a new report makes plain the very sound business case for reducing food loss and waste. The figures will turn the head of even the hardest-nosed budget director.

Businesses Save Money by Reducing Food Loss and Waste

After evaluating cost and benefit data for 1,200 business sites across 700 companies in 17 countries, researchers from WRI and WRAP found that nearly every company had a positive return on their investments to curb food loss and waste in operations. Half realized a 14-fold or greater return. Simply put, for every $1 invested in things like training staff to lose less food in production, $14 or more were saved. 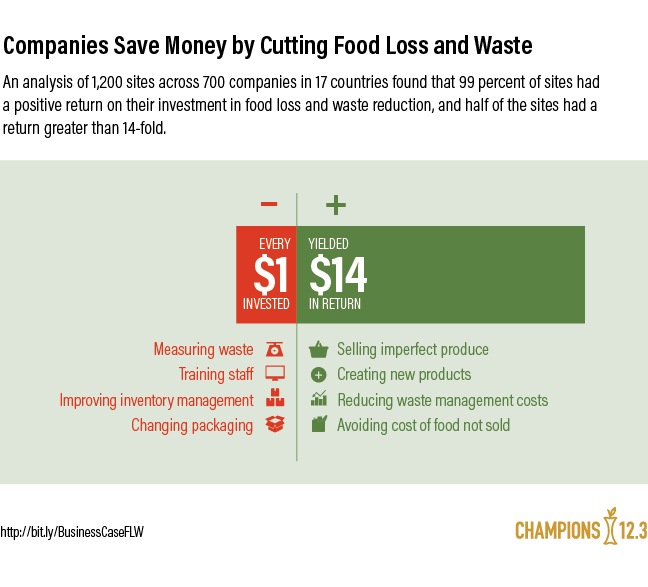 One company, for example, looked at how much was being lost or wasted at one of its UK sites, finding 7 percent of the weight of ingredients was residue left in containers being pulled from production. By implementing a simple process to capture and keep that residue, rather than let it go to waste, the company realized an astounding 318:1 return.

Another company operating in workplace restaurants was able to identify hotspots of waste from out-of-date food, overproduction and consumers throwing out uneaten food. By investing in better meal forecasting, training staff and engaging their customers, the company realized a 5:1 return.

Economic Benefits for Cities and Countries

The incredible returns aren’t limited to the private sector, either. The report looked at figures from the United Kingdom, the only nation we found with available full cost-benefit data. From 2007 to 2012, a nationwide initiative helped curb household food waste by 21 percent. For every £1 ($1.22) the government, companies and the nonprofit organization WRAP invested in the successful effort, households and local authorities saved £250 ($305), a 250:1 return on investment.

That level of savings isn’t a one-off. In 2012, six London boroughs started a local-level effort to mirror the national initiative. After just six months, participating households were wasting 15 percent less food, which translated to spending less money on food they would have typically purchased and thrown out. In total, for every £1 ($1.22) the boroughs invested to cut household food waste, consumers saved £84 ($102) and the boroughs £8 ($10) from avoided food waste disposal costs. Just think of what that added money means for families and cities! 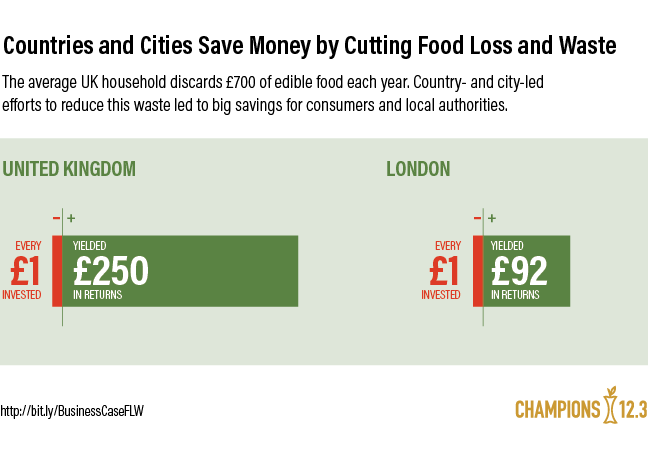 The Benefits Extend Beyond Dollars and Cents

The report, aptly named The Business Case for Reducing Food Loss and Waste, was released on behalf of Champions 12.3, a coalition of nearly 40 leaders across business, government and civil society who are dedicated to achieving the Sustainable Development Goals’ Target 12.3 to halve food waste and cut food loss by 2030.

I’m a member of the coalition because I think it matters that nonprofit leaders join with CEOs and others to share a common message: Food loss and waste is a solvable problem. it’s important for businesses and governments alike to know that there are very tangible reasons for doing something about it.

An estimated one-third of all food produced in the world is lost or wasted each year. That figure alone can seem daunting, but the non-financial benefits for action are clear, too.

Curbing food loss and waste can also curb climate change. An estimated 8 percent of greenhouse gases are attributed to food that’s produced and never eaten. If food loss and waste were a country, it would be the world’s third-largest emitter, right after China and the United States.

Reducing food loss and waste also saves natural resources. It takes more land than the size of China to grow all the food that’s never consumed.

There’s no value at all from using enormous land and water resources and warming the planet in order to produce a billion tons of food that ultimately don’t get eaten – particularly when one in nine people is malnourished in the world.

We now have the kind of financial evidence that reducing food loss and waste is the right thing to do for bottom lines and people’s pockets. I hope that will remove one of the barriers to tackling food loss and waste. We have to make use of this evidence to drive forward innovation, so that our food system becomes more sustainable, businesses thrive and we all save money.