This article was first published in the February 2017 issue of Petroleum Review under the title “What’s at Risk?”

Because the value of fossil fuel companies is based on the size of their reserves, it may seem counter-intuitive to see some of these assets as potential risks. But changes in market or economic conditions can make some reserves too expensive to tap, leaving them stranded – and their owners more vulnerable than the size of their reserves would indicate. Even majors such as ExxonMobil are not immune – the company recently announced that it no longer considers 20 percent, or 4.5 billion barrels, of its proved oil reserves to be extractable. This reduction applies mostly to the company’s oil sands deposits in Canada, which are expensive to extract and use, and therefore particularly sensitive to dips in oil prices. The write-down could be the largest single company revision in the history of the industry.

However, the high cost of extraction is only one factor that can create stranded fossil fuel assets. Another is the worldwide accepted goal to curb emissions to keep global temperatures from rising more than 2°C above pre-industrial levels. To realize this goal, an estimated one-third of all oil reserves, half of all gas reserves and over 80 percent of current coal reserves need to remain unused through 2050. If fossil fuel companies are required to leave a significant bulk of their reserves untapped, their valuations could decline steeply – that is, unless these companies preemptively adjust their businesses strategies to avoid these risks, for example by diversifying holdings to include more low or zero carbon energy sources like wind, solar and geothermal.

If prices of alternative energy, including wind and solar power, continue to drop as expected, the financial incentives for extracting existing fossil fuel reserves shrinks. Given the popularity of clean energy across the political spectrum, and the need for $90 trillion worth of infrastructure investment over the next 15 years, it makes sense to aim that investment toward low carbon projects. One way to encourage this kind of enlightened self-interest in investing is to help shareholders and other stakeholders understand the risk of potential emissions of fossil fuel reserves.

The connection between potential emissions from fossil fuel reserves and climate change is substantial, with enough carbon stored in untapped reserves to bust the carbon budget, which is the amount of emissions allowed before the 2°C goal is exceeded. Preliminary analyses show that the 200 publicly traded companies with the largest reserves of oil, gas and coal have enough carbon in their proved and probable reserves to equal 156 percent of the carbon budget.

This figure is based only on fuel burning and doesn’t count the considerable emissions from fuel production and processing. These upstream sources account for between 5 percent and 37 percent (an average of 15 percent) of fossil fuels’ total emissions, from exploration to consumption. As the world’s conventional fields get depleted and companies turn to fields that require more energy to extract, such as oil sands, upstream emissions are expected to increase.

Measuring and breaking down upstream emissions as a percentage of overall life cycle emissions indicates which reserves are the most energy-intensive to produce, and provides a clue as to which reserves are likely to be stranded. Furthermore, when combined with data on reserve size, potential emissions can act as an indicator of the carbon intensity of future production.

Currently there is no requirement that companies report on factors that could contribute to stranded assets and, as a result, individual shareholders could unwittingly be at risk. However, voluntary disclosure of these potential challenges is on the rise as investors demand more information about downside risk in their investments, especially fossil fuels. New analysis by Reuters shows that 48 percent of the world’s 4,400 largest companies report their emissions to investors and other stakeholders. 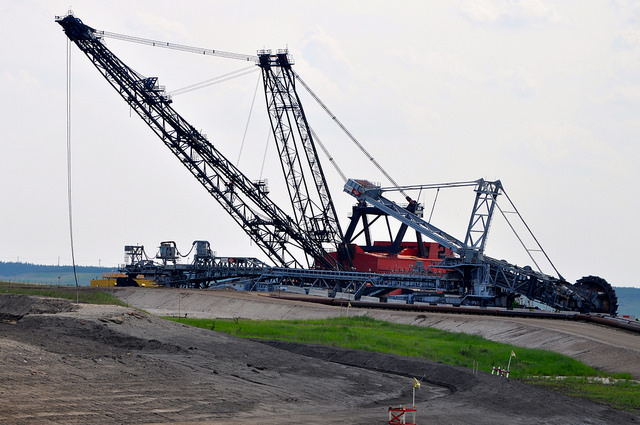 Oil sand deposits, common in Canada and Venezuela, are energy-intensive and expensive to extract, making them vulnerable to dips in oil prices. Photo by Rainforest Action Network/Flickr

This trend toward disclosure is likely to continue as part of the push for socially responsible investing that has grown 10-fold since the 1990s and continues to outpace other strategies. Investors are most concerned about the future performance of companies, and data on potential emissions from reserves offer valuable information about a company’s future prospects. Climate protection policies, like Canada’s carbon tax, could affect the value of their assets and eventually profits, so it is essential for investors to know the potential emissions so that they can calculate the expected liability. And now that climate change has secured a permanent slot on the world’s priority list, policies to curb emissions are destined to propagate and strengthen.

Investors have already collaborated on a number of initiatives to standardize the disclosure of carbon-related data and make data more readily available in the fossil fuel industry – and these initiatives are now likely to include potential emissions. By reporting potential emissions from their reserves, companies can reassure their investors that they are acknowledging the emergence of climate protection policies and market signals driving the world towards a low carbon future.

Alarmingly for investors, not a single fossil fuel company currently discloses potential energy-intensive fields. Upstream emissions account for 5–37 percent of fossil fuels’ overall greenhouse gas emissions – to date, analyses of potential GHG emissions have not taken this into account emissions from reserves. But that could change. The Financial Stability Board – made up of the 20 most powerful central bankers and finance ministries in the world – recently called for companies to disclose climate-related risks, both financial and physical.

These trends are occurring against a backdrop of dramatic political change and a shifting international landscape. As part of the Paris Agreement on climate change, which entered into force in November 2016, nearly 200 countries committed to significantly cut their greenhouse gas emissions and take other actions necessary to avoid the worst consequences of climate change. Although US President Donald J Trump has hinted he is less than committed to the pact, the rest of the world has shown steely determination to push forward. California Governor Jerry Brown, who oversees the sixth largest economy in the world (it surpassed that of France last year), has vowed that the state will not back down from its aggressive efforts to lower emissions and tackle climate change. Other US states and major cities have reaffirmed their resolve to push forward as well.

The private sector has heeded the regulatory and physical risks related to climate change and has made significant strides to address it. For example, more than 200 companies have committed to set science-based targets to curb emissions in line with the global effort to keep temperature rise under 2°C – including NRG Energy, Wal-Mart, DuPont and other heavy hitters. In addition, 640 companies and investors have committed to climate action through the We Mean Business coalition. Despite a decline in the price of oil and gas, the shift to cleaner, zero emissions energy is underway and seems destined to continue. Clean energy investment broke new records in 2015 and is now seeing twice as much global funding as fossil fuels. The desire to bring back US jobs to heartland states is already being realized in states like Florida, Kansas and Colorado, where over 21,000 factory workers are making the majority of domestic wind farm components. The number one fast growing job in America this decade? Wind turbine service technician. The solar industry is growing fast as well, creating jobs at a pace 12 times faster than the rest of the US job market.

So, how can a company measure and report potential emissions from their reserves? The WRI methodology mentioned earlier is based on industry standards for estimating and disclosing the size of reserves, ensuring companies will already have much of the data they need. First, you start with reported reserve quantities, which represent the amount of hydrocarbons available for sale or transfer to downstream operations. Then you adjust these quantities to reflect losses or usage in upstream production and processing operations, or activities that can store carbon and reduce potential emissions. This data offers all you need to convert to potential emissions, which then can be reported in using a standardized template for disclosure to investors and other external users.

Fossil fuel companies are at the nexus of two major trends. Governments around the world are committing to ever more aggressive targets for curbing carbon emissions, presenting risks that some reserves will become stranded. And investors are demanding increasingly more information on emissions to support risk analyses and investment decisions. Being open about potential emissions is central to how fossil fuel companies respond. We expect that potential emissions data will become part of standard disclosure practices, not only through government mandates, but mainly because corporations will realize the benefits of less business risk, happier investors and a more sustainable world.

First published in Petroleum Review in February 2017 Licensed for print and electronic distribution to WRI and sites owned by WRI exclusively. (c) This information is the intellectual property of the Energy Institute.