Intact forest landscapes (IFLs), or vast stretches of unbroken forest wilderness, are some of the most important ecosystems in the world. Their intactness makes them uniquely valuable to nature—they regulate temperature and rainfall across continents, provide homes to indigenous peoples, have some of the highest biodiversity rates and store huge amounts of carbon, among other benefits.

But they’re also under threat. According to a new report in Science Advances, the amount of forest that meet IFL criteria decreased in size by 7.2 percent between 2001 and 2013. This is an area more than twice the size of California that is no longer considered “intact forest.” Furthermore, the rate of IFL area reduction increased during the study period.

Fragmentation by new road networks from industrial timber and oil and gas extraction, agricultural expansion and fires are the main causes of lost intactness. If the trend doesn’t reverse, the world could lose much of its unbroken forest tracts this century, posing problems for nature, the climate and human well-being.

Where Are Intact Forests Being Fragmented?

Countries with the largest remaining areas of IFLs are found primarily in boreal and tropical regions. These areas also experienced the greatest amount of fragmentation over the past decade. 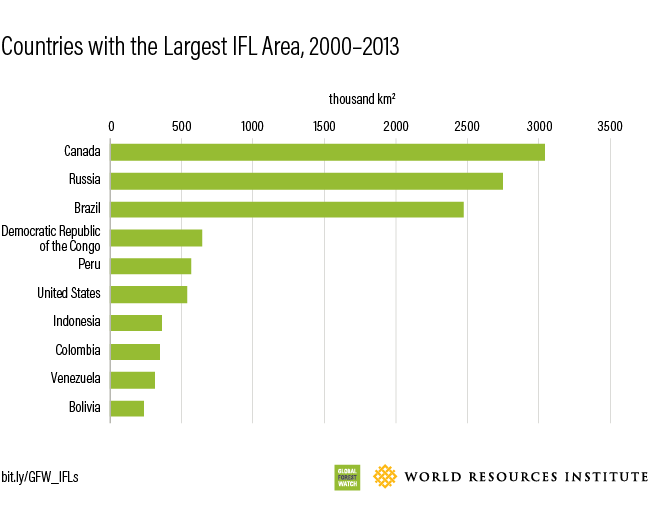 Russia had the greatest area of IFL reduction, thanks largely to oil and gas extraction linked to extensive human-caused fires. In Brazil, agricultural and pasture expansion drove IFL fragmentation. In Canada, fires were the leading driver, but unlike Russia, scientists believe they started due to natural causes. Paraguay lost nearly 80 percent of its IFL area. 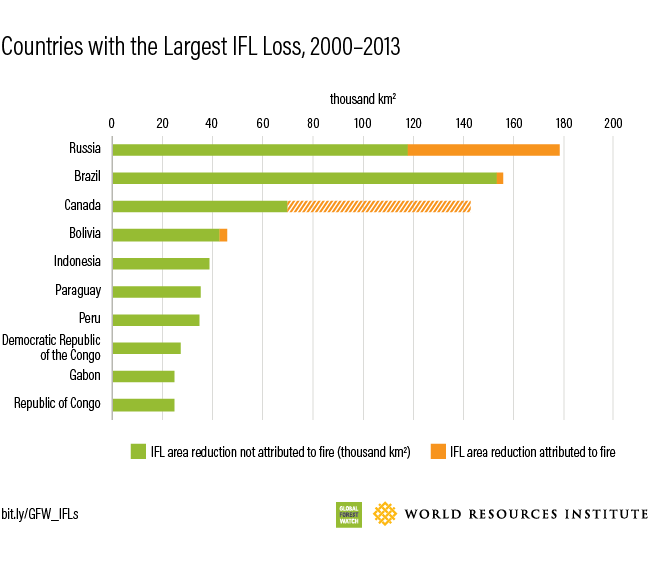 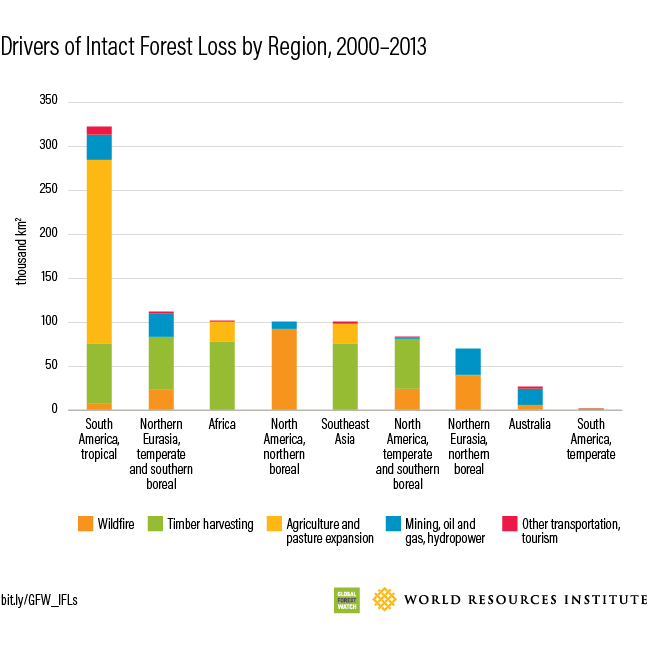 The Problem with Losing Forest Intactness

IFLs are unique and irreplaceable. Intactness cannot easily be regained—once altered, complex assemblages of biodiversity would be nearly impossible to restore. The extension of new roads into remote forest areas facilitates human access, and can lead to an irreversible cascade of changes – including wildlife habitat loss, unregulated hunting, increased human settlement and population density, forest clearing from logging, forest loss from agricultural expansion, fires, and other changes that degrade forest and may eventually convert vast forest areas to other land uses.

Intact forests also offer a unique opportunity to mitigate two of the greatest environmental challenges Earth faces: climate change and extinction. On average, tropical IFLs store triple the amount of above-ground carbon of non-intact tropical forests. Globally, scientists estimate that tropical rainforests contain half of the earth’s species of plants and animals despite occupying only 2 percent of global area.

Boreal forests have huge soil carbon stores. While they store less above-ground carbon than their tropical counterparts, boreal IFLs occupy a vast area and include the largest intact forest areas worldwide, making up 36 percent of global IFL area. These IFLs play an important role in the protection of permafrost, critical to preventing the release of climate-warming carbon and methane locked in soils.

To date, international agreements and national forest commitments generally do not address preservation of intactness as a high priority. This lack of political will is a major factor facilitating the continued exploitation of IFLs. 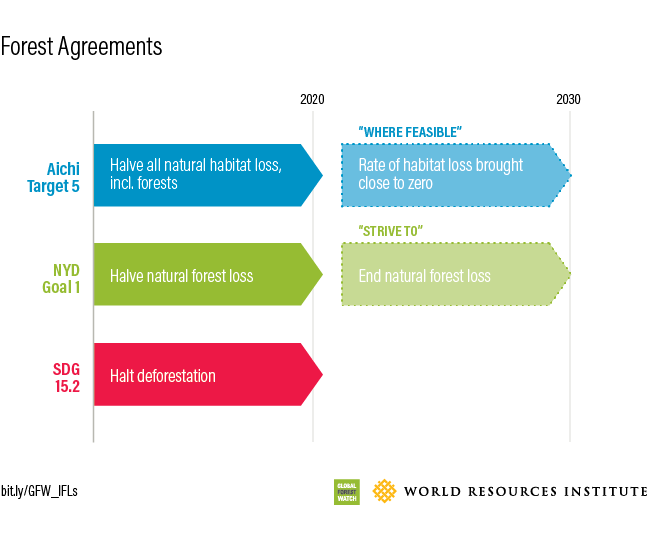 While major international forest commitments like the Convention on Biodiversity Aichi Biodiversity Targets, UN New York Declaration on Forests and UN Sustainable Development Goals have put forth ambitious goals to halt forest loss in short time frames, they lack sufficient guidance on the means to achieve them. IFLs are arguably the most important forest areas for prioritization in achieving many of these targets, and offer a measurable benchmark to making progress towards goals. The latest research in Science Advances also shows that designating IFLs as protected areas has proven effective at limiting their fragmentation, so countries should consider IFLs as high-priority candidates when existing protected area networks are revised or expanded. Moving agricultural expansion to already-degraded lands, as well as increasing the yields of existing agricultural lands, can also help reduce pressure on remaining intact forests.

The Global Forest Watch (GFW) platform offers tools and data to monitor and share information on how forest change is impacting IFLs. IFL boundaries are available on GFW, and can be combined with near-real time tree cover loss and fire alerts to monitor threats in near-real time. Users can subscribe to receive email notifications of new alerts within an area of interest.

GFW researchers also working to identify recent forest loss within important forest areas, such as IFLs or protected areas. These “Places to Watch” will soon be available, and will be distributed regularly to local NGOs and journalists to help facilitate interventions.