The catastrophic fire that originated in the Great Smoky Mountains National Park has caused 14 deaths, 150 injuries, and damaged or destroyed more than 2,400 homes and buildings around Gatlinburg, Tennessee. While the fire is nearly extinguished now, the blaze scorched an enormous area in a region that has not experienced this type of devastation in memory. While two juveniles have been charged with arson for setting the fire, it raged out of control thanks to high winds and tinder-dry forests amplified by exceptional drought.

The situation is tragic, but it’s hardly unique. It mirrors a spate of unusual fires that have devastated many parts of the world over the past two years—blazes that may become more common as climate change continues to increase global temperatures.

In 2015, the United States saw 10 million acres of wildfires, the highest amount ever recorded. Meanwhile, devastating fires in Indonesia generated greenhouse gas emissions that exceeded the daily emissions of the entire U.S. economy.

The southern Appalachians experienced above average and even record-breaking temperatures from August to October 2016 and below-normal precipitation, resulting in exceptional drought conditions. In November 2016, intensive fires burned across many locations in North Carolina, Tennessee, Georgia and South Carolina; one of these fires raged across the Great Smoky Mountains National Park and Gatlinburg, Tennessee on November 29th, leading to this most recent fire catastrophe. 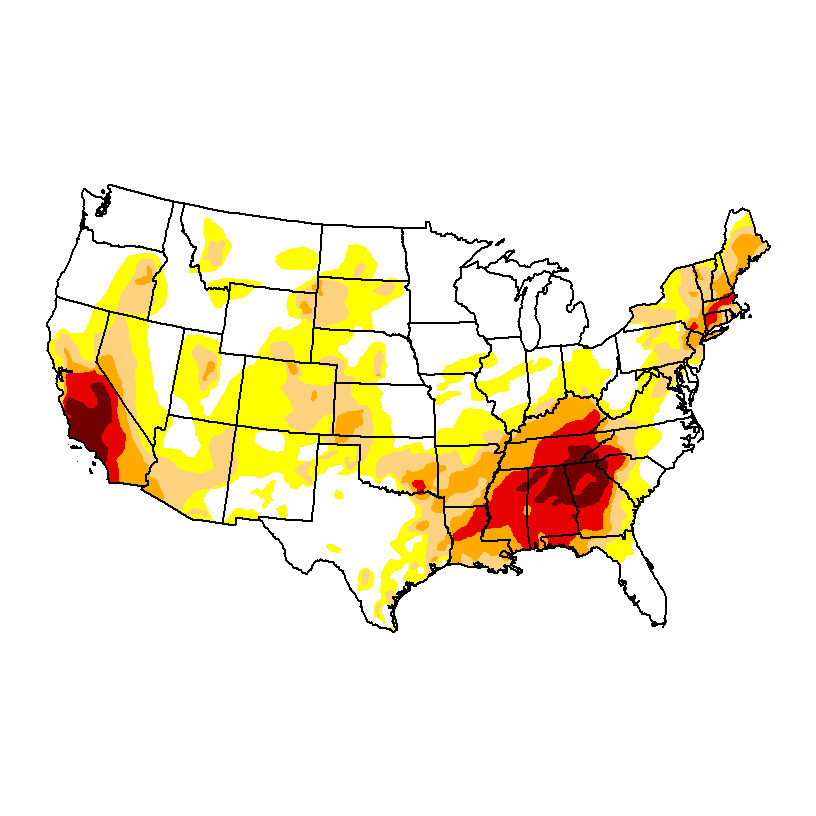 In late November, severe (orange) extreme (red) and exceptional (dark red) drought spread across much of the southern Appalachian region. Photo by US Drought Monitor

We Can Expect More Fires in a Warmer World

Some of these fires—such as those in Indonesia—are thought to have been influenced by the 2015-16 El Niño, which brought wide departures from normal conditions around the globe and contributed towards 2015’s record-breaking global temperatures. Whether climate change will influence the frequency and intensity of El Niño cycles in the future is uncertain.

And while it’s impossible to point to climate change as causing or contributing to individual forest fires, we do know events, such as extreme drought and heat waves, have been amplified by climate change and may increase in frequency and intensity in a warmer world. As the world’s climate warms, extreme weather events are occurring more and more frequently, with the U.S. National Climate Assessment projecting a continued increase in certain types of events across the United States. The southeastern United States has already seen more  weather and climate disasters costing $1 billion or more in the past 30 years than any other region of the country. And there is very high confidence that climate change will lead to an increase in large wildfires and longer fire seasons in parts of the United States.

Disasters such as the Smoky Mountain wildfires are a stark reminder that people everywhere need to prepare for the possibility of extreme or unusual events. Better fire preparedness may include both improving planning for fires and fire response,   managing forests to reduce fire risk (especially for urban-wildland interface zones), and working with landowners to reduce flammability of homes and other structures.

Areas that have seemed invulnerable to wildfires in the past may increasingly be in danger, and past experience may not be our best guide to what the future holds. As recovery and rebuilding begins from this most recent disaster, the tragedy should serve as a wake-up call—a warmer future is one with more intense, frequent and unpredictable forest fires.