Home > Blog > Choose or Lose: Why Gisele and I Are Shifting to a Sustainable Diet
Comments
|
Add Comment
|
Print
Tweet

In just a few short years, growing and eating sustainable food has moved from a fringe idea into the mainstream. With a major boost from First Lady Michelle Obama’s garden, nutritionists, community non-profits, environmentalists, and food producers and suppliers have rallied around this idea. During the Obama administration, the U.S. government embraced sustainable food, including setting a target to halve food waste by 2030. Although we don’t yet know what the next administration will do, food choices largely rest with individuals, families, businesses and city leaders.

Embracing a sustainable food system can bring a host of benefits, including getting more food to those who need it, while lowering household bills and lowering emissions that drive climate change.

By 2050, the world will need to feed more than two billion additional people. Food production and consumption is already responsible for 9 percent of emissions in the United States and the agriculture sector accounts for 24 percent globally. Agriculture accounts for 70 percent of freshwater withdrawn from rivers, lakes and aquifers, and agriculture remains the leading driver of tropical deforestation today.

Shockingly, a third of the food we produce is wasted, costing $940 billion per year. In a world where so many lack enough food to eat, that is morally unacceptable, not to mention economically wasteful and environmentally destructive.

Fortunately, awareness of the importance of sustainable food is on the rise. Cities like New York and Portland are setting their own targets, and restaurants and dining halls are eliminating food waste from their operations. A group of 40 executives across government, business, international organizations, research institutions and civil society have come together to form the Champions 12.3 coalition, mobilizing progress toward the global goal of cutting food loss and waste in half by 2030.

Moving toward a sustainable food future will require both a top-down and bottom-up approach, and you can join in this increasingly popular kitchen-table topic.

You won’t be alone. This week, a new episode of the National Geographic series Years of Living Dangerously focuses on the history of clear cutting trees in the Amazon to create grazing land for cattle. I was fortunate to appear in the episode alongside one of Brazil’s most popular icons, Gisele Bündchen. When I met her, Gisele had just returned from Brazil and spoke eloquently about her own journey to reduce her family’s beef consumption. At WRI, we found that producing meat and dairy makes up almost 85 percent of the greenhouse gas emissions from the American diet, with nearly half of those diet-related emissions from beef alone. Shifting to a more plant-based diet can have a big impact. 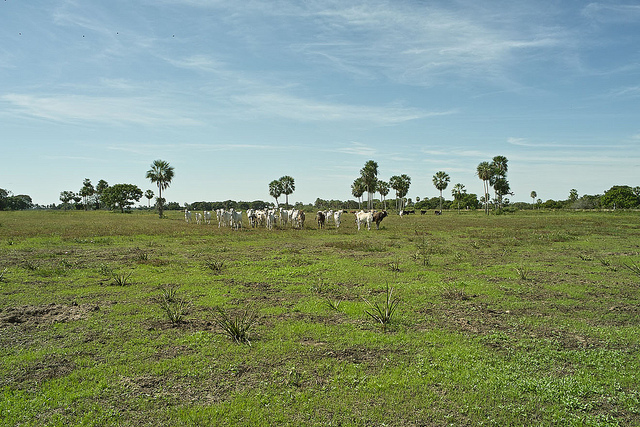 Farming and ranching are drivers of deforestation. Photo by Povi Abrahamsen/Flickr

Attention to how people’s diets impact the environment and climate is gaining prominence. Business leaders are examining what food they supply, as more than three-quarters of Americans cite sustainability as a factor in food purchasing. Financiers are also concerned about investing heavily in animal-based food production, with 40 large institutional investors worth more than $1.25 trillion now encouraging companies to diversify into plant-based food markets.

WRI research finds that Americans could cut their diet's environmental impact in half just by eating less meat and dairy. Photo by Serena Epstein/Flickr

National governments are also making changes. In China, for example, the government recently issued dietary guidance, urging the public to eat less meat for health reasons. And several other countries—including Brazil, Germany, Qatar and Sweden—include not only health but also sustainability considerations in their national dietary guidelines. Given that global demand for meat and dairy is projected to increase by 80 percent between 2008 and 2050, efforts to reduce that demand is crucial to protect forests and slow climate change.

The table is now set for people to make their own choices about what type of food they eat, how much they eat, and how they can reduce food waste. Moving to sustainable diets will have ripple effects from America’s kitchens and people’s wallets to their trash cans and ultimately to the planet itself.