Home > Blog > If Climate Change Is the Existential Crisis of Our Age, Why Isn’t it Getting More Attention?
Comments
|
Add Comment
|
Print
Tweet

The evidence is everywhere. Drought dries up farmland from California to the Sahel. African migrants flock to Libya and Europe to escape deadly heat, hunger and encroaching deserts. Rising seas threaten coastal communities with storm surge and flooding. These are the 21st-century impacts of a changing climate — threats we know are poised to worsen as temperatures and heat-trapping greenhouse gas emissions continue to climb.

But if climate change is the existential crisis that scientists and others say it is, why isn’t it part of every serious discussion about the future?

The topic has been largely ignored in the U.S. presidential election. Climate change coverage on major broadcast networks actually declined by 5 percent between 2014 and 2015, despite more newsworthy events on the subject than ever before. 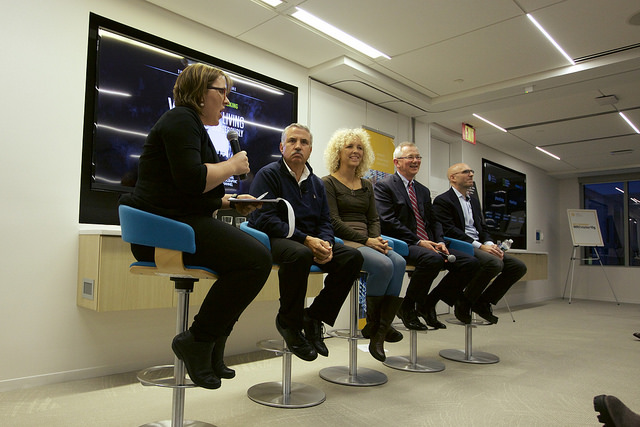 Romm pointed to other movements that have effectively moved from the shadows and into the mainstream of public discourse, such as the fight for equality for LGBT citizens. This will require individuals to raise the issue’s profile, talk about climate change with their friends and recommend programs like Years of Living Dangerously. Once the public becomes informed and engaged, the politicians will follow. “[Change happens] when politicians understand not that 60 percent of the population kind of cares about it, but that for 5-10 percent of the population, this is all they care about,” Romm said.

Despite the fact that 97 percent of scientists agree that climate change is real and fueled by human activities, the issue remains highly partisan in the United States. “If we’re going to make the progress we need, the ridiculous politicization of the issue in this country needs to change,” said Steer. “There’s absolutely nothing political about climate change.” Steer highlighted the need to make a pragmatic case to policymakers, offering rational answers to their concerns.

Pushing climate change to the top of agendas will also mean breaking the ties between powerful fossil fuel corporations and politics. “We have to get to the systems that underlie that,” Morgan said. “Campaign finance reform, looking at corruption — all of that takes a lot of courage.”

“The way you get change is to get the big player to do the right thing for the wrong reason,” said Friedman, rather than waiting for all players to do the right thing for the right reason. That means turning the fossil fuel lobby’s tactics against them. “[Change won’t happen] unless politicians feel the real pain and wrath that people are going to vote on this issue, and until there is a climate lobby that punishes people for how they vote on this issue just as the oil companies do,” he said. This needs to happen in the real world, not the virtual one: “You have to get out of Facebook and into people’s face.”

It’s also important to think outside the box. Morgan pointed to a youth organization recently suing the Norwegian government for drilling in the Arctic, claiming that it violated the Paris Agreement and the country’s constitution. “We have to get a bit crazy,” Morgan said.

Despite mounting climate impacts and radio silence from politicians, media and other important players, the panelists were hopeful that climate change will soon earn the attention it deserves.

“Change happens really, really slowly until it happens really, really quickly,” Romm said. He pointed to the technology sector as one tipping point we’re already seeing. “You can buy an LED lightbulb in Costco for $3 now, and within five years, no one is going to be selling anything else,” he said. “Three countries have said they’re in the process of banning internal combustion cars. People should despair at the world we’ve created to this point, but they should not despair that it’s hopeless. There’s plenty of hope.”