Welcome to WRI’s six-part blog series focusing on the future of tonewoods, the woods used in musical instruments. In each installment, we look at a different species of tree used for a certain part of a guitar. Each wood presents its own challenges and possibilities surrounding sustainable harvest.

To build our acoustic guitar, we first need to choose a wood for the soundboard (the top of the guitar), which determines most of the guitar’s tone, or quality of sound. We want a wood that is both stiff and light, which helps it transfer the most sound from the vibrating string. The best slabs of wood will actually ring like a wine glass when tapped. One of the favorites for guitar soundboards is old-growth Sitka spruce. Old-growth Sitka spruce is a case where sustainable forest management and conservation are not mutually exclusive, but where perfectly legal wood may nonetheless come from environmentally destructive clear-cutting primary forests. 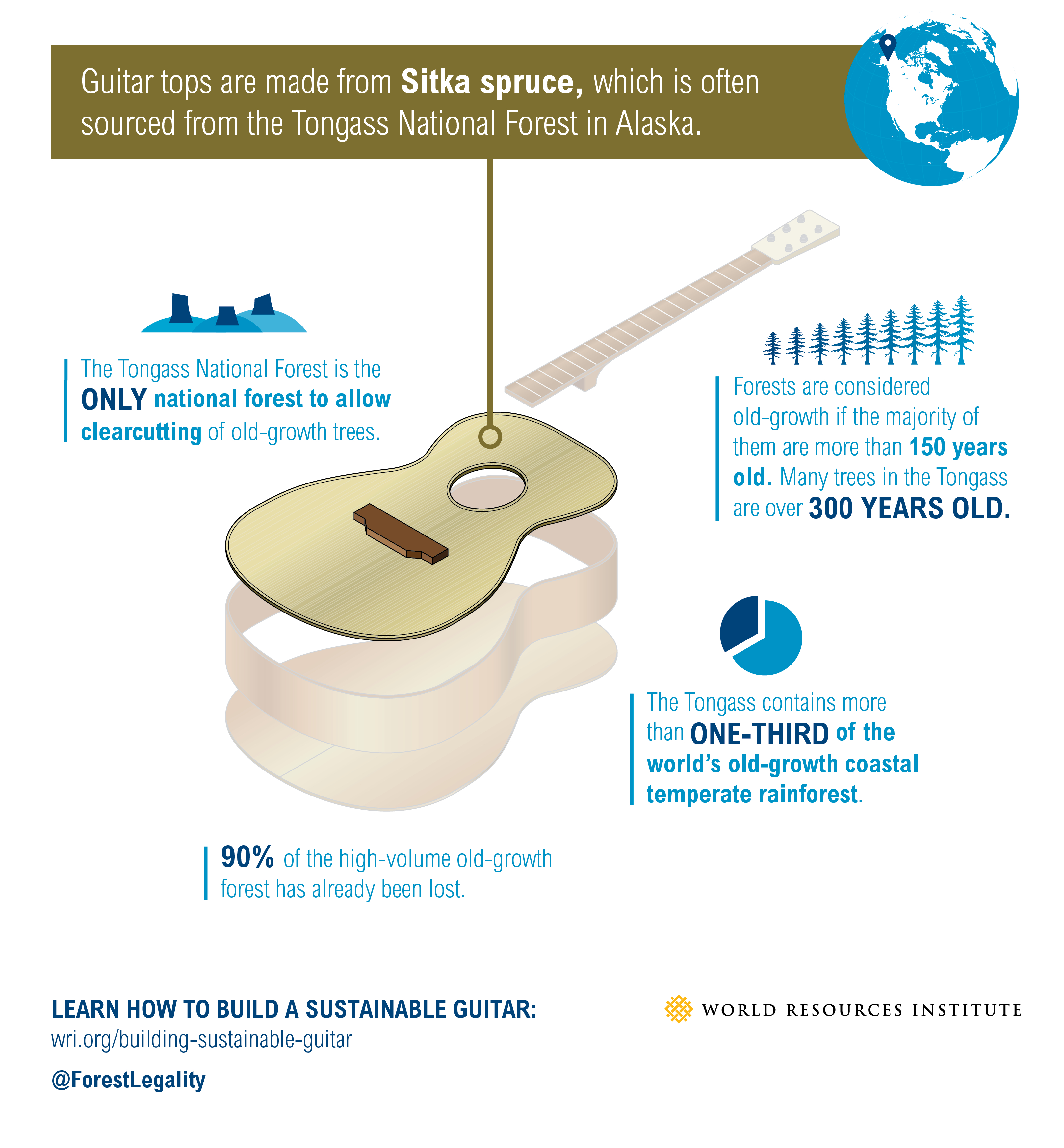 Sitka spruce (Picea sitchensis) is a giant spruce native to coastal temperate rainforests in the U.S. Pacific Northwest. It is one of the largest, most commercially-viable woods in the region, with old-growth stands including many trees over 600 years old and 200 feet tall.

Thanks to their long, slow growth, these old-growth trees have tight growth rings that give them a great sound in instruments, with little of the cellulose fiber between rings that can deliver poorer tone. Young Sitka spruce grow quickly and are perfect for construction, but have too much cellulose fiber for instruments. The older trees are, pound-for-pound, stronger than steel. Their wood was even used for propellers in airplanes in both World Wars.

Other spruce varieties have long been used in instruments. European spruce from the Alps was used in Stradivarius violins. The first steel-string guitars from the early 20th century were made of Adirondack spruce. The sounds created by musicians ranging from cellist Yo-Yo Ma to country legend Johnny Cash were produced from instruments made of spruce. 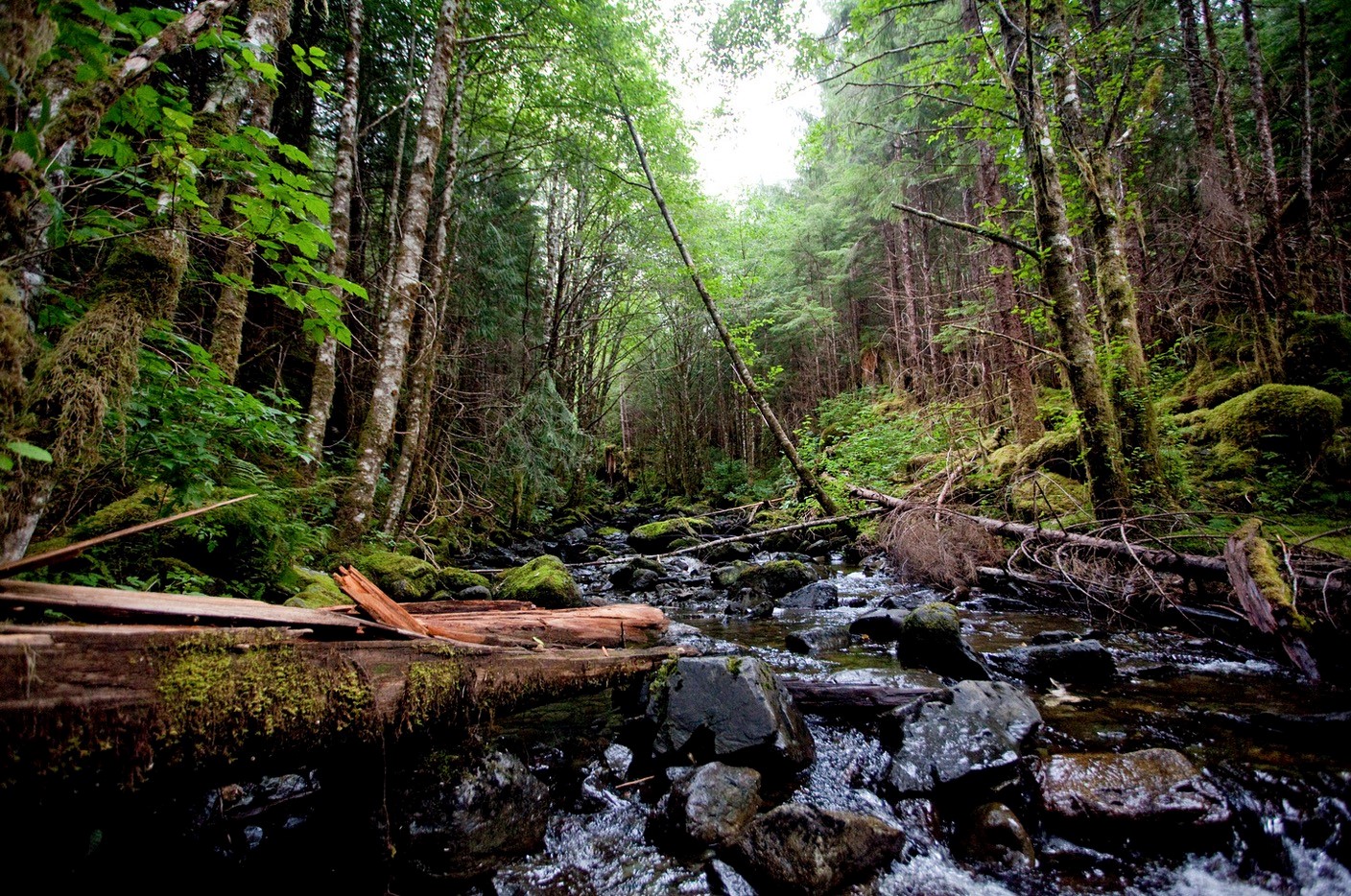 Today, the conversation about Sitka spruce centers around one place: the Tongass National Forest in southeastern Alaska, a 17-million-acre swath that stretches across 500 miles and is the largest national forest in the United States. One of the most ecologically diverse regions in the country, the Tongass holds a third of all of the world’s temperate rainforest. Its Sitka spruces are among the oldest and largest in existence – some were alive when Columbus arrived in North America – and provide essential environment for salmon, bears and bald eagles. Tongass tourism is a billion-dollar business each year.

While Sitka spruce is not listed as endangered under the CITES Treaty (the multilateral treaty to protect internationally-traded plants and animals), it is at the center of debates over sustainable forest management in the United States. The Tongass old-growth Sitka spruce forests are disappearing due to clearcutting subsidized by the U.S. Forest Service at a cost to taxpayers of $20 million annually. Estimates show that more than half the original old-growth forests have already been lost and, at current harvest rates, these forests will be eliminated in the next few decades. Clearcutting old-growth Sitka spruce threatens salmon fisheries, tourism and the biodiversity of the region, yet is allowed because of the relative abundance of young trees, which the law sees as identical to the oldest in the Tongass. In early July 2016, the Obama administration proposed phasing out cutting of old-growth in the Tongass over the next 16 years. Many biologists and environmental activists believe, however, that this should happen on a much shorter timescale.

Innovators in the guitar industry are pushing for sustainable Sitka spruce harvesting. Tom Bedell of Bedell Guitars is leading the Musicians for Forests campaign, which calls for an industry-wide moratorium on clear-cut Sitka spruce by the end of 2016. This would transform the guitar industry’s traditional supply chain for Sitka spruce, and can provide an example for other higher-volume supply chains. Given the high profile of the music industry, this campaign has the potential to influence timber industry firms, consumers, and lawmakers. Bedell’s proposal would allow existing inventory of Sitka spruce to be “grandfathered in” to post-2016 guitars, but would limit future tonewood purchases to salvaged or selectively harvested trees. While this would raise the cost of raw materials, it will ensure a higher quality product and a long-term supply.

Tonewoods represent only a fraction of the Sitka spruce available in the Tongass, yet these crucial old-growth forests are being wiped out by clearcutting, much of it going to East Asia as cheap construction timber. In the case of Sitka spruce, legality is not always synonymous with sustainability. There is no excuse in a wealthy, industrialized country with strong forest management capacities for failure to balance demand with sustainable supply. With proper forest management, the Tongass contains more than enough trees to supply the guitar market with sustainable, top-quality wood, and the guitar industry can help preserve this national treasure. The future of tonewoods is intertwined with the future of the Tongass.

Stay tuned for the next installment in the series for a trip to Hawai’i to find out what Mexican cowboys, surfboards, Taylor Swift and genetic research have in common…

EDITOR'S NOTE, 8/5/16: A previous version of this blog misspelled picea, part of the Latin name of Sitka spruce, and incorrectly referred to it as a pine instead of a spruce. In the photo caption, the worker is routing, not sanding. We have corrected these errors.