This is the second installment of our Restoration Global Tour blog series. The series examines restoration success stories in Asia, Latin America, Africa, Europe and North America. Tune in over the coming months for additional installments, or check out our Restoration Diagnostic for more information.

Droughts and desertification fueled by deforestation, agricultural expansion and climate change have left African countries from the Sahel to the Congo Basin with sizable economic losses and little chance of food security. Roughly 65 percent of the continent’s land is now degraded, resulting in a 3 percent loss of agricultural GDP annually due to soil degradation and nutrient depletion on farmlands.

Despite these extreme circumstances, Africa also has the largest opportunity for landscape restoration in the world—more than 700 million hectares (1.7 billion acres), an area nearly the size of Australia, according to analysis by the World Resources Institute, the International Union for the Conservation of Nature (IUCN) and the University of Maryland (UMD). Three countries in particular have already started this process of restoration by empowering those it stands to benefit most—rural farmers.

Extreme deforestation and soil degradation have left less than 3 percent of Ethiopia’s native forests intact, contributing to $1-2 billion in economic losses annually. In the Humbo District, vast forest-clearing occurred in the late 1960s, largely the result of pressures from crop farming and unmanaged fuelwood collection. By the early 2000s, 85 percent of residents in the Humbo District were living in poverty as a result of intensive cultivation, overgrazing and deforestation on their land.

Farming constitutes about 85 percent of total employment in the region, which is why World Vision and the World Bank’s BioCarbon Fund worked with farmers in developing a program to restore 2,700 hectares (6,700 acres) of degraded and deforested land. This was achieved through a number of restoration practices, including “community-based natural regeneration,” in which people allow native trees and shrubs to regrow on degraded forest land from live stumps, underground roots and soil seedbanks—pruning mainly to manage densities and meet local needs for firewood. They also carefully manage livestock and close off entire areas to both humans and animals in order to allow native vegetation to regenerate. By supporting natural regrowth, villagers were not only able to restore trees to the landscape, but also produce and sell firewood, berries, fruits and nuts.

But all this wouldn’t have happened without securing land and resource rights for farmers. In many parts of Africa, farmers and communities lack legal ownership over their land or the rights to manage natural resources on it. This gives them little incentive to protect on-farm resources like trees, especially if they can’t reap benefits like income from selling firewood, fodder, fruits or other products.  During the implementation of the Humbo project, land ownership shifted from the state to local people via the Federal Rural Land Administration and Land Use Proclamation No. 456/2005, as well as the Rural Land Administration and Utilization Proclamation No. 53/2003. Seven community cooperatives with legal land title managed the project, and empowered local people to make their own decisions regarding the implementation of natural generation on individual plots.  A particularly important and additional innovation by the Humbo project was to formalize agreements with local communities to award them the rights to benefit from the income generated from the carbon sequestrated in the regenerated forest. 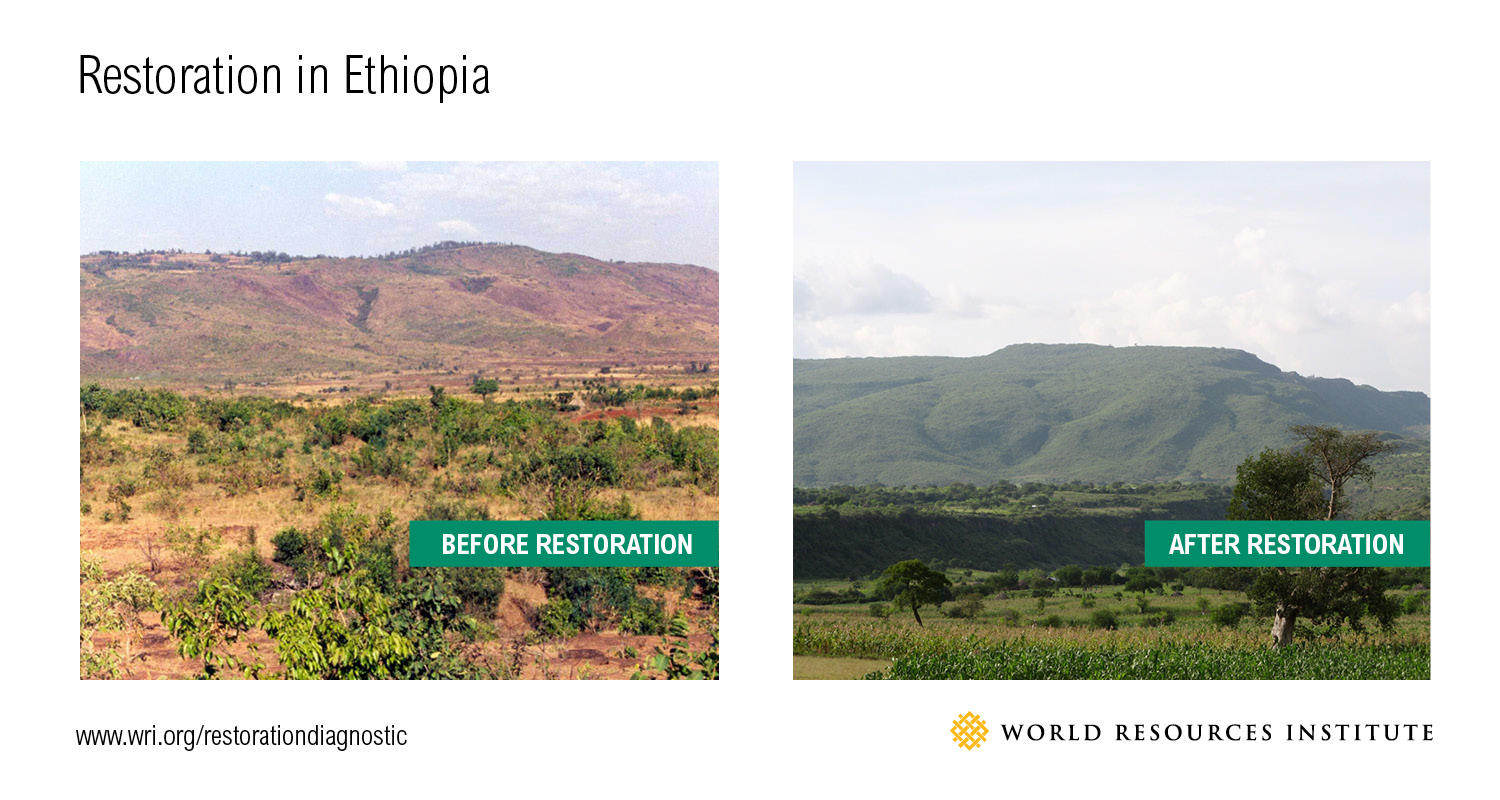 Widespread famine and rural poverty plagued the Maradi and Zinder regions of Niger in the 1970s and 1980s due to periodic droughts, desertification and crop failures. However, the outlook began to change by the mid-1980s as both regions started restoring landscapes through farmer-managed natural regeneration (FMNR), which led to a rapid expansion of new agroforestry systems. Once farmers allowed native trees like Faidherbia albida to regrow on agricultural lands, the root systems and falling leaves fertilized the surrounding soils. Since 1985, more than one million rural households in Niger have protected and managed trees across 5 million hectares (12.3 million acres) in the densely populated parts of Maradi and Zinder. These trees helped increase cereal production by 500,000 tons (enough to feed 2.5 million people) a year, raised incomes by 2 to 3 times from sale of products like edible leaves and honey, and sequestered an average of 5 tons of carbon per hectare of restored land.

This would not have happened without improving farmers’ rights to land and trees. Before the 1980s, trees and tree products belonged to the state. But in 1982, the government started a process leading to the revision of the Forest Code in 2004, which formally recognized people’s rights to use forest resources located in areas held by local communities. Empowering farmers to make their own decisions about tree management on their land ensured that food and livelihood improvements actually benefited them. 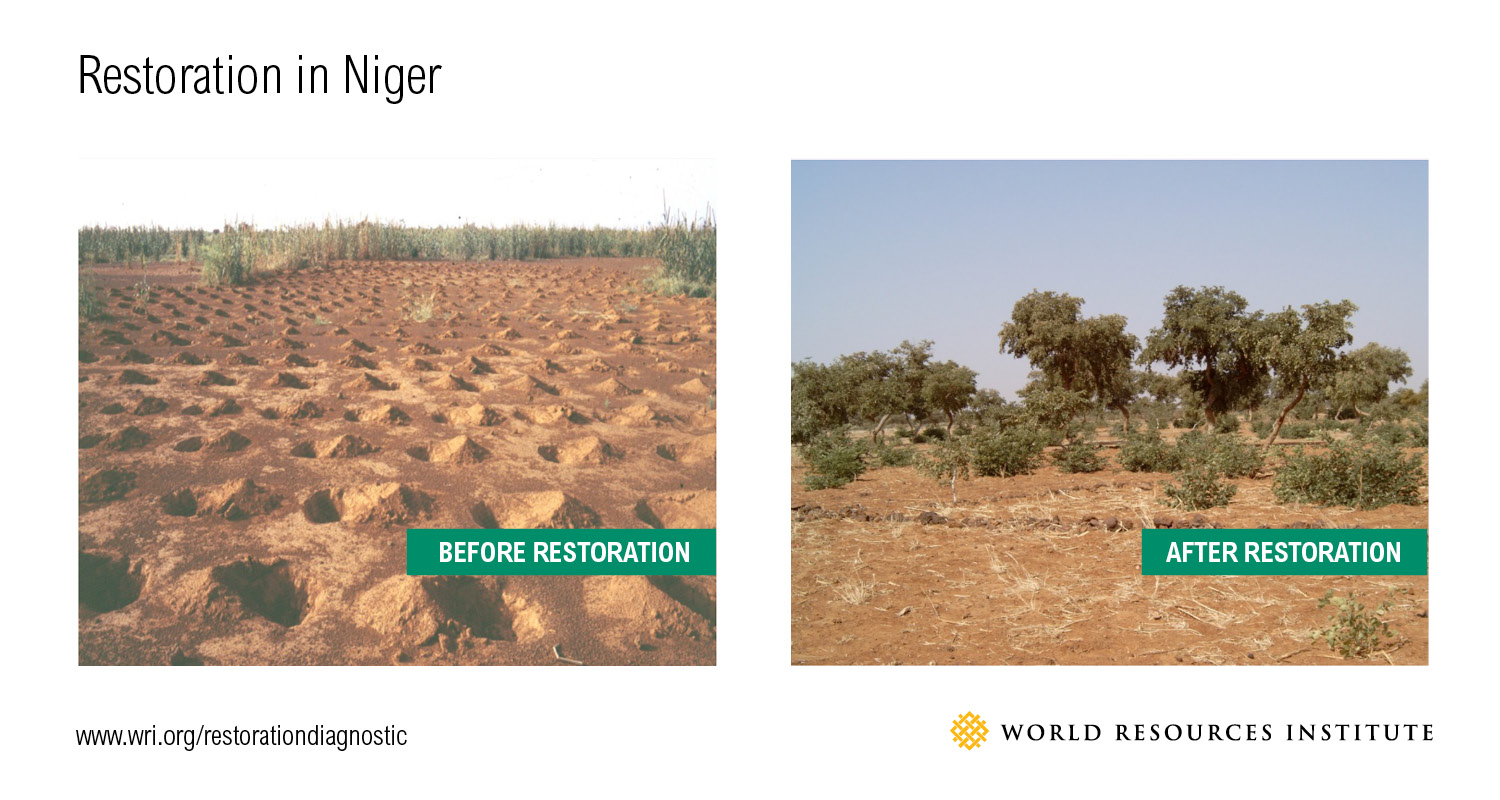 By 1985, Tanzania’s Shinyanga region had transformed into semi-desert, largely due to deforestation caused by agricultural expansion. Tanzania’s agricultural structure was such that farmers largely grew cash crops like tobacco and cotton, leaving little time or land available for subsistence farming.

So Tanzania’s government instituted a community-based program, the Shinyanga Soil Conservation Program (HASHI), in 1986. A key part included reviving the traditional FMNR practice called “ngitili,” which involves closing off an area of standing vegetation from livestock from the onset to the end of the rainy season. In the 18 years since its inception, the HASHI program has helped 2.8 million people restore 500,000 hectares (1.2 million acres) of individual and communal land. This provided the land necessary for growing subsistence crops, leading to better nutrition and income from agricultural products like honey and wild fruits.

The HASHI program also enhanced traditional forms of land ownership. Through the Land Act and Village Land Act of 1999, the state allowed district councils to modify land tenure status for local people, eventually allowing villagers to legally harvest and sell their own crops, and get exemptions from local taxes on forest products like charcoal and firewood. 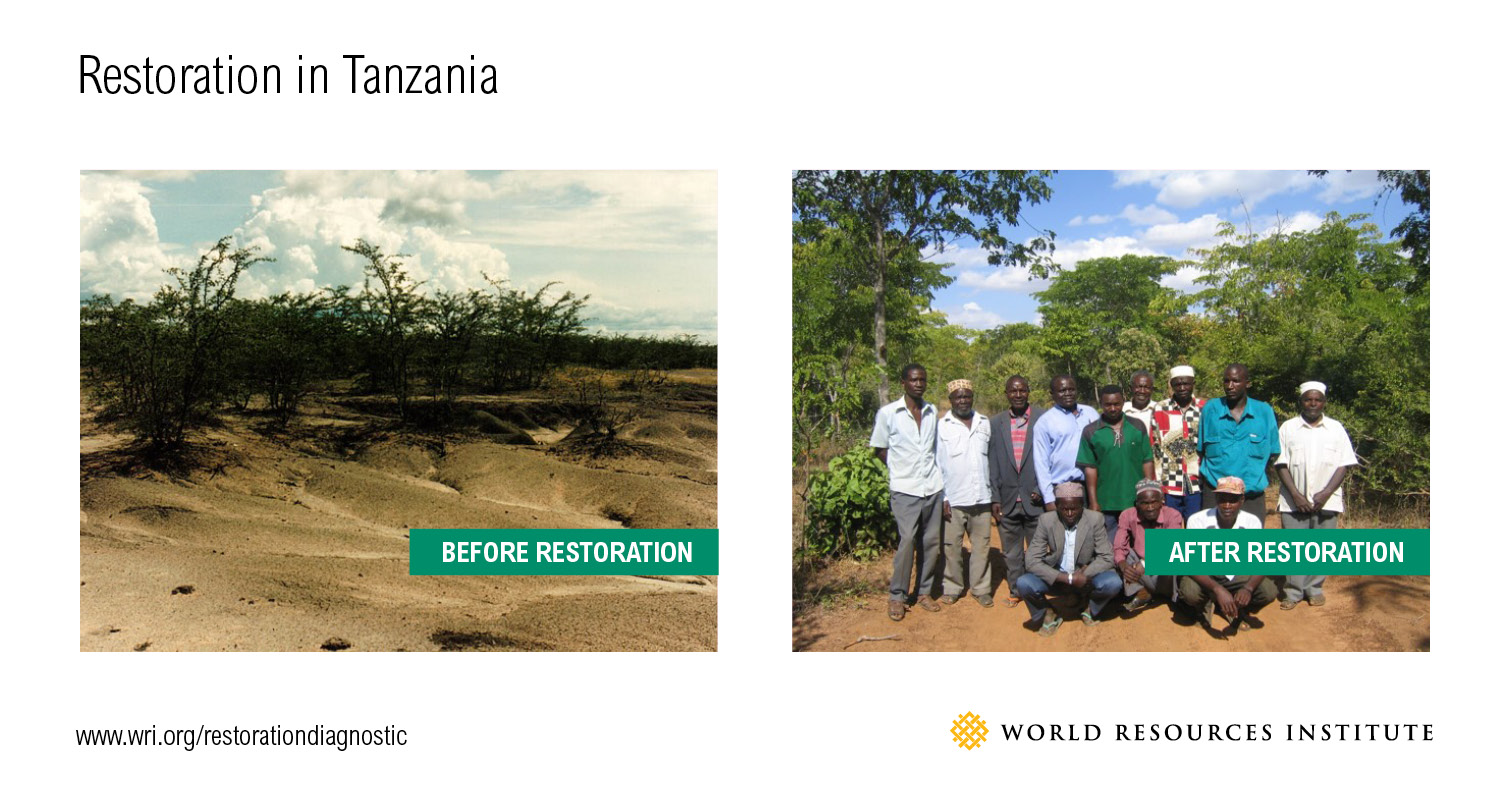 These successes have helped inspire a continental movement to restore 100 million more hectares (247 million acres) of land in Africa by 2030 through the AFR100 initiative. AFR100 seeks to ensure that restoration is carried out in ways that balance social, economic and environmental objectives, including empowering local groups by clarifying and securing their land and resource rights. So far, 13 African nations have committed to restore more than 46 million hectares, while impact investors have pledged $546.5 million. By building on successes so far, it’s clear that Africa can restore its landscapes back to productivity.