On Friday, the UNEP Emissions Gap Report joined a series of studies released over the past few weeks assessing how much countries’ recent climate change announcements, or intended nationally determined contributions (INDCs), contribute to combating warming. Collectively, the studies make it clear that the INDCs make a substantial contribution to bending the global emissions trajectory below our current path. However, the studies also show that without additional action, the INDCs are insufficient to limit warming to below 2°C and avoid some of the worst climate impacts. The details of the Paris Agreement are, therefore, very important to help achieve an additional bending of the emissions trajectory before 2020, to support the implementation of the INDCs and to ensure greater ambition after 2030.

While all of the studies support these general conclusions, their numbers differ both in terms of projected temperature increase relative to pre-industrial levels, as well as emissions levels in 2025 and 2030. Below we discuss the results of various studies assessing the INDCs and highlight differences among their underlying assumptions, which can help explain why some details of their findings diverge. The studies include those by Climate Action Tracker (CAT), Australian-German Climate and Energy College (CEC), Climate Interactive, Danish Energy Agency (DEA), European Commission Joint Research Centre (EC-JRC), the International Energy Agency (IEA), London School of Economics (LSE), Massachusetts Institute of Technology (MIT), MILES Project Consortium (MILES), PBL Netherlands Environmental Assessment Agency, the UNFCCC, and the UNEP Emissions Gap Report, which is itself an in-depth assessment of many of these studies. Some of these studies may still be updated after this blog is published.

INDCs are driving emissions down, but not fast enough.

INDCs put us on track for a world that is 2.7-3.7 degrees C warmer (median chance), depending on modeling assumptions.

The studies also find, however, that the INDCs do not reduce emissions sufficiently to limit warming to below 2 degrees C. Some of the studies model global temperature change under the INDCs out to 2100, and find that it will be higher than 2 degrees C. Other studies do not model temperature directly, but they still draw conclusions about temperature. They do this by comparing emissions in 2025 and/or 2030 under the INDCs to the levels that would be consistent with limiting warming to below 2C at the least possible cost. Either way, the result is the same - the INDCs are not sufficient.

The subset of studies that assess temperature increases suggest that with the INDCs, we will witness 2.7-3.7 degrees C (median chance) of warming compared with pre-industrial levels. This is an improvement over business-as-usual trends, which would lead to 4-5 degrees C of warming, but falls short of the goal to limit warming to below 2 degrees C. Since temperature impacts are calculated out to 2100, the studies’ findings depend significantly on assumptions about what happens to emissions after the target date specified in the INDC  -- 2030 for most countries, and 2025 for the United States.

Scenarios showing higher temperature increases by 2100, such as Climate Interactive INDC Strict, assume no continued progress after the INDCs are achieved. The scenarios showing lower temperature increases, such as the Climate Action Tracker, assume that mitigation effort of 2020-2030 continues throughout the century. There are also additional scenarios that have been studied by some analysts (e.g. the MILES study’s “Bridge Scenario”) that examine what additional targets and policies would have to be adapted to limit warming to 2 degrees C. 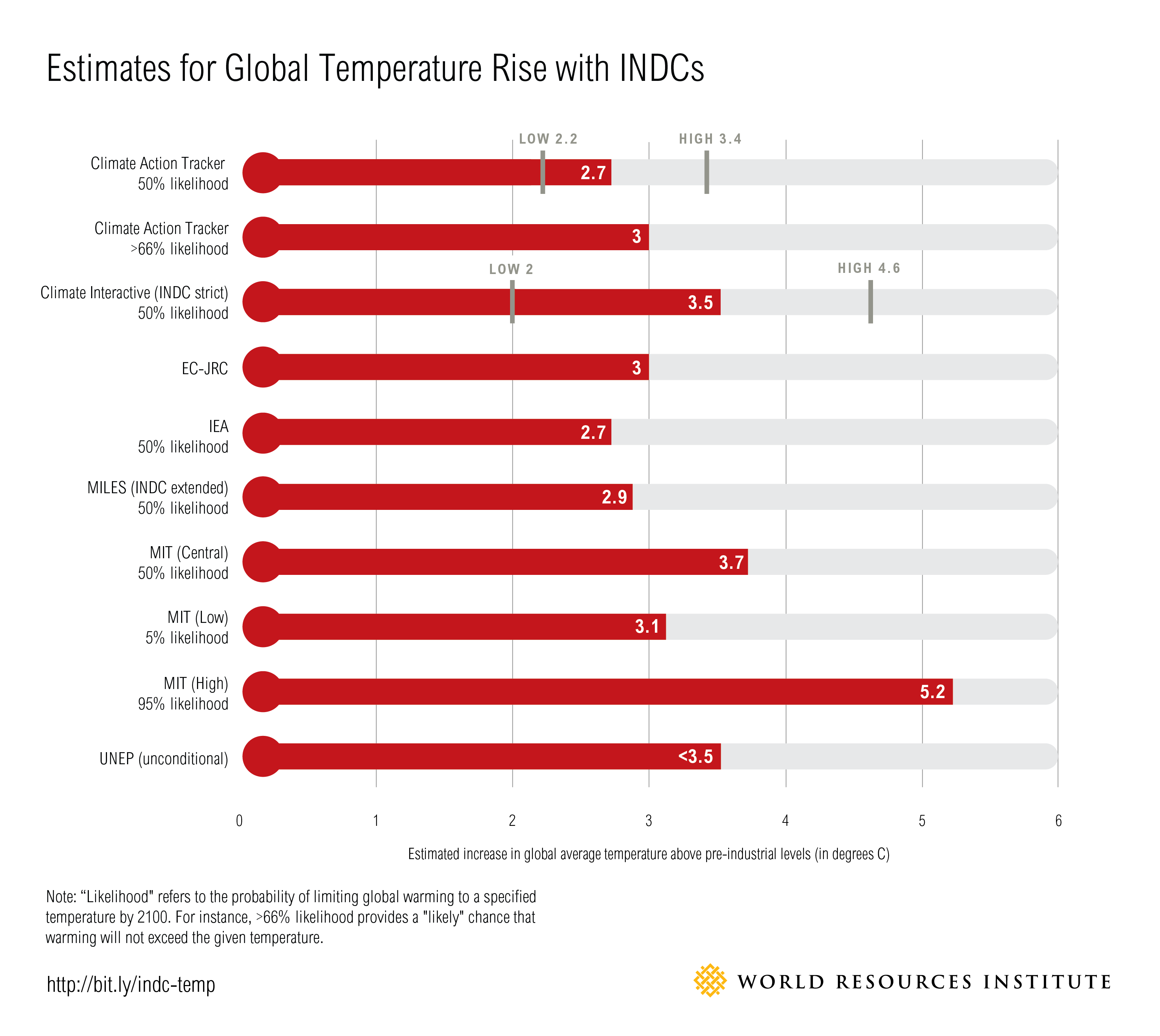 Emissions levels in 2025 and 2030 have significant consequences for our ability to limit warming to 2 degrees C.  The higher emissions are in the near term, the greater the required emissions reductions in later decades for limiting warming. Steep rates of emissions reductions are far costlier than more gradual rates of decline. They also risk of failing to achieve the 2 degrees C target, and rely more on carbon dioxide removal technologies (e.g. bioenergy and carbon capture and storage), which have yet to be proven at scale.

The IPCC Fifth Assessment Report finds that if emissions levels are above 55 Gt CO2e in 2030, they require 6 percent per year rates of emissions decline between 2030 and 2050 (compared with 3 percent/year in cost-effective scenarios). A 6 percent rate of emissions reductions is unprecedented—emissions reduction rates during the collapse of the Soviet Union led to declines of 2-4 percent annually—and it will be exceedingly difficult to overcome the lock-in of carbon-intensive technologies, while at the same time rapidly scaling up zero and low-carbon energy sources. 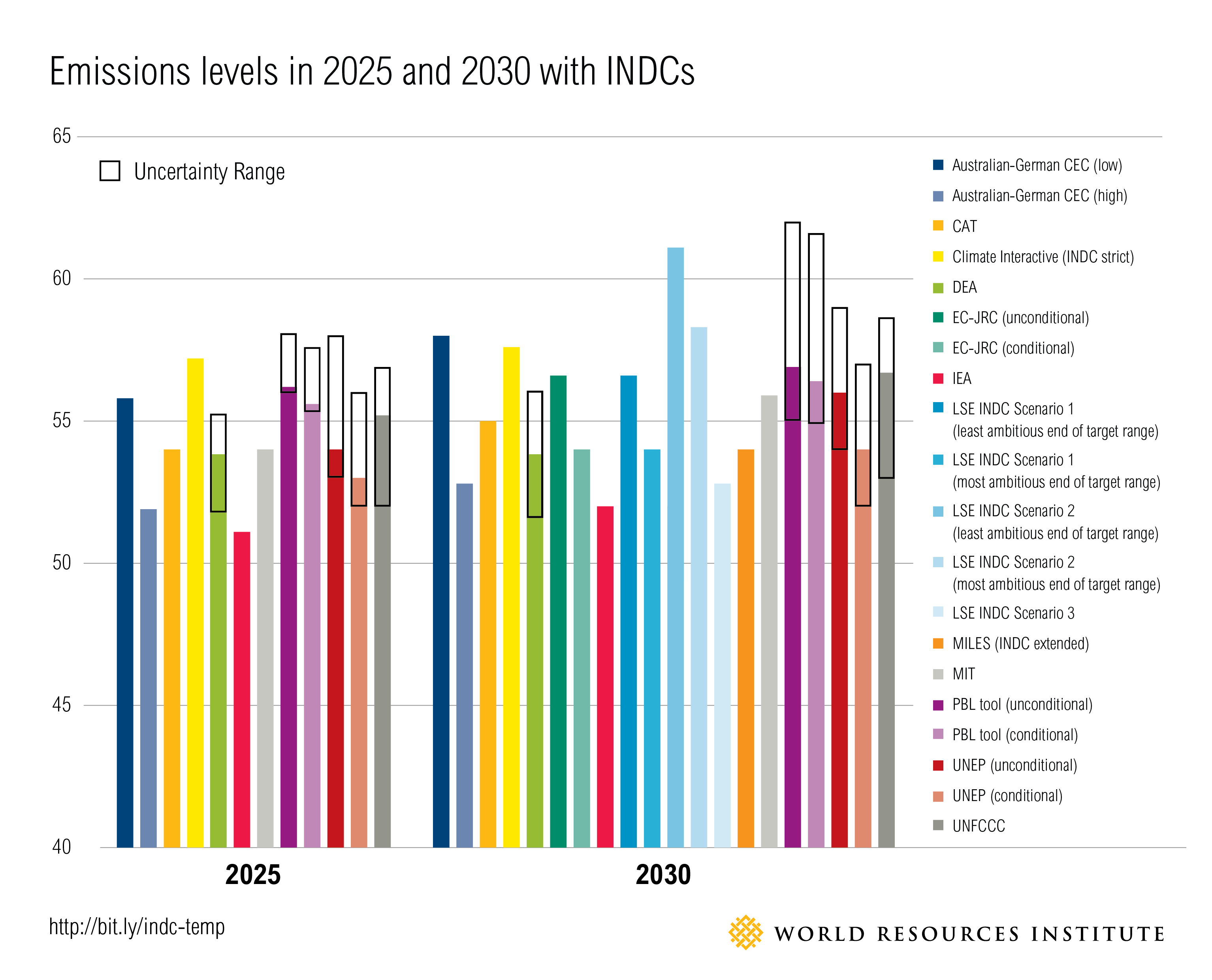 Why are these studies reaching different estimates?

There are a number of factors that can explain why studies estimate different temperature outcomes and emissions levels. For some countries, estimating future emissions is straightforward, and results in relatively little difference across studies (e.g. those countries that pledge to reduce economy-wide emissions relative to a past year’s emissions). For others, analysts have to make more assumptions (e.g. countries that pledge to reduce emissions per unit of GDP, without specifying expected future GDP growth). The emissions covered by INDCs are then aggregated with projected future emissions from countries, sectors and gases not covered by INDCs. The latter are taken from projections of what future emissions will be under “business as usual” or under current policies.

Three factors are largely responsible for these differences:

Depending on the timing of the analysis, the number of INDCs analyzed differs. For example, of the studies we looked at, the cut-off dates for including INDCs ranges from mid-August to the end of October 2015.

In addition, a number of countries attach conditions (such as international financing or other forms of support) to all or part of their INDCs. Some scenarios include unconditional pledges only, whereas others include both conditional and unconditional pledges. Moreover, some INDCs are not clear about the extent to which they are conditional; in these cases, studies may categorize the same pledge differently with respect to its conditionality.

Although the INDCs are more transparent than the Cancun pledges, the variation in studies’ results is in part due to the fact that some countries have not identified an expected emissions level in the future. This is particularly the case for targets that are framed as intensity targets or baseline scenario targets, where projected GDP or baseline scenario emissions are not specified, or targets that set a year to peak emissions and don't specify the peak emissions level.

For example, how China's emissions trajectory is treated will have a significant impact on global emissions and resulting temperature increase, given that it is responsible for 22% of global emissions. With the exact timing and level of emissions peak is not specified, studies are forced to make assumptions about China's future emissions levels. In addition, some studies examine China's intensity target only, while others also examine additional policies and technology transformation, which can lead to additional reductions. Furthermore, given that the Chinese INDC peak year target only covers carbon dioxide, analysts have to make assumptions about the growth rate of non-CO2 gases.

In addition, studies rely upon different data sources both for historical emissions as well as projected emissions (which is particularly relevant to the analysis of uncovered sectors and gases, as well as countries that have not submitted an INDC). Official data submitted by countries can vary from international data sources that are harmonized across countries. For instance, we found that 2010 emissions estimates used by various studies ranged from 47-49.5 Gt CO2e. In addition, studies use projections of emissions to estimate future emissions for those countries, sectors and gases not covered by an INDC. The difference between relying on “business as usual” projections versus current policy projections can be significant. Furthermore, some studies use IPCC Second Assessment Report global warming potential (GWP) values while others use Fourth Assessment Report, which can lead to differences in emissions estimates for non-CO2 gases.

Also, the way in which emissions reductions and enhanced sinks are accounted for can have an impact on future emissions levels. This is particularly the case for LULUCF accounting. Projections of future emissions and removals in the sector are extremely uncertain, and most countries did not specify their assumed accounting approaches or data sources. The DEA study, for example, finds that differences in accounting rules for LULUCF can increase the emissions gap in 2030 by around 0.8 to 3.4 GtCO2e.

Assumptions about what happens after the INDCs

One of the most significant factors is likely to be what the studies assume after the target year of the national climate plans, which determines the countries’ post-2025 or post-2030 emissions trajectory. For instance, do actions continue or end after the INDC is completed? Since most INDCs do not specify action after 2030, different scenarios reflect a broader range of assumptions, resulting in divergence in conclusions regarding post-2030 global emissions. The Climate Action Tracker assumes continued emissions reductions in future decades at a level of effort no more, or less, ambitious than that implied by the INDCs. Climate Interactive, on the other hand, assesses multiple scenarios, one in which there is no post-2030 action and several in which there is continued emissions reductions in certain countries to varying extents. The MIT study assumes the proposed cuts from the INDCs are extended through 2100, but not deepened further.

(Studies not listed do not extend past 2030)

In addition, other factors could make a difference, such as assumed implementation of the pledges, variations among the models themselves, treatment of accounting rules, and more.

The Potential of the Paris Agreement

The Paris Agreement can help bend the curve further before 2030 and ensure greater ambition after 2030 by including clear long-term and short-term signals, increasing transparency of INDCs and future cycles of commitments, and advancing accounting rules governed by strong principles. Additionally it can increase the probability of full implementation through strong provisions on capacity building, finance and technology transfer. In a little less than a month’s time, we have the opportunity to build upon the momentum unleashed by the INDCs and start to close the emissions gap to have a fighting chance of keeping global average temperature below 2 degrees C.