All eyes are on India this week, as President Obama is set to make an unprecedented second trip to meet with Prime Minister Narendra Modi. While the leaders’ discussions will address several issues, including nuclear energy and trade, climate and clean energy will be a central part of the agenda. So it’s a tremendous opportunity for the two countries to make substantive progress on shifting to low-carbon, climate-resilient pathways.

To put the countries’ relationship in context, however, it’s important to first understand the dimensions of India’s energy and climate situation.

India is the world’s third-largest emitter of greenhouse gases (behind the United States and China), and it’s expected to increase its use of coal to meet its energy needs. But India is quite different from the United States or China.

India’s current total emissions are one-fourth of China’s, and its per capita emissions—about 2 tons of greenhouse gases—are well below the world’s average and significantly less than those in China (8 tons per person) or the United States (20 tons per person). In addition, India’s cumulative emissions since 1990 are only 4 percent of the world total, far below China’s 14 percent and the United States’ 16 percent.

That isn’t to say that India shouldn’t play an important role in overcoming the global climate change challenge. Indeed, India presents some of the greatest opportunities to shift to low-carbon pathways in order to achieve economic benefits.

India’s Shift to a Low-Carbon Economy

Although India is an emerging economy, 300 million of its people still lack access to electricity. That’s roughly 25 percent of the population and nearly equivalent to the population of the United States. For many more Indians, energy supply remains infrequent and unreliable. India’s urbanization – with its cities’ population expected to rise from around 380 million to almost 600 million by 2030 – is also changing the social landscape and creating opportunities for new approaches to growth. Taking bold action to address electricity access and urbanization challenges can play a key role in advancing India’s economy and standard of living. 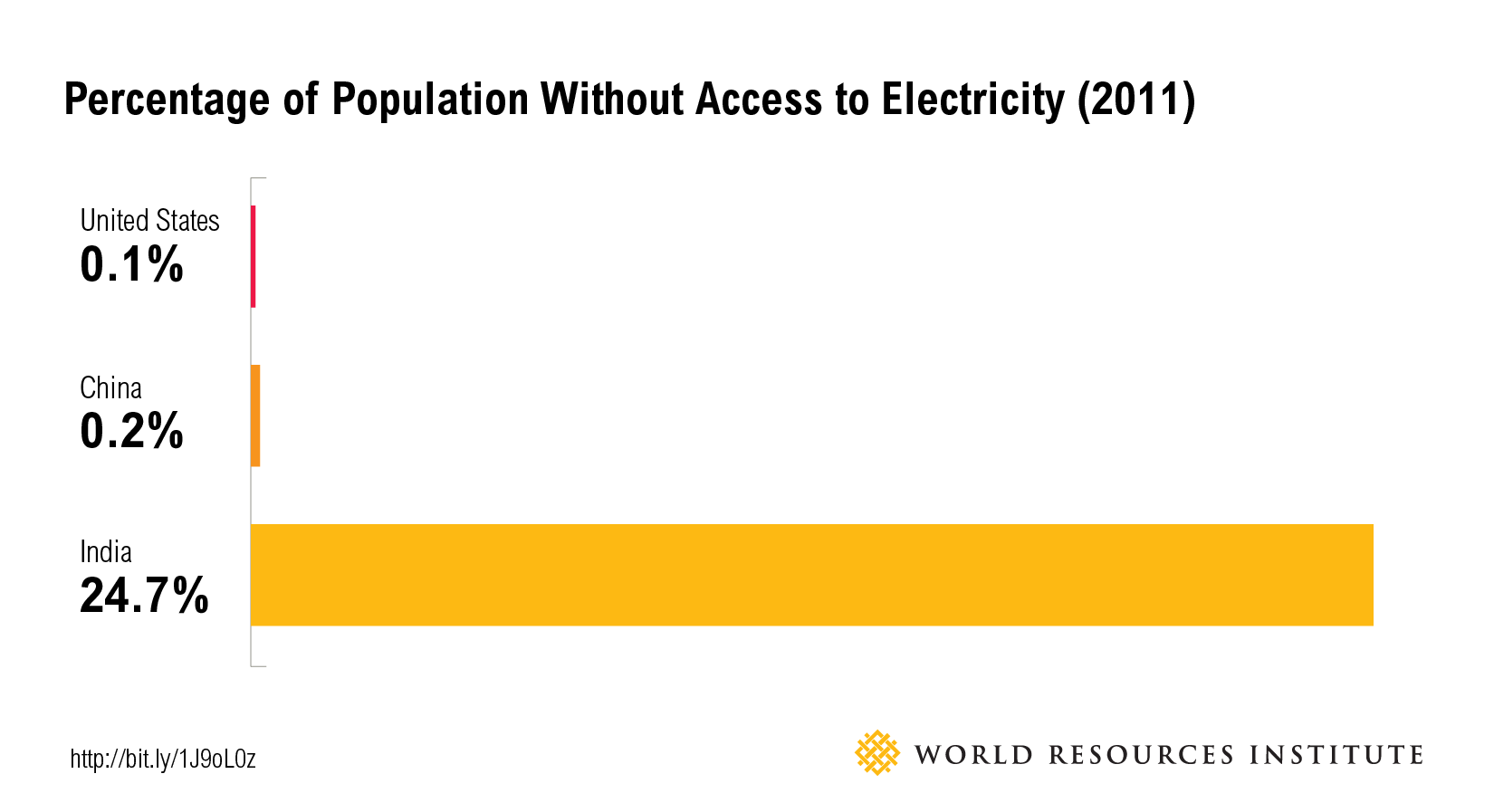 Prime Minister Modi’s new government appears to recognize these opportunities. The Indian government committed to provide 24-hour electricity to all Indians by 2019, with renewable energy providing some of the share. Last month, the government announced an exceptionally bold goal to increase solar power to 100 gigawatts (GW) by 2022—30 times the current level and five times above the previous renewable energy target. 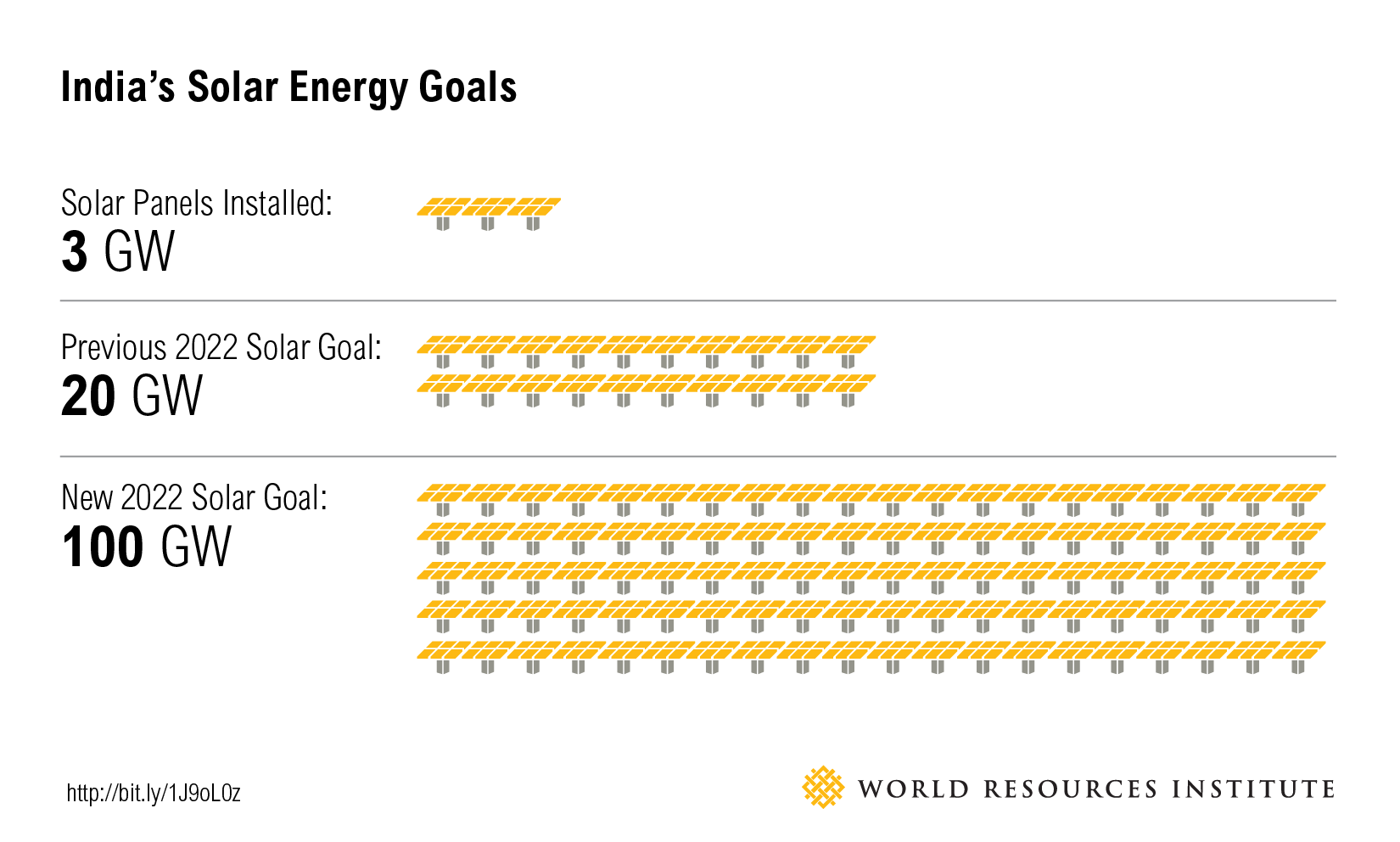 Estimates from KPMG and others show that solar energy in India may soon be as cheap as conventional energy sources, enabling a major expansion of reliable electricity. The government also announced that it intends to create new policy programs to enhance wind energy and deal with the health impacts of climate change.

With a commitment to create “100 smart cities” in India, Modi has also initiated a major new effort to improve urban growth and development across existing and new cities. Well-designed cities provide significant benefits that go beyond cleaner air and water. Research shows that if the world’s largest and fastest-growing cities adopted compact and connected rather than sprawled designs, they could save more than $3 trillion in the next 15 years.

Building the U.S.-India Relationship on Climate and Energy

India and the United States are already working together through programs such as the Partnership to Advance Clean Energy (PACE), and Obama and Modi announced additional collaboration during their meeting in Washington this past September. But they can go even further to secure economic growth and climate action. The two leaders can take four steps to build on existing cooperation:

First, the governments should work together to ensure that investment can flow to meet India’s ambitious renewable energy targets. A mutually beneficial approach would be to develop a long-term commercial strategy for resolving thorny issues such as requirements for domestically made solar panels and access for U.S.-made panels, in conjunction with a substantial increase in U.S. investment to help India reach its solar production goal. This kind of agreement would build on recent moves by the private sector, such as SunEdison's investment in a $4 billion solar manufacturing plant in India. Financial assistance from U.S. agencies like the Overseas Private Investment Corporation, Export-Import Bank, U.S. Agency for International Development and the Department of Energy could pave the way for such collaboration, which should extend to all renewable energy systems (not only solar) being embraced by the Modi government.

Second, going beyond bilateral efforts, the United States and India could agree to lead development of a global clean energy collaborative, a proposal first made by Modi during the recent G20 meeting. This collaborative could help build bridges among research institutes, mobilize new initiatives and resources, and foster greater access to clean energy technologies. For example, while many renewable energy technologies are already relatively well developed, others, such as battery storage for the energy produced by solar and wind sources, are ripe for research and development. The leaders could bring this collaborative to the G20 in November and make it a key component of the new international climate agreement to be concluded this December in Paris.

Third, the two countries could expand on their September commitment to create a partnership to build resilience to climate change. The Modi government has already taken a first step in creating an adaptation fund (albeit small) to enable states and institutions to develop practical ways of implementing adaptation programs. An important step would be to launch a major initiative on ensuring universal access to data and information on the impacts of a warmer world. This information should be easily usable by citizens, such as bringing important technology like weather and water gauges to India’s rural communities. The initiative could take advantage of both countries’ exceptional information technology capacity and build on work the United States is already doing with Google to make climate information more accessible, benefiting not only both countries, but also providing a global public good.

Finally, to help spur success in negotiating a new international climate agreement in Paris in December 2015, the two leaders should create an open, direct line of communication between the countries’ highest levels of government. This could be particularly important during the final stages of the Paris meeting, when key decisions about country actions and the overall agreement will be made.

Advancing cleaner, low-carbon and climate-resilient pathways can create more vibrant economies in both India and the United States. The moment to do it together is in front of them.