Today is World Food Day, an annual commemoration of the creation of the UN Food and Agriculture Organization (FAO). It’s not just an acknowledgment of the beginning of this important institution, however. World Food Day gives people everywhere an opportunity to take a close look at our global food system and see what’s working, what’s not, and what needs to change to create a truly sustainable food future.

Much of the emphasis around feeding the world tends to focus around increasing food production and growing more with less. But just as important – and often left out of the conversation – is how we treat what’s already been produced. In other words, how we deal with the world’s food loss and waste.

Food Loss and Waste Is a Global Problem

Globally, according to WRI analysis, about 24 percent of all the calories produced for human consumption don’t actually end up reaching human mouths. As the chart below shows, this happens throughout the value chain, from farm to fork, and in all parts of the world.

Food Lost or Wasted by Region and Stage in Food Chain, 2009 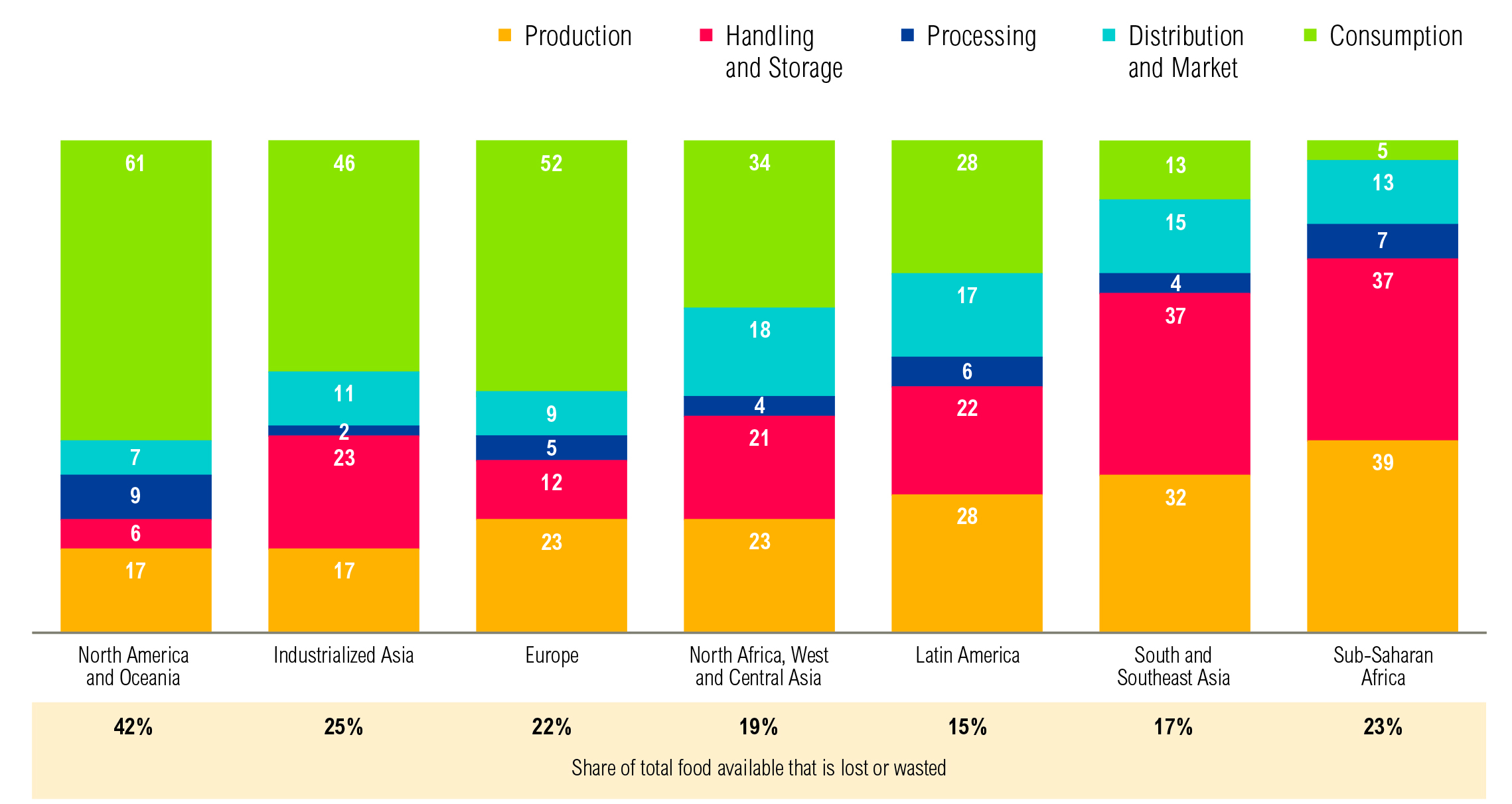 This chart looks at where kilocalories (kcal) are lost and wasted along the food chain in different regions.

In some regions, like sub-Saharan Africa, the problem is much more on the production side. Food tends to be lost in fields or in storage, due to factors such as inclement weather, pests, and inaccessibility of markets. In regions like North America, much more food is lost at the consumption end of the value chain, due to factors such as food spoiling before being eaten, improper preparation, or people simply throwing out what they don’t eat.

This big inefficiency suggests a big opportunity, however. According to WRI analysis, the world will need to produce about 69 percent more calories in 2050 than it did in 2006 to feed a projected 9.6 billion people. Cutting current rates of food loss and waste in half would close this calorie gap by roughly 20 percent. That’s one-fifth of the way there without producing any new food!

One Solution: A Food Loss and Waste Protocol

One way that WRI is going about working on reducing food loss and waste is through the development of the Food Loss & Waste (FLW) Protocol. The FLW Protocol is a multi-stakeholder effort led by WRI and a Steering Committee of some of the world’s foremost organizations addressing food loss and waste, including FAO, United Nations Environment Programme, the World Business Council for Sustainable Development, the Consumer Goods Forum, WRAP, and EU FUSIONS. The goal is to develop a global accounting and reporting standard for food loss, waste, and the inedible parts of food (like bones and pits).

This is based on the idea that what gets measured gets managed. How can a company or a country cut its food loss and waste if it doesn’t know how much food is being wasted to begin with? The FLW Protocol will provide the tools and methods necessary to measure loss and waste, which can then spur the action necessary to help more food reach the people who need it.

We’ve already made a lot of progress. Two Technical Working Groups comprised of experts from all over the world have been working throughout the year on the methods that will go into the FLW Protocol. Next, in 2015, road testers will review and test the methodology before its publication in the Fall of that year.

More than 300 people have been involved in this process so far, and we hope you’ll join us, too – visit our web page to learn more about how to do so.