Local communities are key to protecting the world’s last remaining forests. Indigenous peoples and local communities hold legal or official rights to one-eighth of the world’s forests, about 513 million hectares (1.3 billion acres). A recent report by WRI and the Rights and Resources Initiative found lower rates of deforestation where governments protect communities’ rights.

Researchers used Global Forest Watch, an online forest monitoring system, to visualize how tree cover is changing in and around lands managed by local communities. Through maps, we can see how local communities can be key conservationists, helping to protect forests and reduce greenhouse gas emissions from deforestation.

Brazil is home to the most extensive tropical rainforests on Earth. Despite a history of high levels of deforestation, Brazil has reduced forest loss by 70 percent per year since 2004, in part due to efforts to legally recognize and protect Indigenous Lands and enforce the law. Importantly, many of Brazil’s remaining well-conserved forest ecosystems are managed by communities.

WRI analysis using satellite data and maps from the Brazilian National Indian Foundation found that from 2000 to 2012, tree cover loss inside Brazil’s Indigenous Lands of the Amazon Basin totaled only 0.6 percent, compared with 7.0 percent in areas outside those lands. The map above shows the boundaries of Indigenous Lands in the Brazilian states of Rondônia and Mato Grosso, and satellite detection of tree cover loss. The loss concentrates around, but rarely inside, Indigenous Lands. Notably, one of these areas is home to the Paiter-Surui, the first indigenous tribe to successfully sell carbon credits for protecting forests on their land.

Situated along the Central American isthmus connecting North and South America, Panama serves as a critical biological corridor and is home to tens of thousands of plant and animal species. And although indigenous peoples represent only 12 percent of the total population of Panama, indigenous territories (or comarcas) cover 31.6 percent of Panama’s land area and contain 54 percent of Panama’s mature and primary forests. As the map above confirms, the five indigenous comarcas in Panama exhibit lower rates of tree cover loss than other forested areas and contain many of the country’s Intact Forest Landscapes.

The government has begun exploring options to protect these forests through REDD+ programs, or Reducing Emissions from Deforestation and Forest Degradation. Indigenous peoples play a central role in these partnerships, but some indigenous groups have expressed concerns that their rights would be weakened by REDD. UN-REDD responded to these concerns by re-affirming a rights-based approach that would strengthen local forest rights while preventing deforestation.

WRI and RRI’s recent report recommends that “Governments, donors, and civil society should help ensure that people and local communities are able to participate genuinely in the development of legal and policy frameworks related to REDD+.” 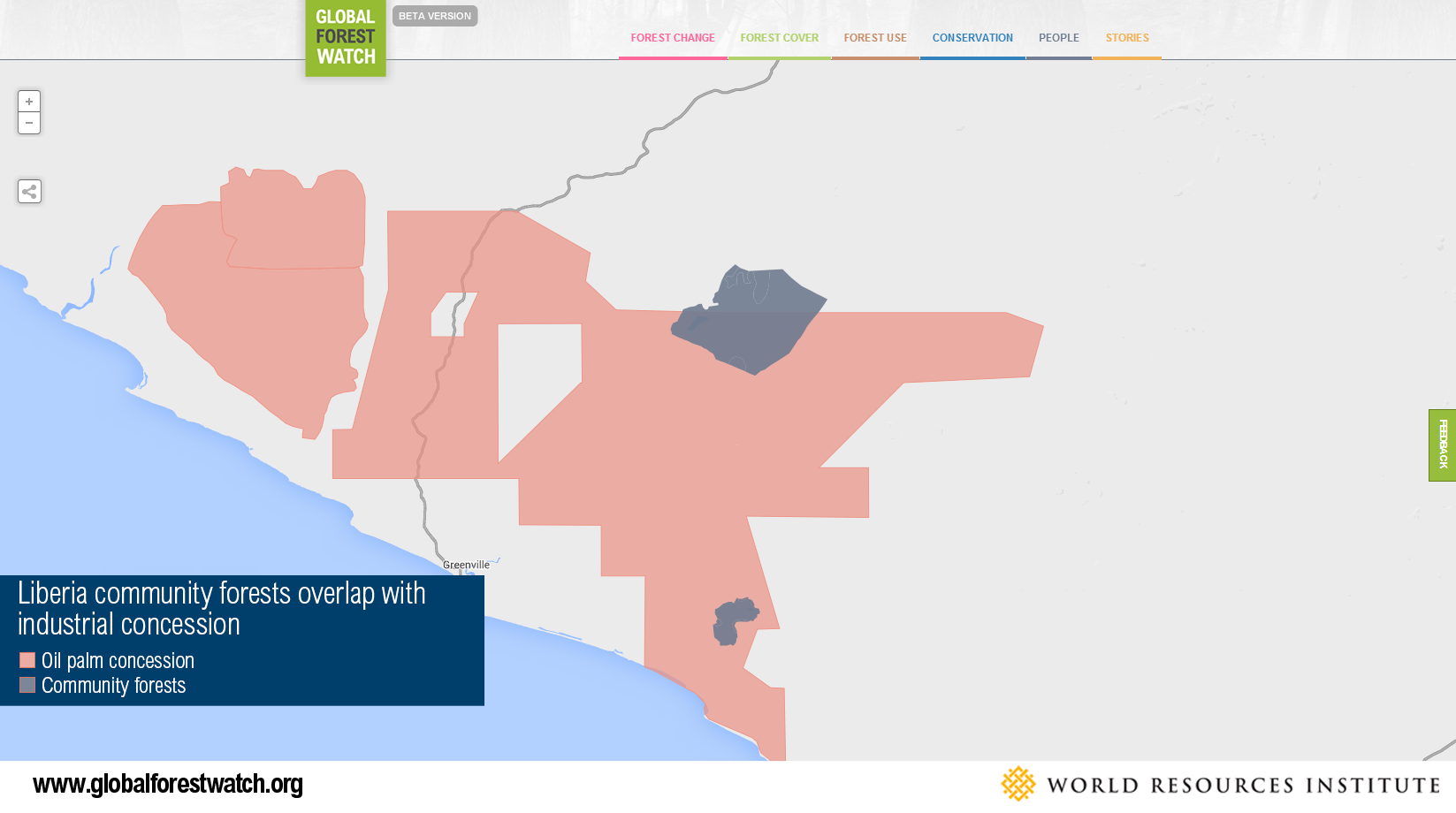 Global Forest Watch paints a troubling picture of some countries where government actions undermine community rights. One such example is Liberia. More than one-third of this heavily forested country is currently allocated or identified by the government for commercial plantation development and industrial logging, primarily by foreign or foreign-financed companies.

The map above shows overlapping land rights and a palm oil concession held by Golden Veroleum (GVL), a large palm oil company whose sole investor is Singapore-based Golden Agri-Resources (GAR), and two community forests established under the Liberian Community Rights Law. Despite communities’ legal ownership of these forests, the government allocated land within these forests to palm oil companies. This operation threatens forests that communities rely on for their livelihoods.

Although the company carried out a social and environmental impacts assessment required by Liberian law, the operation caused significant conflict in surrounding communities. In 2012, several Liberian communities released a joint declaration claiming that they were not consulted prior to the government’s leasing of their lands, nor were they consulted by the company as it planned development. Community groups also filed an official complaint with the Roundtable on Sustainable Palm Oil (RSPO), a multi-stakeholder palm oil certification body of which both GVL and GAR are members, stating that the company was not complying with environmental and social commitments required under RSPO.

Following that complaint, an independent investigation confirmed the allegations and recommended measures that Golden Veroleum should take to improve community engagement and comply with their commitments. After the reports, the company has worked to better engage affected communities and reduce their ecological impact, including through participatory mapping. The situation is complex and ongoing, but it illustrates that forest communities are important stakeholders who should be active participants in land and natural resource allocation that affects their lives and forests.

Communities are often important allies in efforts to conserve and manage forests, but collecting accurate geospatial data on the location and extent of community land and resource rights remains a challenge in many countries. This lack of information makes it difficult for communities and other stakeholders to sound the alarm when illegal incursion occurs. Global Forest Watch, in partnership with WRI’s Land and Resource Rights project, is dedicated to putting indigenous peoples and local communities “on the map” in order to strengthen rights and protect forests.