Deforestation and other land changes produce about 11 percent of all greenhouse gas emissions globally. A new report reveals an undervalued and often-overlooked strategy for curbing these emissions—strengthening the rights of forest communities.

Governments around the world legally recognize at least 513 million hectares of community forests, land held collectively by either rural populations or Indigenous Peoples. This area stores about 37 billion tonnes of carbon—29 times the annual carbon footprint of all the passenger vehicles in the world. Securing Rights, Combating Climate Change, a new report from WRI and the Rights and Resources Initiative, shows that by protecting and expanding the amount of officially recognized community forests, national governments can meet their climate goals while also improving citizens’ livelihoods.

A Look at Community Forests Around the World

Community forests are lands held collectively by either rural communities or Indigenous Peoples based on a shared history, language, culture, or lineage. Some community forests are legally held and officially recognized by governments, while others are held based on custom only, often with no legal recognition or government protection. This lack of legally recognized rights leaves communities vulnerable to losing their land to settlers, cattle ranchers, illegal loggers, or companies—and it leaves forests vulnerable to being cut down.

Governments that do legally recognize and help protect community forests, however, are seeing significant benefits. The report shows that such community forests tend to be more carbon-rich than other forests—so recognizing and enforcing the legal rights of forest communities presents an enormous opportunity to fight climate change. Here’s a look at the carbon-storage potential in legally recognized forests in Latin America, Africa, and Asia: 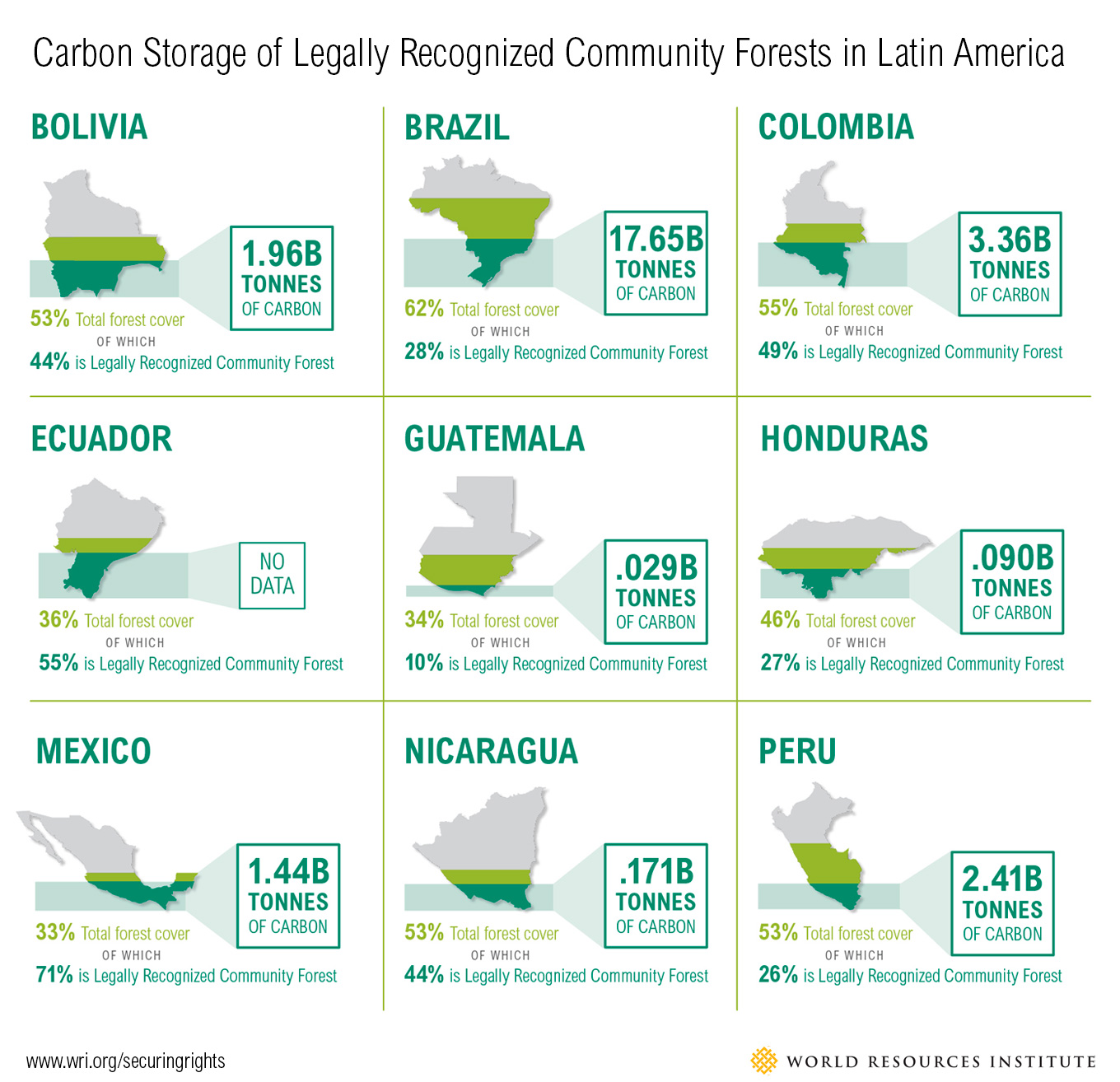 In many countries in Latin America, rural communities and Indigenous Peoples have spent decades fighting for legal recognition of their forest rights. Brazil, Bolivia, Guatemala, and Mexico offer strong forest rights and significant areas of legally recognized community forests—areas that sequester considerable amounts of carbon. For example, the Carmelita community in the Guatemala Maya Biosphere Reserve sustainably manages its legally recognized forest, harvesting timber and non-timber products that generate thousands of U.S. dollars in monthly income for the community.

However, in other Latin American countries, such as Colombia, Ecuador, Honduras, Nicaragua, and Peru, rights are weaker. While national laws recognize communities’ rights to their forests, government agencies undermine those rights by failing to expel illegal settlers and loggers or allocating community forests for mining and hydrocarbon extraction. So while these community forests store significant carbon, they could store even more with stronger rights that limit deforestation and degradation.

Most forests in Africa are still claimed by governments despite the reality that many forests are held by communities under long-established customs and traditions. In Tanzania and Niger, where governments recognize community forest rights, the carbon dividends have been substantial. Thanks to increased forest rights in Niger, farmers added 200 million trees to the landscape over the past 20 years, which store 30 million tonnes of carbon.

In Nepal, 32 percent of the population benefits from community forestry. It’s one of the country’s most important poverty-reduction programs, improving the conditions of forests, curbing climate change, and providing increased economic benefits to communities. By contrast, in Indonesia and Papua New Guinea, the government routinely allocates community forest for use as palm oil plantations, mining, and other conflicting land uses. 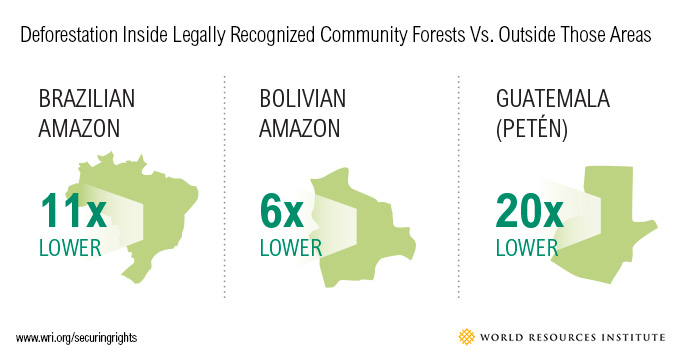 Local communities and Indigenous Peoples tend to be better protectors of forests than companies, large-scale farmers, and even government agencies. Communities have a vested interest in sustainably managing their forests, as they rely on them for food, medicines, building materials, products to sell, and other services. That’s why deforestation rates in community forests are so much lower than in forests managed by other entities. For example, much unlike forest in the surrounding areas, the Gaviões Indigenous People in the Brazilian Amazon largely prevent deforestation on their land because they have strong rights and are vigilant in the protection of their forest land boundaries.

Strengthening community forest rights is not just a land and resource problem—it is a climate change problem. As governments, NGOs, and other stakeholders work to reduce emissions from deforestation, it’s important that they recognize a win-win solution—empowering the local communities who call the forests home.