Leaders from government, civil society, and business will come together in New York next week to address one of the most significant threats the world faces—climate change. Among the many policy options bandied about, one that deserves recognition is strengthening community forest rights. Recent research from WRI and the Rights and Resources Initiative found that the world’s 513 million hectares of legally recognized community forests store 37 billion tonnes of carbon—29 times the annual carbon footprint of the world’s passenger vehicles.

However, it’s not enough to just legally recognize Indigenous Peoples’ forest rights—governments must also protect these rights from industries and other interests. The impacts of oil extraction in Ecuador illustrate why secure community forest rights are necessary to protect both livelihoods and the environment. 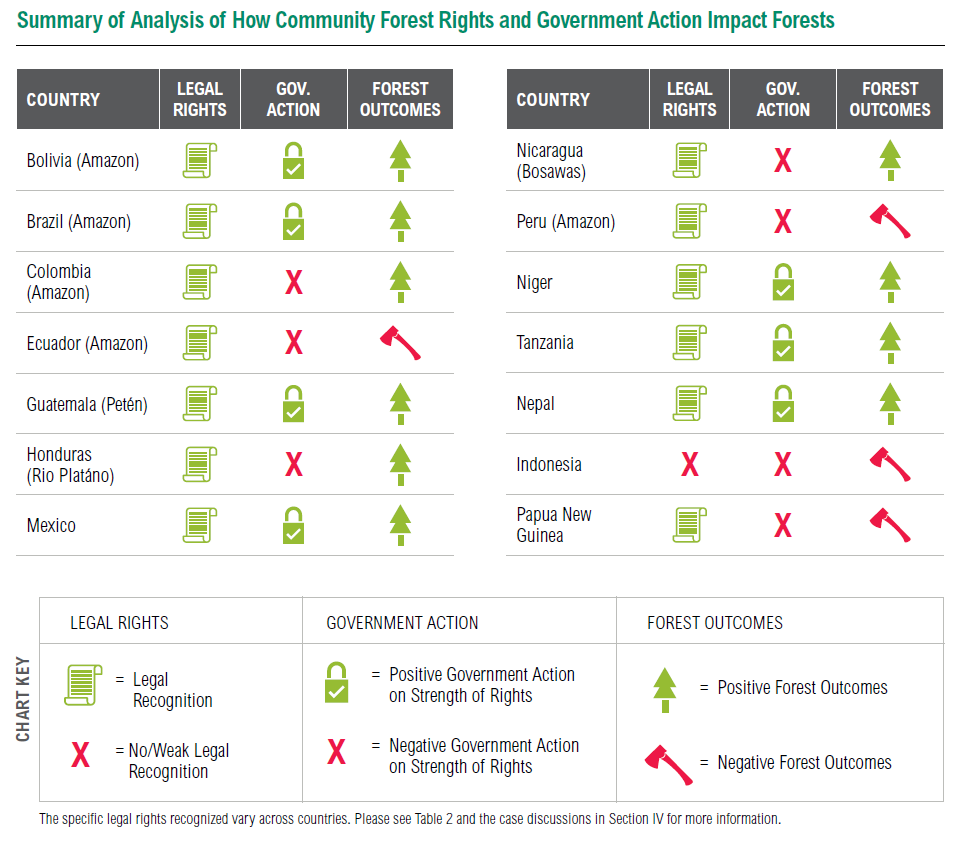 A Snapshot of Ecuador’s Forests

Roughly 39 percent of Ecuador’s greenhouse gas emissions come from deforestation and other land use changes, thanks in large part to oil extraction. Much of this tree cover loss occurs in the Ecuadorian Amazon, home to Indigenous Peoples and other local communities. 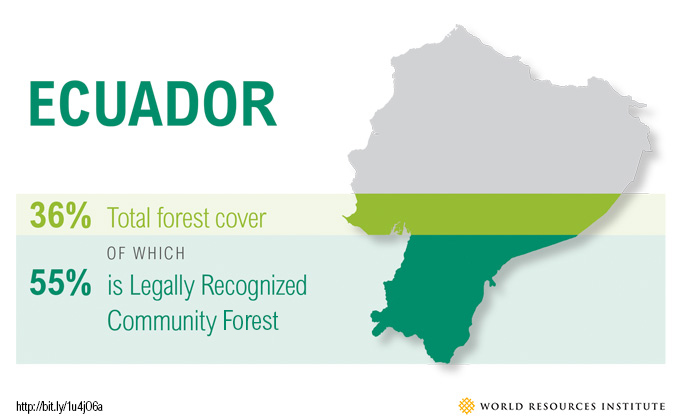 Ecuador’s 2008 Constitution designates more than half of the country’s forest land as community forests, or “Indigenous Territories.” These communities are legally entitled to utilize timber, food, and other forest products, as well as to exclude outsiders from their traditional lands.

The problem is that the Government of Ecuador maintains all subsurface rights to these forested areas, often opening up the land to hydrocarbon development. In short, even with legal recognition, indigenous peoples’ forest rights are weak, threatening the forest ecosystems they call home.

Ecuador’s Northern Amazon showcases what can happen when governments give extractive industries rights to community forests. Oil was first discovered in the region at the end of the 1960s, and the area has been exploited ever since. Even Protected Areas—which limit communities’ rights to use forests—may be subject to oil drilling if the National Legislature declares extraction a matter of “national interest.” The below map of Indigenous Territories in the Northeastern province of Orellana shows deforestation from 2000 to 2012 for Indigenous Territories, both inside and outside Protected Areas.

From 2000 to 2008, Indigenous Territories in Orellana and neighboring Sucumbíos that do not overlap with Government Protected Areas suffered some of the highest deforestation rates in the country, losing 6.5 percent of their forest—an area about half the size of New York City. Oil operations—and the roads and settlers they bring with them—were largely to blame.

Unlike the Northern Amazon, forests in the Southern Amazonian provinces of Pastaza and Morona Santiago are still largely undisturbed, with 50 percent of their forests still intact. These regions are home to several Indigenous Peoples, such as the Shuar, Achuar, Kichwa, Shiwiar, Andoa, and Sápara—communities with a long history of protecting and sustainably managing their forests.

Without government intervention, however, Southern Ecuador seems poised to meet the same fate as its Northern counterpart. The Ministry of Non-Renewable Natural Resources is currently auctioning off oil blocks in the area to companies. Drilling and oil spills could not only deforest the area, it could also contaminate soil and water, as has been the case in the Northern Amazon.

At the same time, the Government of Ecuador is beginning to invest in supporting communities for sustainable management of their forests as a way to mitigate climate change. Its Socio Bosque (Forest Partner) program, launched in 2008, provides yearly payments to Indigenous Peoples, local communities, and individual households who protect their forests. About 88 percent of the lands covered by the program are owned by Indigenous Peoples, and its priority areas contain about 62 percent of Ecuador’s carbon stored in trees and other biomass. The program covers more than 1.3 million hectares and has more than 170,000 beneficiaries across Ecuador earning US$11 million annually.

The program is an encouraging move toward empowering indigenous communities and mitigating climate change, but it’s clear that policymakers must go further. Socio Bosque provides no clear rules on protecting forests from oil operations, leaving them vulnerable to the same exploitation happening in community forests outside the program.

The Government needs to protect the Socio Bosque conservation areas as well as the other indigenous territories from hydrocarbon concessions. The current legal framework simply does not provide for this. Clear regulation and procedures are needed to ensure Indigenous Peoples’ rights are respected. Increasing government support to secure rights in Indigenous community forests is critical—not only to reduce carbon dioxide emissions from deforestation, but also to protect biodiversity, cultures, and human well-being.