The Long March was a watershed moment in Chinese history—the moment Mao Zedong’s nascent Communist Party escaped disaster in 1934 en route to forming a new nation. Fast forward 80 years, and China is poised to embark on a new Long March – but this time away from climate change and environmental damage toward a sustainable future.

China’s economic growth is unprecedented in modern history, and it may become the world’s largest economy by 2020. But that growth has come with a steep price tag: It’s the world’s largest greenhouse gas emitter, contributing to global warming and creating choking smog across the country.

In March 2014, Chinese Premier Li Keqiang declared war on pollution in response to China’s ongoing environmental crisis. The government’s new campaign builds upon several years of escalating energy and pollution initiatives such as the 12th Five-Year Plan and the Action Plan on Prevention and Control of Air Pollution announced by the Xi government in 2013.

Since the founding of the People’s Republic of China in 1949, five-year plans have served as the primary vehicle for domestic policy, and the current environmental push follows suit. The 12th Five-Year Plan’s energy and climate efforts center on four goals:

As China’s pollution has worsened, the government has built on the 12th Five-Year Plan with ambitious 2017 targets in the Action Plan on Prevention and Control of Air Pollution, publicly identified New Energy Cities and New Energy Industrial Parks, city- and province-level caps on coal use, and a newly revised Environmental Law to take effect in January 2015.

Just this month the Legislative Affairs Office of China’s State Council took a page from the U.S. EPA’s playbook by releasing an amended national Air Pollution Prevention and Control Law for public comment. Xie Zhenhua, the Vice Chairman of the National Development and Reform Commission, went a step further on September 19 when he announced a new National Plan on Climate Change (2014-2020). These new policies have been buttressed with water use targets such as the “three red lines,” water price reforms, and international technology collaboration programs.

At the midpoint of its multi-year targets and programs, mixed implementation outcomes trail China’s new Long March to a sustainable economy. The 12th Five Year Plan targets are a case in point: China is reducing its energy and carbon intensity of gross domestic product, but total national energy use has grown at a rate that could exceed the 2015 target.

On its non-fossil energy target, the total share reached 10 percent in 2013 (up from 9 percent in 2010 and compared to 8 percent in India in 2013). Two additional considerations for midterm assessment are that performance varies geographically and initial 2014 data indicate accelerated progress, which would be consistent with the 11th Five-Year Plan in the sense that most progress was made toward the end of the period.

Energy investment, production, and air pollution outcomes are similarly mixed. On one hand, China invested more than any other country in renewable energy and installed a record 12 gigawatts of new solar electricity capacity in 2013. But on the other hand, the transition away from coal has been complicated by a second reduction of domestic shale gas production targets this year and water stress in areas with shale resources.

Two unequivocally positive developments have been increased transparency on air pollution (e.g., published daily PM2.5 concentrations and the release of the new air pollution law for public comment) and the new regional (as opposed to province-level) approach to environmental policy. 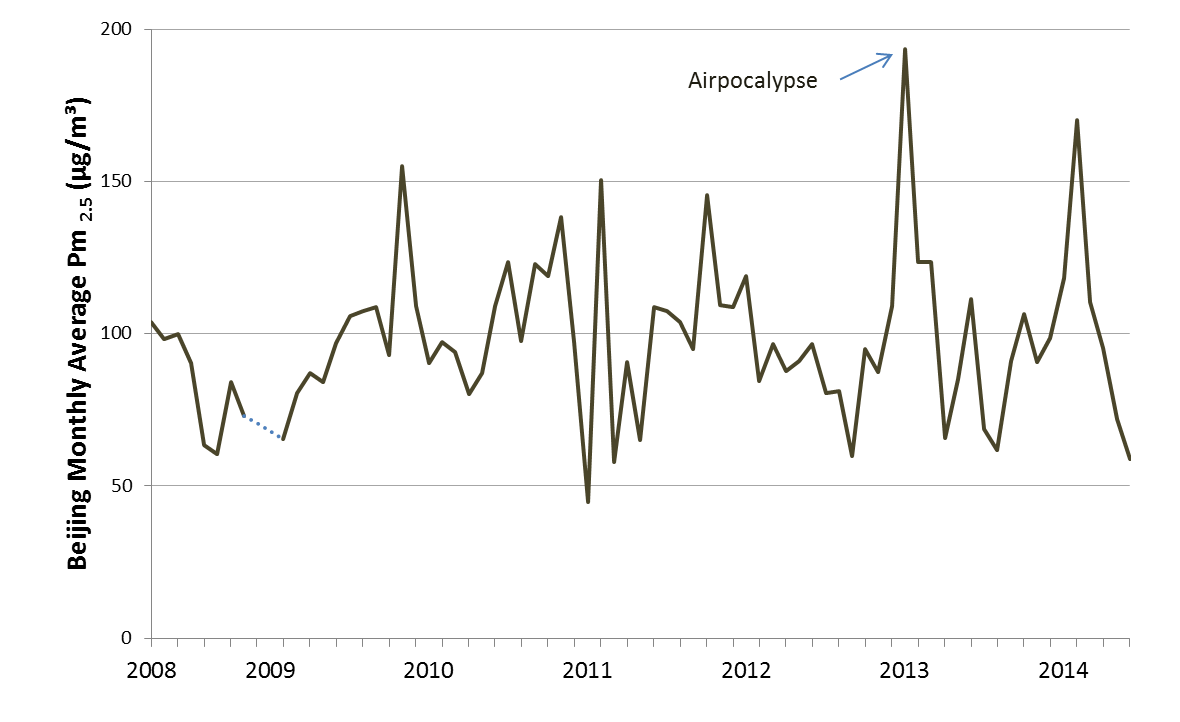 Source: U.S. Embassy Beijing. *Note: These data have not been fully validated are included here as an indicator; figure covers published observations through June 2014.

In Beijing, the average monthly concentration of PM2.5 dropped 11 percent between the first six months of 2013 and the same period in 2014. Air pollution levels have remained below the 2013 Airpocalypse levels, but they are still well above the 35 µg/m³ National Ambient Air Quality Standard established in 2012. As with other energy and environmental goals, China’s air pollution progress has been characterized by ambitious new policies, progress, and remaining questions on implementation.

Opportunities to Move Toward a New Climate Economy

Beyond particular policy issues, the upcoming UN Climate Summits in New York, Lima, and Paris present an opportunity for China to advance its new Long March through a systematic approach linking air pollution, GHGs, energy, water, and the economy.

By moving from administrative mechanisms (e.g., “strike hard” enforcement tactics) to regulatory, market, and institutional approaches, Chinese policymakers could help the country achieve its economic and environmental goals more effectively. The September Climate Summit is an opportunity to highlight new pathways for China and the world to achieve a prosperous new climate economy.