The “People-oriented Cities” series—exclusive to TheCityFix and Insights—is an exploration of how cities can grow to become more sustainable and livable through transit-oriented development (TOD). The nine-part series will address different urban design techniques and trends that reorient cities around people rather than cars.

Mumbai, India can be a commuter’s nightmare. Downtown sits a full 10 miles from the residential core, and the two areas are poorly linked by public transport. Mumbaikars have the longest commute of any Indian city resident, averaging more than 47 minutes each way every day. This fragmented urban development has pushed car ownership in the city to rise by an astonishing 3,700 percent in the past 60 years, clogging roadways and polluting the air.

Travel to New York City and the landscape is much different. A single city block houses a mix of restaurants, office buildings, residences, and shops. This type of development—known as “mixed-use development”—makes it easy to use public transport, walk, or bike, helping to efficiently connect the city’s neighborhoods through sustainable transport. The portion of commuters relying on cars in the city fell from 90 percent to 59 percent between 2010 and 2011.

Sprawling and Segregated: The Cost of Disconnected Cities

The proliferation of zoning at the beginning of the 20th century contributed to sprawling cities around the world. Residential neighborhoods sprouted on the urban periphery and in suburbs, giving rise to car-dependent commuter towns. City centers languished, shopping malls replaced commercial streets, and the urban poor were segregated from the wealthy elite.

These sprawling cities are increasingly common in developing nations. For example, Mexico’s history of dispersion created thousands of single-family houses on the outskirts of cities. The sheer distance to everyday destinations means some families spend 25 percent of their income on transport. This type of design increased Mexico City’s greenhouse gas (GHG) emissions by up to 70 percent and costs USD 2.5 billion (33 billion pesos) each year in lost economic productivity.

Mixed-use development works against these trends to create inclusive, connected communities. In mixed-use areas, you can find housing, restaurants, services, schools, cultural facilities, parks, and more. This connectivity reduces the need for private vehicles, thus increasing the viability of public transport, walking, and bicycling. For example, Mexico City’s longest street, Avenida Insurgentes, is home to a range of services, residences, and businesses, but traffic congestion initially made the street difficult to access. For these reasons, local decision-makers chose Insurgentes as the site for the city’s first bus rapid transit (BRT) system, Metrobús. After the launch of Metrobús in 2005, 100,000 daily car trips were replaced by sustainable transport, easing congestion and reducing the city’s GHG emissions by hundreds of thousands of tons. 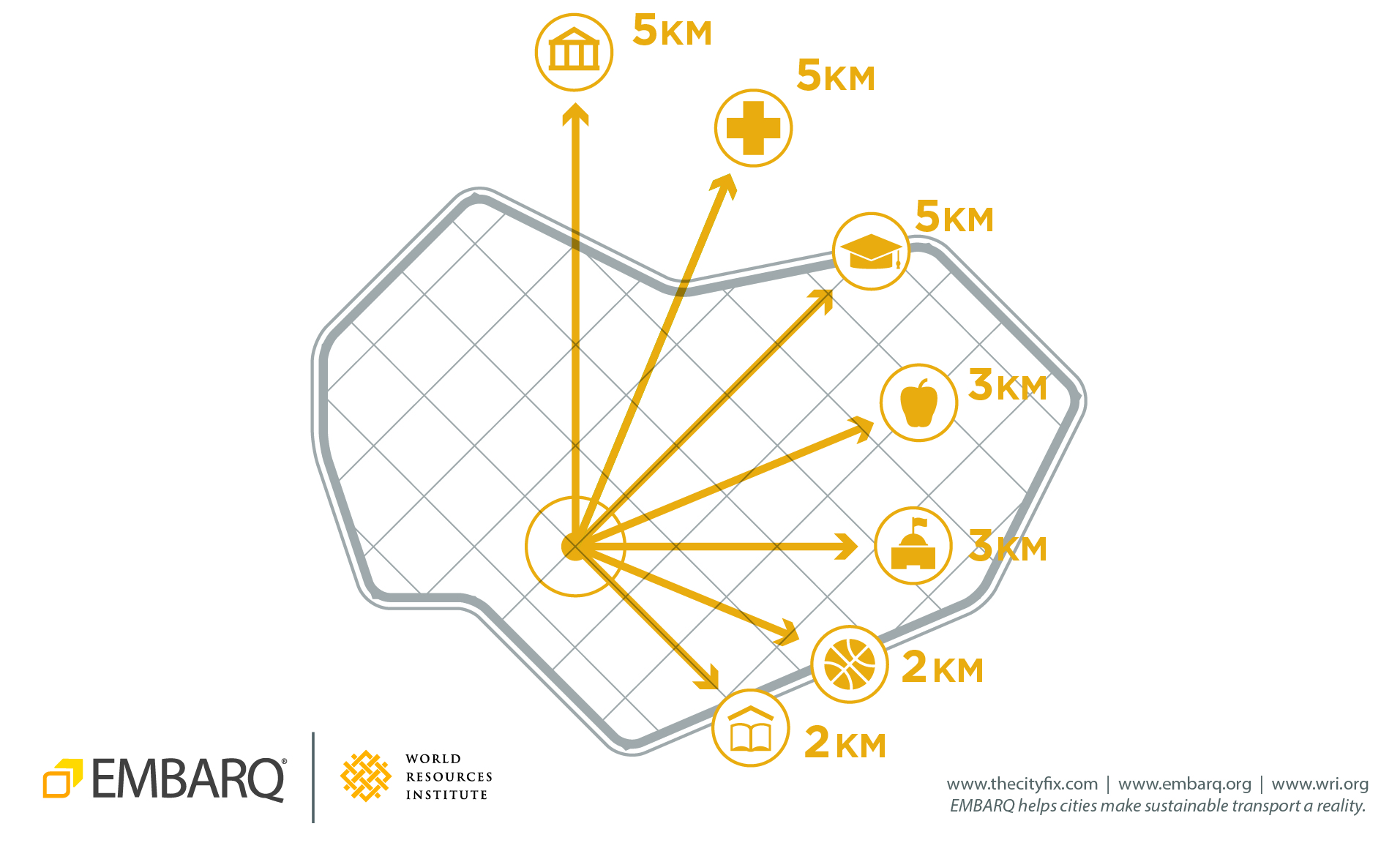 Everyday needs should be close enough to residential neighborhoods that they can be reached by walking, bicycling, or public transport. Photo Credit: EMBARQ.

By reducing the need for vehicle travel, mixed-use development also brings shared community space. Plazas, parks, and sidewalks foster interaction among community members—interaction that wouldn’t be safe or possible under a sprawled, car-centric design model. One landmark study of San Francisco compared three neighborhoods identical except for the levels of vehicle traffic on their streets. It revealed that residents of the neighborhood with the lowest level of car traffic had three times as many friends and twice as many acquaintances as their more heavily trafficked counterparts.

Finally, mixed-use, public transit-friendly neighborhoods benefit local economies. They save individuals money on transportation by reducing the length and number of everyday trips and eliminating the need for car ownership. Mixed-use development also supports local businesses by increasing foot traffic. Transport for London found that pedestrians spend up to 60 percent more money at businesses each month than those traveling by car, while spending less on transportation. Combining mixed-use development with pedestrianization—or closing some areas to cars to promote more walking—reinforces these benefits.

According to the World Health Organization, cities will hold 70 percent of the world’s population by 2050. About 96 percent of this growth will occur in developing countries, demanding quality urban spaces and services. As current cities expand and new ones crop up, it’s important for local leaders, urban planners, and citizens to examine what works. Compact, car-light cities spur economic growth, social cohesion, and quality of life.

LEARN MORE: Stay tuned for the next entry in the “People-oriented Cities” series, which will address vehicle-demand management. For more on sustainable cities and the transit-oriented development paradigm, download EMBARQ’s Transit-oriented Development Guide for Urban Communities.