Dried-out fields and dwindling reservoirs are becoming all too common across the United States, as companies, farms, and municipalities stagger along under years’ long droughts. Worsening dry conditions now affect two-thirds of Texas. California’s historic drought shows no signs of improvement. Exceptional to moderate drought conditions extend in pockets from Oklahoma north through Minnesota. And in Colorado, The Denver Post wrote, “comparisons to the Dust Bowl are no longer hyperbole — they're accurate.”

Years of Living Dangerously, a new Showtime series about climate change, turned its lens on how drought devastated the small town of Plainview, Texas in its first episode, which aired last night. Drought drove a Cargill beef-processing plant – Plainview’s largest employer – to close in 2013. More than 2,000 jobs disappeared in a town of 22,000.

In Plainview—and every other drought-stricken place across the United States—a precipitous drop in rainfall is only part of a much broader story. Underlying water stress is one important piece of that complicated puzzle. When drought strikes where baseline water stress is high, it exacerbates regions’ water woes. 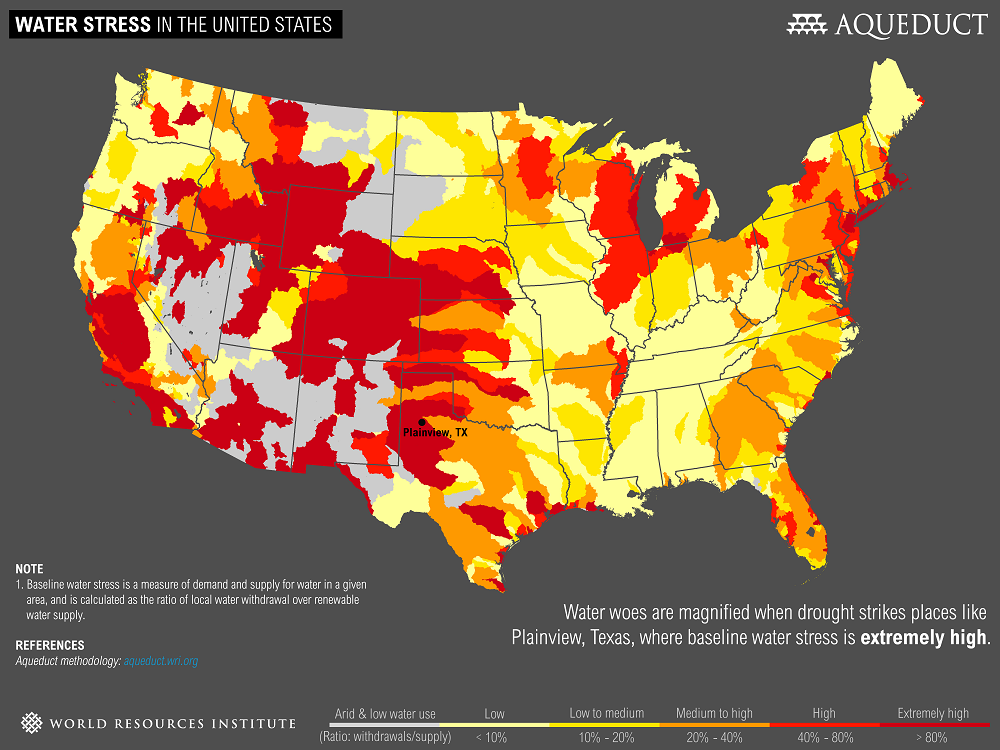 As drought withered once-rich grazing lands and increased feed prices across Texas, ranchers had to sell their herds to stay in business. The state’s cattle herds are now at their lowest level in half a century, the Showtime episode explained. That meant less business for Cargill.

The company’s now-shuttered Plainview plant sits within the Brazos River basin. The Brazos is the longest river in Texas—and what the show didn’t mention is that the river is also extremely water-stressed.

All users in the basin, therefore, compete for limited resources. So even in non-drought conditions, Plainview and the surrounding area would have cause for concern. While infrastructure and management interventions—such as water reuse systems—can help improve water access in the area, the fundamental reality is that all users are extremely vulnerable to changes in available supply, such as those that occur during drought.

Plainview’s plight is emblematic of a broad, national trend. Drought and water stress overlap in many regions facing water shortages in the United States. The Aqueduct project shows that 66 percent of California’s irrigated agriculture is exposed to extremely high water stress. Two of the United States’ largest river basins also face extremely high stress – the Colorado and the Rio Grande—which provide water supplies to eight states. More than 30 million people depend on the Colorado alone for water. Both of these rivers rank in the top 18 most-stressed river basins around the world, when analyzed by population.

And these risks are projected to increase. Climate change will generally make precipitation more extreme, variable, and unpredictable in the years ahead. Additionally, hotter average temperatures mean drier soil, so farms may face greater risks to their crops and ranchers to their herds, even if it rains more regularly.

How Can We Ensure a Water-Secure Future?

There is hope, however, for solutions. As the steady stream of national-level coverage and this video series demonstrate, national awareness amongst all stakeholders is starting to build – from individual water users, to politicians and business people, to celebrities like Don Cheadle, who hosted the Plainview story.

That attention can only help further some of the approaches that aim to bring water demand more in line with available supply for agriculture, industry, and municipalities. For example, some companies are starting to realize that water risks pose serious implications for their bottom lines. Cargill now participates in the CDP’s water-risk disclosure program. Tools like CDP’s survey are essential as more and more investors seek water-risk information and companies take water risk evaluation and mitigation more seriously. California is among the states leading the way in researching demand-reduction strategies. And in Australia, another notorious drought hot spot, the government has invested heavily in water efficiency and created an innovative water-rights trading system to cap overall demand and preserve water for the surrounding environment.

Wherever drought and water stress overlap, reducing water use is an essential step toward long-term economic, social, and political stability. We’re starting to figure out solutions to the world’s water woes—but truly creating a water-secure future will require more information, research, and innovation.