In appreciation for all the benefits forests provide for us, the UN has announced that today, March 21, be recognized as the International Day of Forests. It is a day to celebrate, among other things, the progress we have made improving forest management.

But before getting carried away with the spirit of celebration, consider this: We are still losing forests and trees much faster than they can regrow. In fact, we are losing 50 soccer fields worth of trees every minute!

Many people are working to reverse tree cover loss in the world’s largest remaining forests: the Amazon Basin, the Congo Basin, the tropical forests of Indonesia, and the vast boreal forests of Russia and Canada. These are worthy goals, considering that just two countries—Brazil and Indonesia—still account for about half of all tropical forest loss.

But several hugely important deforestation hotspots are still flying under the radar. These forest areas don’t get the headlines or resources of the major tropical regions, but are seeing alarming trends or have lost much of their tree cover already. Below, we use the latest data from Global Forest Watch, an online forest monitoring and alert system, to dive deeper into some under-reported forest hotspots.

1. Paraguay: The Gran Chaco Is Being Cleared for Soy and Beef 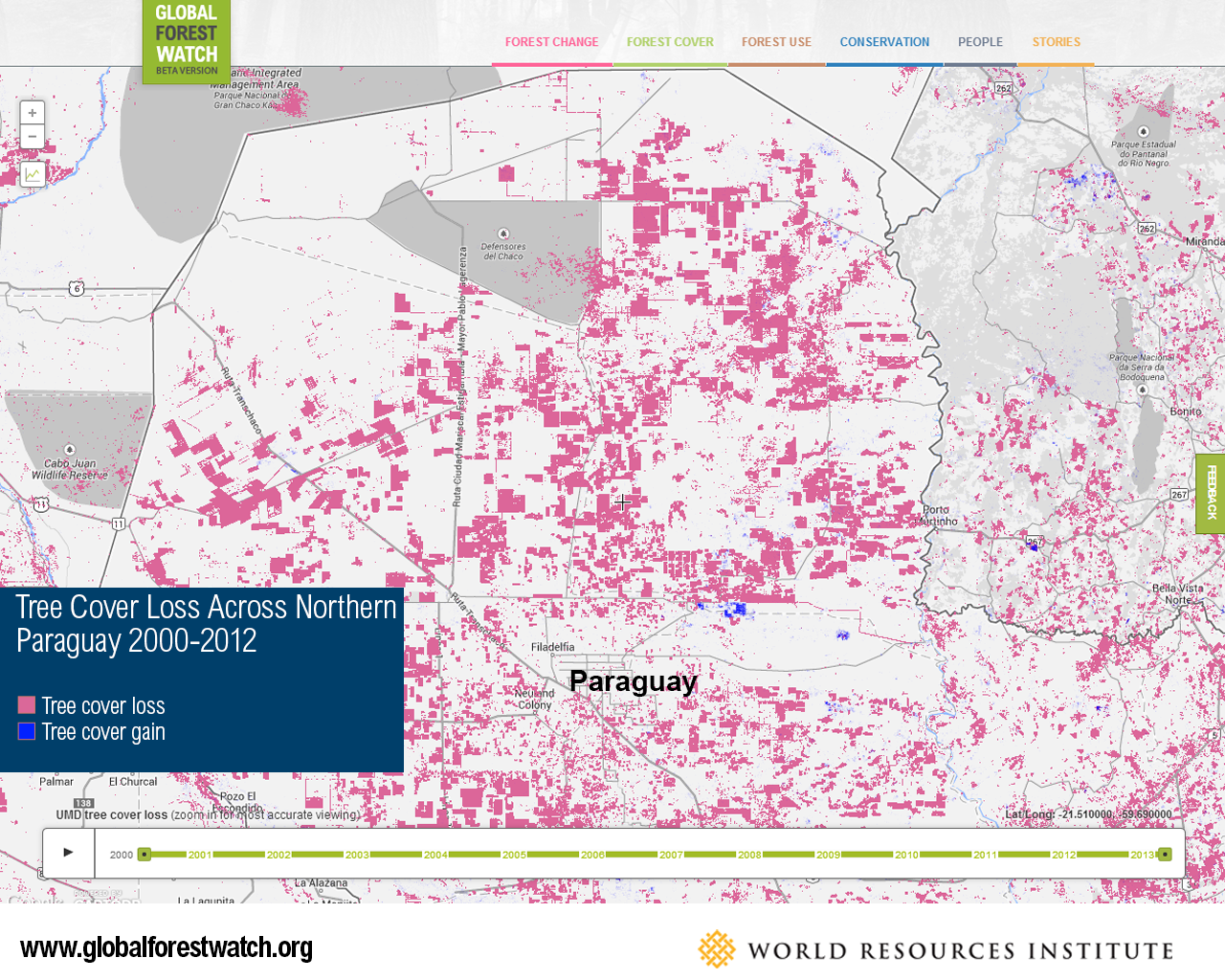 The Gran Chaco, a semi-arid region of dry forests spread across Paraguay, Bolivia, Argentina, and Brazil, is being rapidly deforested, as large rectangular plots of forest are burned or cleared for soy fields and cattle ranches. Guyra, a Paraguayan environmental group, has estimated that 10 percent of the Chaco forests have been cleared in the last five years alone. According to University of Maryland data, Paraguay has lost almost 4 million hectares of tree cover since 2000 and ranks among the top countries in the world for percentage of tree cover lost. If left unchecked, deforestation could wipe out habitat for jaguars, maned wolves, and rare peccaries, as well as threaten a way of life for the Chaco’s embattled indigenous people.

It is not just tropical forests that are under threat. Industrial developments associated with the Athabasca tar sands have cleared thousands of hectares of Canada’s boreal forest since the year 2000. The use of tar sands as a source of fossil fuel—and the development of the associated Keystone Pipeline—have been hotly debated, but relatively little attention has been paid to the local impacts on Canada’s forests.

The animation above shows extensive tree cover loss near Fort McMurray as new pipelines are laid and the ground is cleared for open-pit mining. Smaller “checkerboard” patterns of tree cover loss and gain show industrial forestry on the margins of larger mining operations.

Global Forest Watch Canada, an independent Canadian NGO, has published in-depth reports on the local environmental impacts of the Athabasca tar sands, and continues to monitor forests in the region. 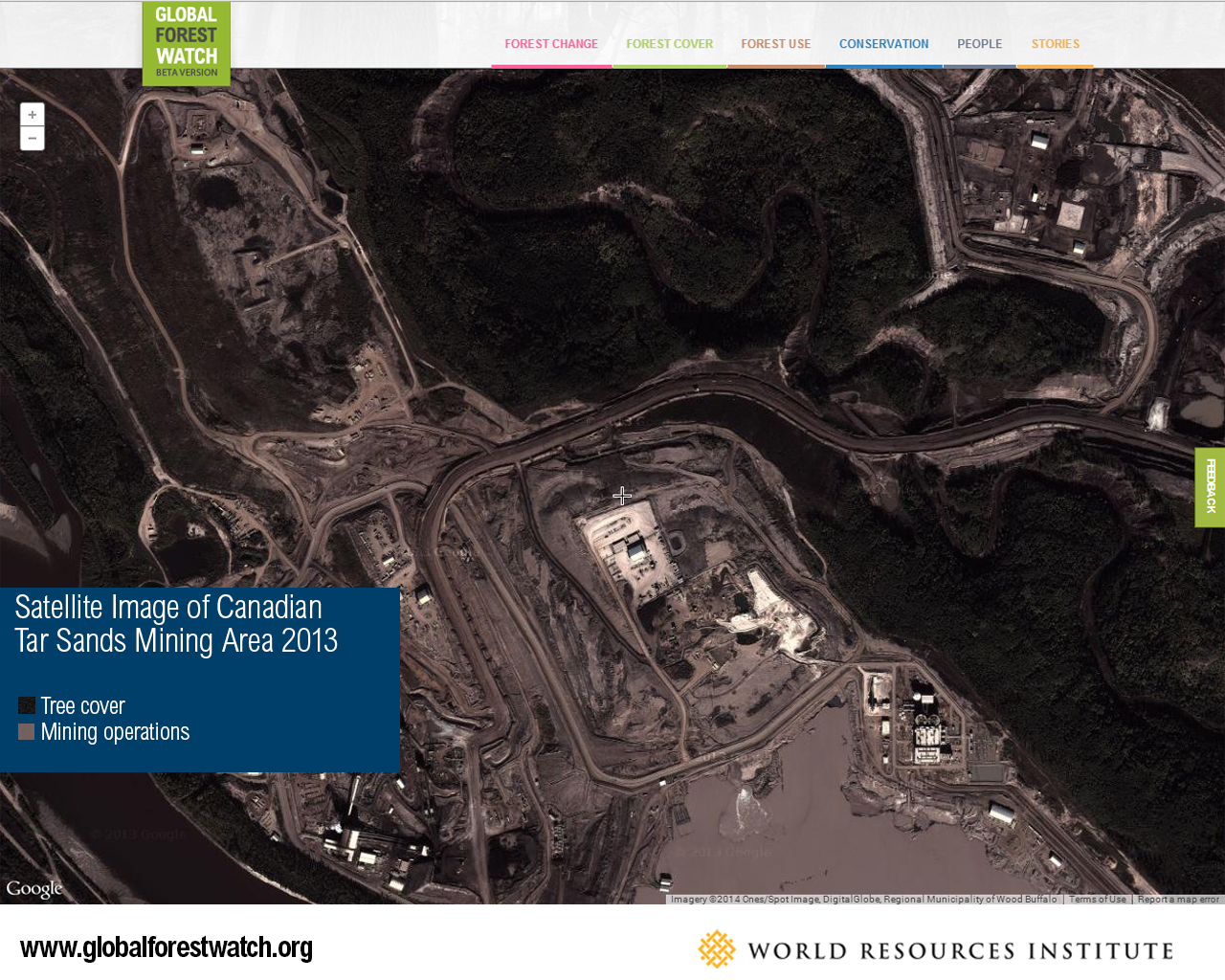 Indonesia is now the focal point for much of the world’s concerns about deforestation. But neighboring Malaysia also shows plenty of reasons for alarm.

While the absolute area of forest lost in Indonesia is higher, Malaysia lost a staggering 4.7 million hectares of tree cover from 2000-2012—an annual loss of 1.6 percent, compared with Indonesia’s 1.0 percent. This puts Malaysia among the top 10 countries for percent tree cover lost. Expansion of oil palm plantations is one of the major drivers (especially in Sarawak) as Malaysia feeds a hungry global market. 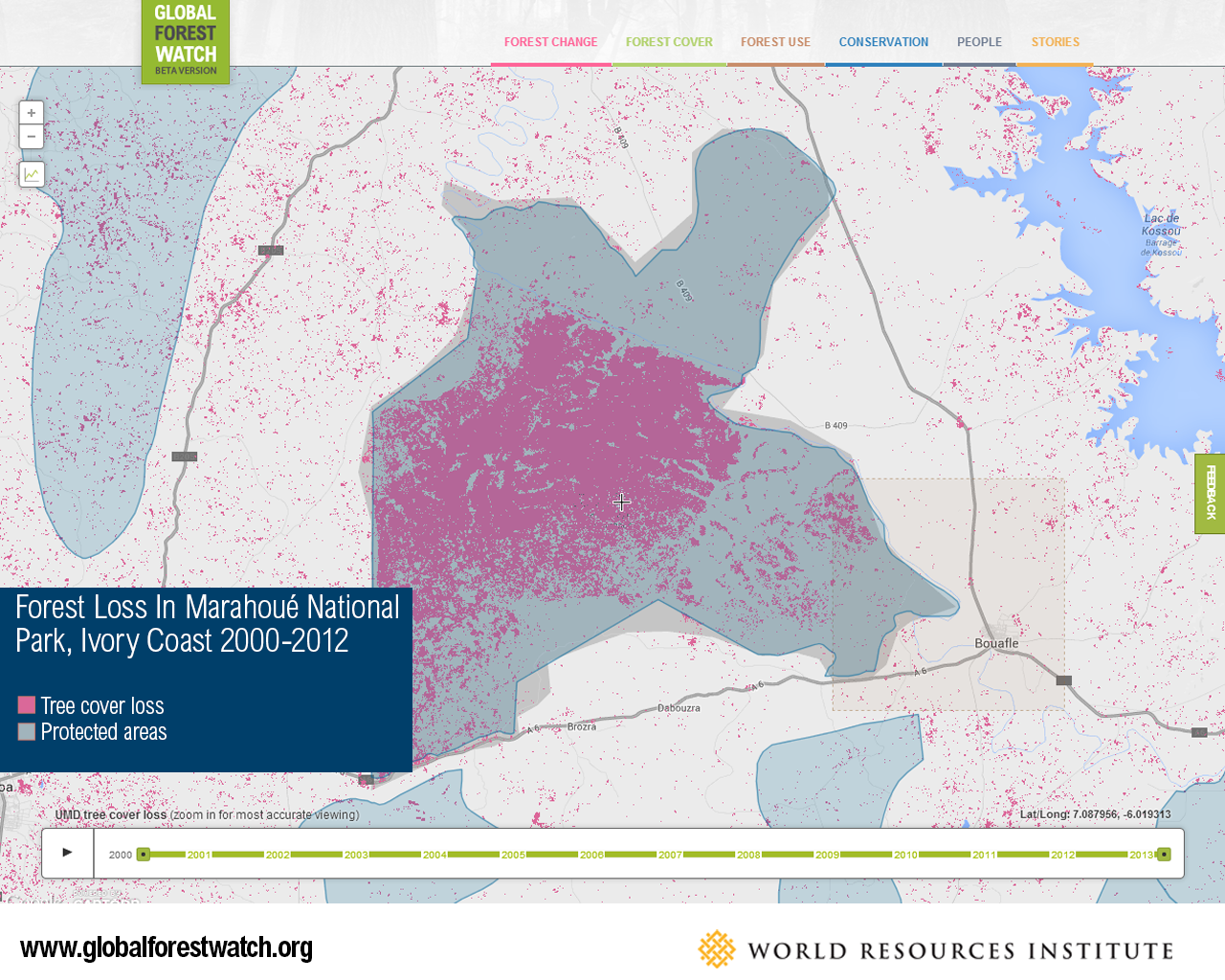 In Africa, the forests of the Congo Basin—including those in Cameroon, Gabon, Central African Republic, Equatorial Guinea, Republic of Congo, and Democratic Republic of Congo—tend to dominate the public’s attention. But the past decade has seen a spike in tree cover loss across the West African nations of Ghana, the Ivory Coast, Liberia, and Sierra Leone, which have rich forests and biodiversity hotspots of their own.

Marahoué National Park in the Ivory Coast is a dramatic example. A recent study in Current Biology estimated that the park lost a staggering 93 percent of its forest cover between 2002 and 2008, possibly due to the country’s civil conflict. The park had previously been a stronghold for the rare West African chimpanzee (Pan troglodytes verus). Now the population has been almost entirely eradicated.

“Deforestation” is a term rarely applied within the United States, given the highly managed nature of many U.S. forests. But urban sprawl and a growing demand for more and bigger houses have led to significant forest loss. The animation above shows forests being converted into suburbs outside of Atlanta, including a batch of new housing developments and golf courses near Acworth, Georgia. WRI has used land cover data from the U.S. Geological Survey to map the region’s extensive forest loss caused by suburbanization (see visualization here).

Suburbanization is projected to clear much more of the United States’ rich southern forests in the coming years. The U.S. Forest Service estimates that 12.4 million hectares (31 million acres) of southern forest will be lost to development between 1992 and 2040, an area roughly equal to the size of North Carolina. This will mean the loss of some of the most bio-diverse forests in the United States, which provide hundreds of millions of dollars’ worth of timber, water purification, erosion control, and recreational opportunities.

Why have these hotspots been relatively overlooked? Perhaps it is because we have lacked an easy way to visualize forest change at a global scale. This has now changed with the launch of Global Forest Watch and powerful new global data from the University of Maryland, Google, and other partners. Decision-makers should take heed that forests have now entered the era of big data, and there are tools at hand to address deforestation challenges that were previously hard to detect or quantify.

But we also need to act on the data. It is time for governments, businesses, and NGOs to pay more attention to these overlooked hotspots, as well as other under-studied deforestation hotspots in Bolivia, Zambia, Angola, Cambodia, Argentina, and Russia.

So when you observe this year’s International Day of Forests, do something to give back to forests. Go online, and start exploring Global Forest Watch’s data. You just might help uncover the next deforestation hotspot that the world needs to hear about.

LEARN MORE: Use Global Forest Watch to share your story with the world by submitting a user story here.