As the U.S. Environmental Protection Agency (EPA) moves forward with standards to reduce emissions from existing power plants—which are due to be finalized in June 2015—many states are wondering how they will comply. WRI’s fact sheet series, Power Sector Opportunities for Reducing Carbon Dioxide Emissions, examines the policies and pathways various states can use to cost-effectively meet or even exceed future power plant emissions standards. This post explores these opportunities in Minnesota.

Read about additional analyses in this series.

Thanks to efforts to reduce its coal use, Minnesota is producing more power while decreasing its carbon dioxide pollution. But the state has the potential to go even further.

New WRI analysis finds that Minnesota can reduce its carbon dioxide emissions 31 percent below 2011 levels by 2020 just by complying with its current policies and taking advantage of existing infrastructure opportunities. Achieving these reductions will allow Minnesota to meet potentially ambitious EPA power plant emissions standards, which are due to be finalized next year.

Minnesota’s Power Sector Is Getting Cleaner

Between 2005 and 2011, electric generation in Minnesota grew by 2 percent, while CO2 emissions from the power sector declined by 18 percent. This is mostly because coal-fired generation in the state decreased 14 percent while natural gas generation nearly doubled and renewable generation more-than-tripled.

The state plans to continue to decrease its reliance on coal. The average age of the state’s coal generators with at least 50 MW generating capacity is more than 50 years, and the Minnesota Public Utility Commission requires all regulated utilities to examine the costs of retrofitting or replacing old coal-fired power plants. This process has resulted in plans to retire five such units in Minnesota. Furthermore, the state passed legislation in 2007 banning the construction of new coal plants, as well as the import of coal-generated electricity unless 100 percent of carbon dioxide emissions are offset.

As we discussed in a previous blog post and as EPA Administrator Gina McCarthy stated recently, states may have considerable flexibility in how they comply with EPA’s forthcoming power plant emissions standards. EPA could allow states to pursue a range of CO2 reduction opportunities—including greater use of existing lower-carbon power plants, renewables, and energy efficiency, among other strategies. Our analysis found that Minnesota could use the following tools to reduce its power sector CO2 emissions:

Minnesota’s Clean Energy Policies Are Good for the Economy

To meet their energy efficiency targets, Minnesota’s utilities offer a variety of energy-saving programs to their customers, including rebates, energy audits, and manufacturing process improvements. The economic benefits of these measures have been shown to outweigh their costs—Xcel Energy reported that their electric savings programs will provide more than $376 million in net benefits to their customers in 2012.

Energy efficiency is often the lowest-cost utility resource as well. The Minnesota Department of Commerce found that the average cost of reducing electricity demand through the state’s Conservation Improvement Program is at least three times lower than building new generation from other energy sources. For example, because of its energy efficiency programs, Xcel Energy customers have saved enough energy since 1992 to avoid building 10 medium-sized power plants.

Minnesota’s growth in renewables has also helped drive down energy prices in the state. Xcel found that the wind sources they added caused energy prices to fall about 0.7 percent in 2008-2009 compared to what prices would have been without the added wind. Going forward, Xcel does not expect compliance with the state’s renewable energy standard (RES) to have a significant effect on energy prices. In fact, the state Public Utility Commission just approved Xcel’s request to build or buy power from new wind farms in Minnesota (400 MW) and North Dakota (350 MW); Xcel is going beyond the requirements of the RES because doing so will save customers more than $225 million over the projects’ lives. Additionally, Otter Tail Power, serving customers in western Minnesota, has stated that it would have added wind capacity even in the absence of the RES because wind has been the most economical option in recent years.

Minnesota Can Build Off Progress Made to Date

Minnesota’s experience has shown that emissions reductions are achievable and economically beneficial. This is all the more reason why the state should take additional steps to achieve even greater reductions in both the near- and long-term. For example, the Minnesota Department of Commerce is currently studying the feasibility of increasing the RES to 40 percent by 2030. By taking additional action, Minnesota will not only be able to meet EPA’s power plant emissions standards, but can help prevent the worsening impacts of climate change. 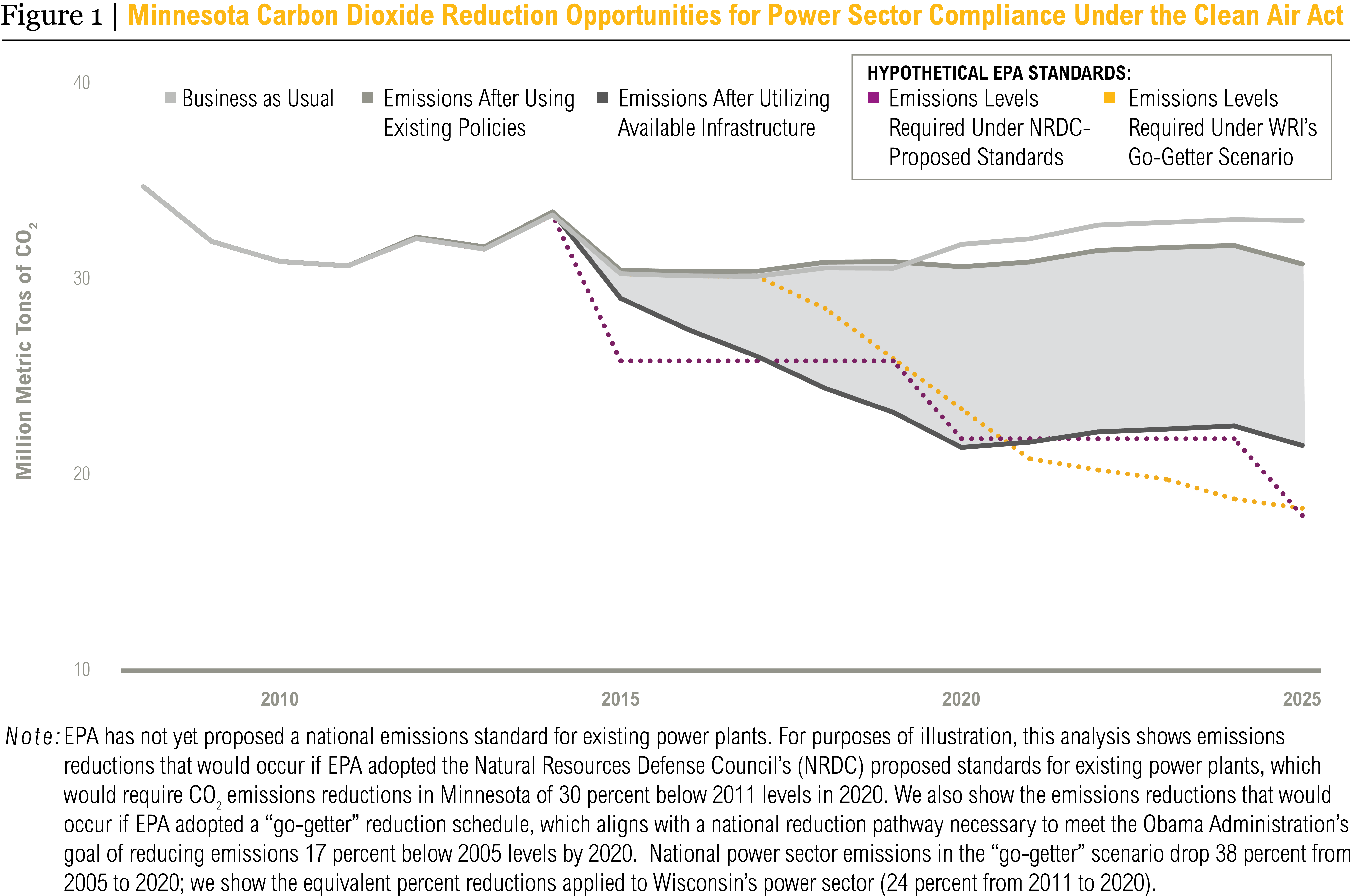