Last week, ministers from 50 countries convened in South Korea for a “Pre-COP” meeting to prepare for the upcoming UNFCCC conference in Doha, Qatar (COP 18). Ministers confirmed their commitment to negotiate a new international climate framework by the end of 2015, as outlined in the Durban Platform agreed to at COP 17 last year.

While the Durban Platform gave new momentum to multilateral climate negotiations, the emissions gap remains large: The greenhouse gas reductions countries are currently willing to commit to don’t add up to the global reductions needed to limit warming to 2° C above pre-industrial temperatures. It’s clear that leaders need new ways to increase ambition enough to close this gap and reinforce the UNFCCC.

In this context, we are seeing a renewed interest in “clubs” – smaller groups of countries coming together to act on climate change, complementing the UNFCCC process. The question, though, is whether such clubs can make real progress toward closing the emissions gap.

More and more climate-related clubs are emerging. For example, in February, the United States and five other governments launched the Climate and Clean Air Coalition to Reduce Short-Lived Climate Pollutants. In August, the German environment minister announced plans to create an “international club of states committed to promoting the expansion of renewable energy.” And alongside the “Pre-COP” meeting, the Global Green Growth Institute held its first Assembly and Council meetings since the Seoul-based think tank was transformed into an international organization with 18 member countries.

In a forthcoming article in the Review of European Community & International Environmental Law, we analyze 17 existing clubs that deal with climate change – either exclusively or as one of several issues. We find that all of them can be grouped into two categories (see figure below): dialogue forums, where member countries exchange information and gain a better understanding of each other’s positions, and implementation groups, which collectively implement strategies, programs, or projects. 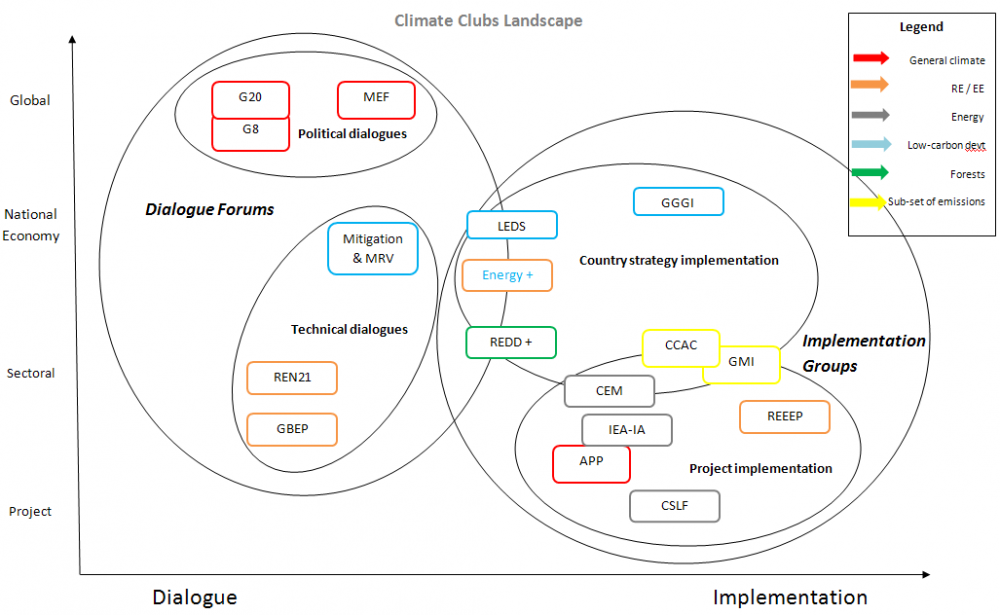 Dialogue and implementation clubs – such as the International Partnership on Mitigation and MRV and the Energy+ Partnership – make important contributions to addressing climate change, as they enable a better understanding of country positions and catalyze a number of activities in specific fields that help reduce emissions. That’s why WRI has provided analysis and advice to many of them. But these clubs deliver incremental rather than transformational change. Their mandates and configurations are not focused on significantly increasing ambition, but rather on various pieces of the bigger puzzle. They do not dramatically reduce emissions at the scale and speed required to keep global temperature rise below 2°C. Therefore, we need a new kind of club if we really want to close the ambition gap.

What would make a climate club transformational – and consistent with the 2°C target? Based on analysis of current literature and an assessment of other initiatives, in the forthcoming article, WRI has developed four criteria:

There are other important questions—for example those concerning institutional design and which countries will become members. While many existing clubs seem to focus on getting a maximum number of large emitters involved, we argue that more attention should be paid to what a club does rather than who is in it. A two degrees club would start as a small group of leadership countries. This club wouldn’t close the global emissions gap through emissions reductions in member countries alone. Instead, it would provide proof-of-concept for low-emissions development, accelerate technology development, and create momentum. The club would be transformational because it would create an attractive model that others would follow.

Clubs and the UNFCCC

The two degrees clubs outlined above cannot replace the UNFCCC, which remains the one platform where global ambition and equity can be discussed and potentially agreed upon.

However, two degrees clubs could complement the UNFCCC, as they would enable member countries to take on more ambitious commitments and pull other countries with them. Defining the relationship of such clubs to the UNFCCC could become an important issue in the ongoing negotiations – the clubs could formally or informally report to the UNFCCC. Going further, the actions of the club members could also be negotiated, recognized, and monitored within the UNFCCC.

What’s Next for Climate Clubs?

In the run-up to Doha, we expect that more club initiatives will be announced. Assessing them using the criteria outlined above will enable us to understand whether they could have a transformational impact or merely an incremental effect. In the coming months, WRI will continue its analysis on clubs and work with governments and other stakeholders who are interested in creating two degrees clubs. Whether or not a truly transformational two degrees club is formed hinges on the political will of some pioneering governments to try it out and lead the way.