India recently experienced one of the world’s worst blackouts, with 670 million citizens directly impacted. While media reports have focused on the repercussions from two days of outages, this incident illustrates a much larger, more systemic problem: the need for improved electricity governance.

India has the world’s fifth-largest electrical system, with an installed electric capacity of about 206 gigawatts (GW). India initiated power sector reforms in the early 1990s through a range of legal, policy, and regulatory changes. Over the last two decades, some of these reforms have been impressive, but several others weren’t taken. This lack of follow-through has resulted in a growing gap between electricity demand and supply throughout the country. Recent blackouts may have shined a spotlight on this gap, but it’s a situation that’s widespread in India: Not only do 400 million Indians lack access to electricity, but electricity supply is unreliable and of poor quality even in large parts of “electrified” India. In addition to the existing demand, Indian consumers, businesses, and industries seek more electricity to power appliances, processes, and products, further exacerbating the demand-supply gap. By 2035, India’s power demand is expected to more than double.

In looking at the recent blackouts and India’s power supply situation in general, three major governance issues jump out: 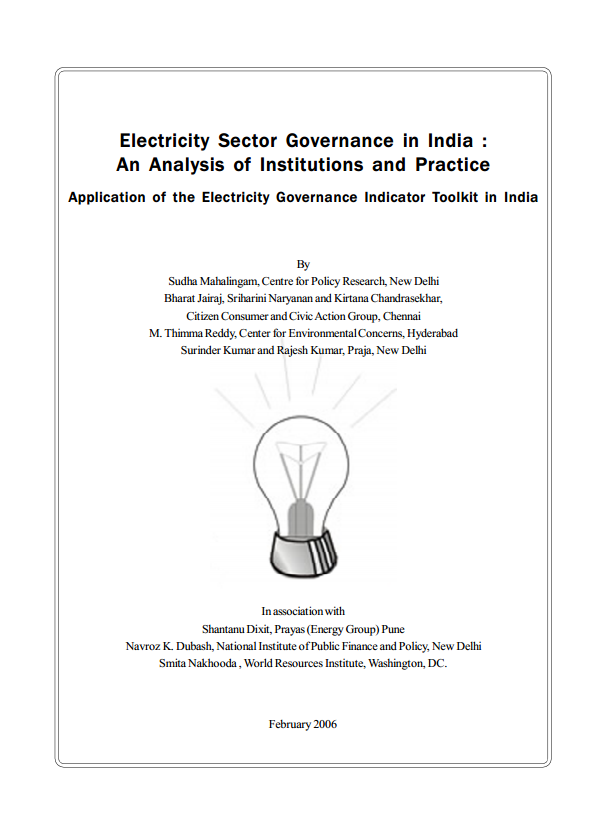 This list certainly isn’t exhaustive—several other interlinked problems contribute to the malaise affecting India’s power sector, from bad monsoons and water scarcity to inefficient electrical appliances. There are solutions to some of these concerns through improved technology (such as isolating and responding to grid problems and enhancing power plants’ efficiency) and innovative policies (like holistic planning approaches and incentivizing grid discipline), but addressing the accountability and governance issues are key to improving India’s power sector.

WRI’s Electricity Governance Initiative (EGI) is a network of civil society organizations working to promote transparent, inclusive, and accountable decision-making in the electricity sector in several countries, including India. EGI’s 2006 assessment of India’s power sector identified a range of core electricity governance problems in India. Following the assessment, EGI has begun a project that could provide a pathway to avoid another disaster like India’s recent blackouts. The project seeks to develop a holistic and participatory approach to electricity planning, working with decision-makers to close the “holes” and explore the potential of improved energy efficiency and renewable energy in order to shrink the demand-supply electricity gap.

Indian civil society can also play a role in improving governance. Citizens can create a “demand” for improvements by asking that information on sector problems and potential solutions be placed in the public domain. They can also hold decision-makers accountable for providing affordable, reliable, and quality electricity for all. Unless both citizens and decision-makers start to chip away at India’s core governance problems, blackouts—and a host of other power problems— will likely become increasingly common.