As the climate changes, the global community and national governments both need to take action to prevent the kind of humanitarian disaster underway In parts of the Horn of Africa. Early action can help communities confront climate change, take advantage of ecosystem services, and prevent future food-related tragedies due to drought and other extreme weather.

People relying on agriculture and livestock rearing for their livelihoods make up over seventy percent of the total population of east Africa. Over the last two years, the eastern part of the region has faced two consecutive failed rainy seasons. The UN reported that dry-lands of Ethiopia, Kenya and Somalia were facing "one of the driest years since 1950/51." This extreme lack of rain has reduced the ability of people in the region to grow their food. Pastures have dried up, making it impossible to sustain cattle. With animals and agriculture in jeopardy, the main sources of food and income for many in the region have been greatly threatened. The United Nations Office for the Coordination of Humanitarian Affairs (OCHA) declared a famine in parts of Somalia on July 28, 2011.

A Drought Does Not Have to Result in a Famine

East Africa faced a number of droughts in the 1990s and the 2000s that caused much hardship, but not a famine. A drought can cause food shortages and increases in food prices. But it does not automatically have to result in a famine.

A famine is often the result of politics gone wrong. Institutions unable to respond to increasing stresses, ongoing conflicts that prevent the movement of people, or the lack of programs to give people a safety net in hard times can play large roles in turning a drought into a famine. Somalia has been ravaged by conflict and a breakdown of governance for years. As a result, some parts of southern Somalia face famine conditions, while areas in Kenya and Ethiopia with similar ecosystems and climatic conditions do not. (See below for maps that display this distinction.) These areas face grave difficulties with food security, but they are not facing famines because their governments have taken action to avert the worst of the crisis.

A drought, unlike many other extreme weather events, can creep up slowly and incrementally. Signals of impending problems can be identified before crisis hits, and in fact, several early warning systems and organizations in the Horn of Africa raised warnings about the approaching humanitarian disaster, some as early as last year, and many from March 2011. Unfortunately, those warnings fell on deaf ears in Somalia.

In contrast to the situation in Somalia, pre-positioned food supplies in Ethiopia helped authorities respond rapidly once drought conditions became severe. State-sponsored safety net programs helped catch people who were suffering from drought before things got really bad. The first food distribution in the country began months earlier in February and have continued to the worst affected communities in the country. 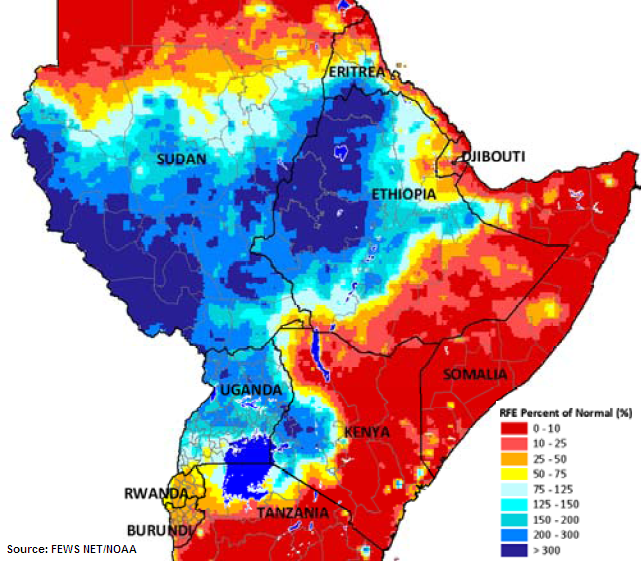 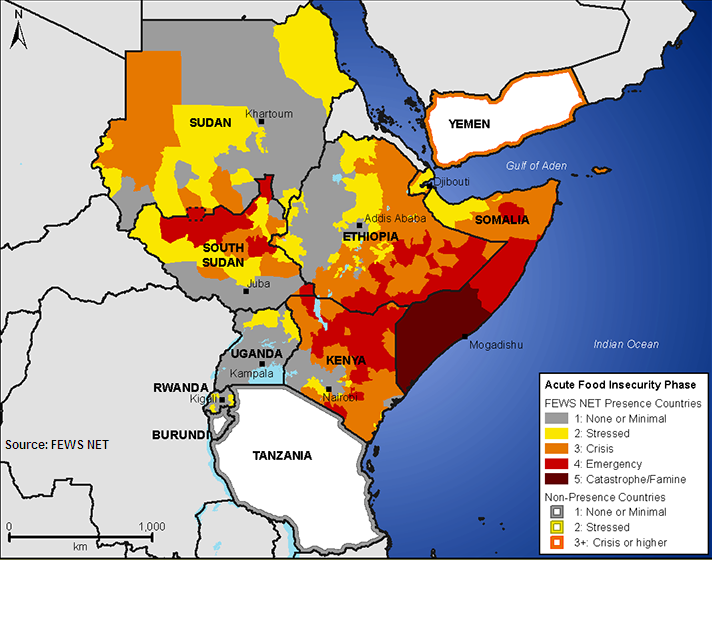 Figure 1 shows rainfall levels as a percentage of the typical rainfall for that season (as averaged over several decades), highlighting the areas afflicted by drought conditions. Figure 2 is an estimate of food security conditions for the same region in the period directly following this. While a number of regions in Somalia, Kenya and south-west Ethiopia face similar rainfall performance the food security impact varies widely from stress to the extreme of famine. Meanwhile, other locations such as South Sudan face a stress/crisis situation despite above average rainfall.

It is notoriously difficult to determine if any one extreme event is the result of climate change. Studies that can prove this causality often require significant amounts of historical rainfall and temperature data and sophisticated modeling techniques that are hard to come by in many developing countries, including many in east Africa.

Many climate change modeling exercises provide clear future trends for temperature in east Africa. They predict that the region will get hotter as greenhouse gases increase. Historical data from the region also clearly demonstrate an upward trend for temperatures (here and here). Rainfall projections, however, are not as clear as projected temperature trends. Some climate models, for example, predict that east Africa will get wetter, particularly during the shorter rainy season from October to December. In other models, the region faces an increase in sudden and unpredictable downpours in the future due to climate change. Other studies predict that rainfall, particularly the long rains from March to May, will decrease.

Whether the overall trend is wetter or drier, the models agree that rainfall will most likely be more erratic in the future, and will diverge from established seasonal patterns. Especially since the El Nino Southern Oscillation (ENSO) has a significant impact on weather patterns in east Africa, the region faces many uncertainties about its future climate. How climate change will impact the ENSO is not clear. In general, however, the Intergovernmental Panel on Climate Change (IPCC) predicts that that the frequency and severity of extreme weather events globally will increase over time with climate change.

This does not bode well for parts of east Africa already suffering from significant drought stress. As temperatures increase and precipitation becomes more erratic, general agricultural and cattle herding practices will need to change significantly. Growing seasons will most likely change, and the types of crops appropriate for the region might be different ten years into the future. Climate change will create new weather conditions that farmers and herders will have to treat as the "new normal"---less predictable rainfall, higher temperatures, more severe extreme events. Those already poor and powerless are likely to face the greatest challenges from these changes. Communities, governments, and donor agencies will need to address the social, economic, and environmental factors that make some people especially vulnerable if society is to adapt successfully to changing conditions.

Minimizing the Impact of Droughts

Investments made prior to a drought can minimize its negative consequences more effectively than humanitarian response in a moment of crisis. These investments may be designed to address the unique impacts of droughts (for example, investments in land and water management practices to increase the supply and decrease the demand for water.) They can take the form of better information management systems that provide actionable early warnings about the coming drought or which signal changes in food security. But important investments are also needed in general development activities that raise incomes, improve livelihoods, and otherwise increase the ability of vulnerable people in the region to continue to do well despite increasing stress from droughts.

Several sustainable land and ecosystem management practices, like slowing down run-off, building water storage structures in catchment areas, planting tree species that promote the growth of other plants, and diversified agro-forestry practices that help maintain vegetation cover can help lessen some of the harsher consequences of dry periods. Such practices can lessen the impacts of a drought by sustaining and safeguarding the benefits that ecosystems provide, often called ecosystem services (see here for a Voice of America report that features WRI’s Robert Winterbottom). These activities also can help diversity livelihoods and assist communities in moving away from a dependence on rain-fed agriculture and foraging toward less vulnerable and more resilient rural systems.

Providing appropriate safety nets to communities can also help lessen drought’s negative impacts. When income and food from agriculture and cattle rearing decrease, food-for-work programs or emergency food distribution systems can provide the poor and vulnerable with the help they need. The most vulnerable people, such as pastoralists in Somalia, Ethiopia, and Northern Kenya, will need the greatest level of such support. Early warning systems can prepare governments and donors to respond to situations before they turn into emergencies.

Current conditions in Somalia require the international community to provide immediate humanitarian support in the form of food, shelter, and other vital supplies. Governance failures and conflict in Somalia make delivery of this support very challenging, and have for years prevented investment that might have enabled early action. In other parts of east Africa, however, early action can prevent drought risks from turning into catastrophic disasters. As the climate changes, it is critical for governments and donors to make locally appropriate long-term investments that build the capacity of people and communities to respond proactively to extreme weather.