A new WRI report explores what makes public ballot measures successful and how they can help conserve forests in the U.S. South.

Public conservation ballot measures are a means to secure citizen approval to raise public funds for conservation. They allow people to vote at the state or local level to approve new public funding—from bonds, taxes, lottery proceeds, or other sources—to dedicate to the conservation of natural landscapes, bodies of water, and/or farmland.

These ballot measures have a strong track record of success in the United States. Between 1988 and 2010, voters secured more than $58 billion for conservation.76 percent of proposed ballot measures were approved. In fact, these measures have received public support even during periods of economic recession, such as 1990-91 and 2008-09.

For example, Maine voters have passed five bonds to fund the “Land for Maine’s Future” program, which invested over $57 million dollars in the protection of more than 504,000 acres of land between 1998 and 2008. This acreage is more than threefold the amount acquired by funds approved by the state legislature.

But how can these measures help fund more conservation in the southern United States? The World Resources Institute’s new issue brief Funding for Forests: The Potential of Public Ballot Measures explores what makes ballot measures successful and how lessons learned can increase support for conservation of forests and other open space in the South. 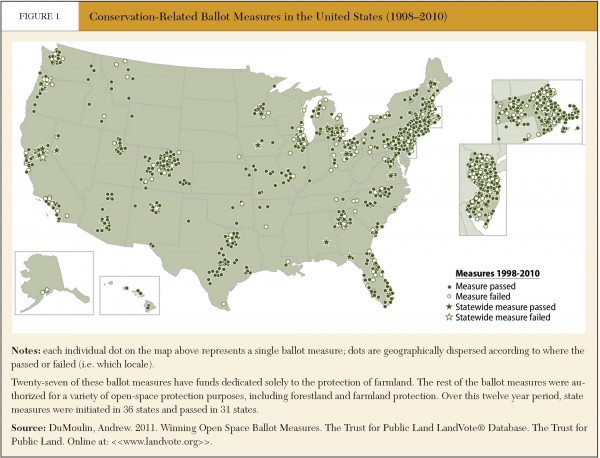 Conservation-Related Ballot Measures in the United States (1998–2010) Each individual dot on the map above represents a single ballot measure. Successful measures appear to be more prevalent in areas with large population centers.

How have ballot measures fared so far in the U.S. South?

Southern states raised approximately $7.5 billion between 1988-2010 from ballot measures for conservation, with a high average passage rate of 82 percent. The passage of these measures, however, has varied significantly among states. To date, Florida and Texas have each passed more than 80 measures, while Tennessee and Louisiana have only passed 1 measure each, and Mississippi and Kentucky have not passed any measures (Table 1).

Most of the ballot measures passed tend to be local, with the vast majority at the municipal and county, rather than state level. Though local, these measures can be quite successful in raising large amounts of funding for conservation. For instance, Martin County, Florida, passed a ½ percent increase in sales tax in 2006 that approved $60 million for clean water, wildlife habitat, and park improvements.

Several factors may have contributed to the disparities among southern states. 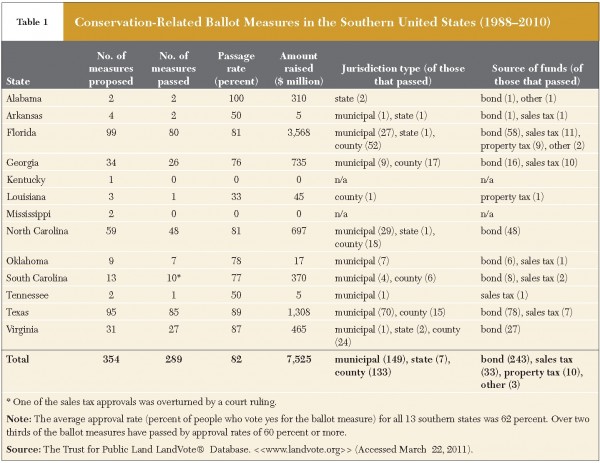 Overall, there is significant need for ballot measures in the region to help finance conservation given that 31 million acres of forest – an area the size of North Carolina – is slated to be lost to development by 2040 in the South if current trends continue.

How can the U.S. South increase conservation funding from ballot measures?

The conservation-related ballot measure has a proven track record of use in the South. It has been effective in raising large amounts of funds, and, where applied, appears to enjoy strong public support. So what can be done to ramp up utilization of this promising approach? Several actions could help achieve this objective:

Conservation-related ballot measures have already unlocked billions of dollars for conservation nationwide and have tremendous potential for growth in the South. For more information and discussion on how to increase the use of public ballot measures in the South, please download Funding for Forests: The Potential of Public Ballot Measures.