During the winter holidays, there are many items that Americans consider “essential” as part of a proper celebration; whether it be a wreath on the door, wood for a cozy fire, or an ornamented tree in the living room. But how many people know where most of these items come from?

Often, these everyday holiday products are sourced directly from forests in the southern United States. Forests provide people, communities, and businesses with a wide range of goods and services. For example, they provide pulp for paper, control soil erosion, filter water, and offer outdoor recreation opportunities. These and other benefits are known as “ecosystem services.”

While ecosystem services may seem like an obscure concept, many of these services can be found in the average American home during the winter holiday season. Here is a list of some common holiday ecosystem services often derived from southern U.S. forests. 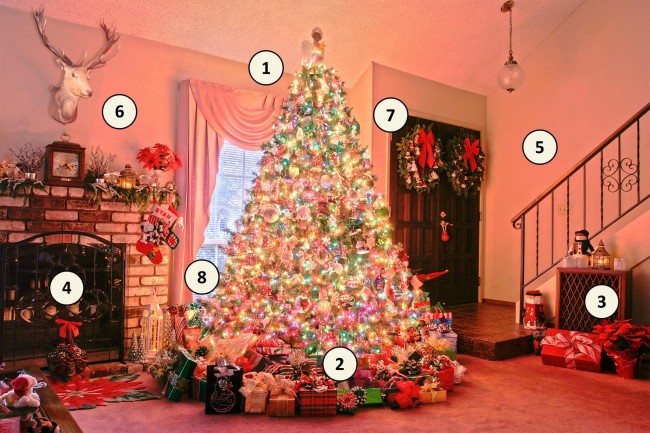 An ecosystem service that needs little introduction, Christmas trees are a centerpiece for many holiday celebrations. They can come in many varieties, including Scotch pine, Douglas fir, Noble fir, and Virginia pine, and take an average of 7-10 years to mature. Growing Christmas trees provides a habitat for wildlife and the trees remove dust and pollen from the air. The Christmas Tree Industry employs 100,000 people in the United States.

Manufacturers convert a variety of softwood and hardwood species to pulp for making cardboard, office paper, tissue, and other paper products. For U.S. markets, much of this raw material comes from southern forests, which generate 18 percent of the world’s pulpwood for paper and paper-related products, despite only accounting for 2 percent of the planet’s total forest cover.

Although not found in southern U.S. forests, poinsettias are a holiday fixture with an interesting southern connection. The colorful plant was first introduced into the United States in 1825 by Joel Robert Poinsett, the first U.S. Ambassador to Mexico, when he had the plants sent to his home in South Carolina. They are currently the best selling flowering potted plant in the United States and represent more than 85 percent of the potted plant sales during the holiday season. In fact, $220 million worth of poinsettias are sold during this season alone.

Trees, wood, and wood residues from southern forests provide energy and heat for families and businesses across the country. In 2007, more than 300 million cubic feet of domestic fuelwood—just a portion of total biomass fuel generated—was harvested from southern forests, which is equivalent to roughly 2.5 million cords. The total value of this domestic fuelwood harvest was approximately $188 - $375 million.

5. Lumber and plywood for homes and furniture

Many southern forests are “working forests” in that they are actively managed to yield timber and pulpwood, producing 8.6 billion cubic feet of wood in 2006. Wood supplied by southern forests generates significant economic benefits in the South. For instance, southern yellow pines and oaks are popular choices for building homes, furniture, and flooring. In 2007, the value of sawtimber, veneer logs, poles, and pulpwood harvested from southern forests was nearly $12 billion. Furthermore, nearly 600,000 jobs were generated by harvest activities and the indirect and induced spending by businesses and households associated with this activity.

Many people hunt in southern forests and surrounding areas. In 2000, more than 6 million people went hunting in the South for big game such as white tail deer1, nearly 6 million hunted for small game such as rabbit, and approximately 2 million hunted for migratory birds such as ducks. In 2006 alone, expenditures on hunting, fishing, and wildlife-watching activities in the South were an estimated $41.4 billion.

Wreaths can be made from many different forest materials, but are frequently made from grapevines, although kudzu is also another common material used in the South. Kudzu, “the vine that ate the South,” was introduced to provide attractive ground cover and control rampant soil erosion caused by poor farming and forestry practices; however, it grows at a prodigious rate and can climb over trees, smothering all vegetation below its thick canopy of foliage. Like most invasive plants, it is very difficult and expensive to remove once established.

8. Pine needles and bark for mulch and bedding

In the South, pine straw is mostly harvested on private lands and can provide an important economic contribution to land owners and local economies. In Georgia, for example, the total estimated value of harvested pine straw increased from $38.4 million in 2005 to more than $62 million in 2006, representing 9.4 percent of Georgia’s total forest products industry.