With the price of timber declining, hundreds of thousands of private woodland owners across the South are struggling with balance sheets in the red.

America’s woodlands are invaluable. In the South, a typical privately owned woodland plot can act as a source of timber, a source of non-timber forest products such as ginseng and mushrooms, and a recreation site. It may also provide game for hunters and a home to wild turkeys, foxes and a host of other wildlife (no less than 92% of U.S. bird species and 69% of reptiles reside in the South). Woodlands filter and purify water supplies and store carbon, helping reduce emissions leading to climate change.

Yet most woodland owners receive income from just one of these many services—timber.

With the price of timber declining, hundreds of thousands of private woodland owners across the South are struggling with balance sheets in the red. At the same time, six in ten parcels of the region’s shrinking quilt of forests are owned by individuals and families, and three-quarters of these owners are 55 or older. This means a large generational transfer of land appears to be coming over the next decade or two. In fact, according to the U.S. Forest Service, approximately 79 million acres of forest land, an area about the size of Alabama, South Carolina, and Kentucky combined, are projected to change hands over the coming decades in the U.S., most of which will occur in the South.

Unless solutions can be found that ensures land owners realize the full value of the benefits provided by forests to society, they are at risk of disappearing. According to an analysis of the impacts of future housing density on American forests, vast areas of land are being converted to suburban and urban uses. In South Carolina alone, 1.3 million acres of land is expected to be impacted by suburban and urban development between 2000 and 2030. That’s a little less than the 1.5 million acres or so of lands currently under protection. 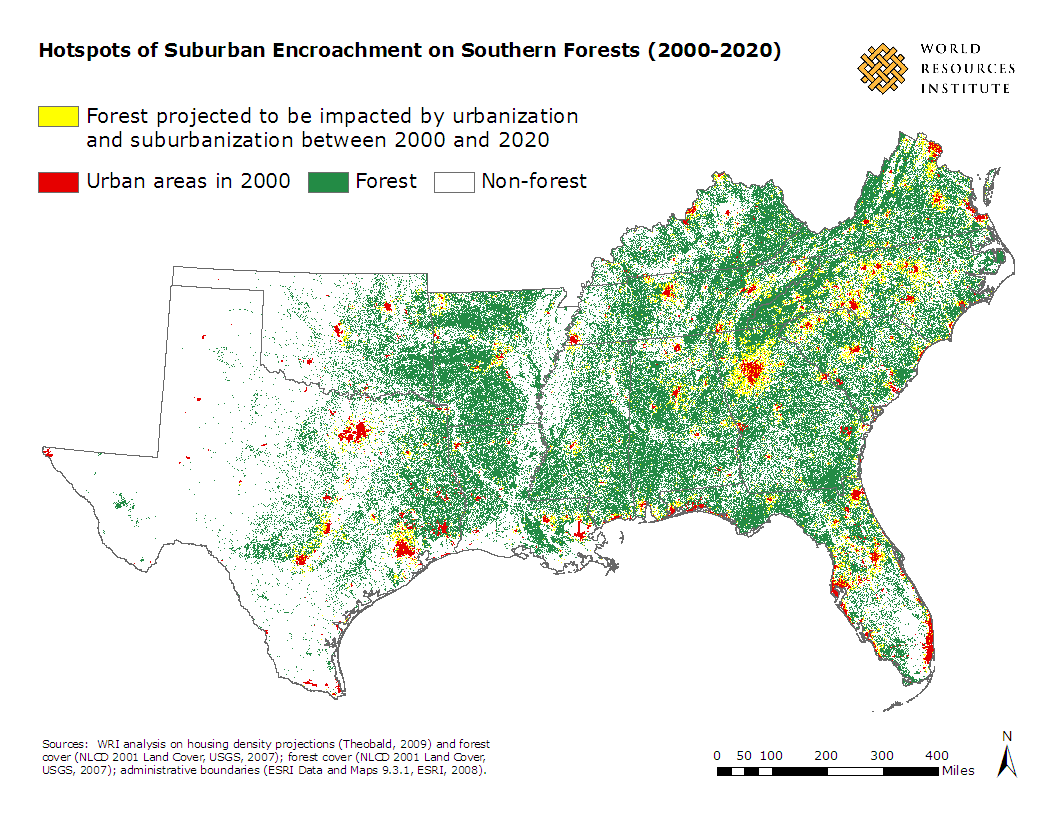 Fortunately, programs already exist in the region that can provide the multiple income streams that woodland owners desperately need. These include payments for maintaining forest wetlands, riparian buffer plantings to counter erosion, programs to aid rare species’ recovery, and conservation easements. South Carolina already has a number of state-specific programs, including a state conservation tax credit and a state conservation bank program for landowners.

Emerging markets for “ecosystem services” are also emerging that complement those for timber and pulp. These include markets for non-timber forest products such as pine needles for mulch and bedding, ginseng and walnuts. They also include markets for carbon storage, wetland preservation or conservation, and watershed protection. Some of these programs can yield significant payments for woodland owners, depending on the demand. For example, spending on hunting, fishing, and wildlife-watching activities in the South reached an estimated $41.4 million dollars in 2006.

However payments and incentives to preserve the “ecosystem services” that woodlands provide for people are still applied in piecemeal fashion across states, and are not well publicized or understood. As a result, most family woodland owners are not realizing the full potential income benefits of their land, which makes the alternative of selling up to a suburban developer increasingly attractive.

In order to scale up these financial incentives, the World Resources Institute (WRI), an environmental and development organization, has launched Southern Forests for the Future. This pioneering project publicizes threats facing southern U.S. forests, and pilot tests financial, market-based and other incentives for woodland owners to preserve them. By 2030 the southern U.S. alone is projected to lose 31 million acres of forest, an area about the size of North Carolina. With the help of organizations and communities throughout the region, WRI’s long-term goal is to catalyze the sustainable stewardship of a fifth of the South’s remaining 214 million acres of forest by 2020.

Companies such as Walmart and Coca Cola, various NGOs, including the Audubon Society, and The Nature Conservancy, and educational institutions including Duke and Emory universities, are already involved in developing incentives for providing woodland-based ecosystem services. However, a much broader and deeper effort is needed; one that involves local, state, and regional leaders working together to establish a portfolio of opportunities which family woodland owners can tap.

Woodland owners surveyed by the U.S. Forest Service cited as their top reasons for owning woodland not timber, but beauty, family heritage, and the protection of nature. It is time for an approach to woodland management that provides a decent living for the owners that steward them while preserving the benefits woodlands bring to all of society.