SeeSouthernForests.org provides a new way to learn about – and protect – the forests of the southern United States.

Changes over a large area are often hard to see. This can be especially true when it comes to forests -- incremental forest loss often goes unnoticed until it is too late. A new website and report by the World Resources Institute seek to change this and allow people to visualize the trends and drivers of change affecting southern forests.

The southern forests of the United States, stretching across 13 states, from Texas to Virginia and from Kentucky to Florida, are incredibly productive. They yield 18 percent of the world's pulpwood for paper and 7 percent of its industrial timber while comprising just two percent of the world’s forest area. These forests also provide a number of other critical ecosystem services, such as water filtration, erosion control, and climate regulation by sequestering carbon, not to mention the myriad opportunities they provide for people to hike, hunt, camp, and enjoy natural beauty. 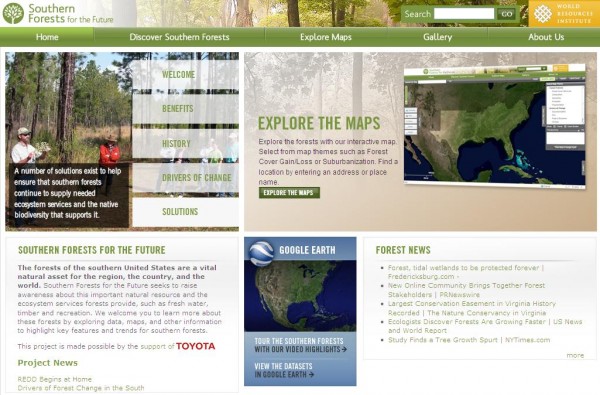 However, these forests are increasingly under pressure. SeeSouthernForests.org provides, for the first time, time series satellite maps dating back 30 years that reveal trends and changes in southern forests. The website also offers a rich trove of environmental data that can be overlaid on current and historical satellite images to give a clearer picture of what is happening to southern forests. For example, the maps below show the suburbanization trends of Atlanta (the city on the right) and Birmingham (on the left), from 1990 to 2010 (projected). The gray areas are urban and the yellow are suburban.

According to Craig Hanson, Director of WRI’s People and Ecosystems Program and a co-author of the report, “This kind of visual information can empower more people to better understand the forces of change in southern forests, and hopefully better protect or sustainably manage them in the future.”

The project, made possible by Toyota, will also look at innovative financial incentives that can help preserve both the economic and the ecological benefits of southern forests. Unlike other forests in the United States, the majority of forests in the South (87%) are privately owned, and of this, two-thirds is owned by individuals and families. Many of these private landowners face pressure to subdivide their land and sell for commercial or residential development. In the coming year, WRI will work to identify a portfolio of incentives, markets and practices that could encourage private landowners to retain their forests and manage them sustainably.

The forests of America’s so-called "Woodbasket" are an integral part of the southern economy, and their continued health and vigor has never been more important. How we respond to these drivers of change will shape the future of southern forests, communities, and the economy.