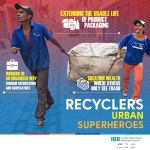 A joint seminar by Victoria A. Beard (Fellow, WRI), Ricardo Valencia (Iniciativa Regional para el Reciclaje Inclusivo), Gonzalo Roqué (Fundación Avina), Silvio Ruiz (Waste Pickers’ Cooperative of Bogotá - ARB ESP) and Severino Lima Jr. (Coocamar Cooperative, Natal, Brasil) on informal economy and waste pickers in cities in the global South. The seminar is framed by the forthcoming paper Including the Excluded: Supporting Informal Workers for More Equal and Productive Cities in the Global South, the next installment of the World Resources Report (WRR), Towards a More Equal City. Currently, estimates of urban employment in the global South are between 50 to 80 percent. The paper examines waste pickers as one group of self-employed informal workers, and analyses the ways in which city policies impact their needs for public services, public space, and public procurement. Urbanization and privatization of solid waste management occurred earlier in Latin America than in other regions of the global South, spurring the organization of waste pickers. Over the past 30 years across Latin America, increasing numbers of waste pickers have organized and mobilized through legal struggles and advocacy campaigns. Ricardo and Gonzalo explain inclusive policies for waste pickers, and go over the conditions that prompted changes in managing urban solid waste in Latin America, as well as understanding the role of waste pickers in this transformation.

Read our blog in English, Spanish, Portuguese and French.

Victoria A. Beard is a Fellow at the Ross Center for Sustainable Cities. Victoria is leading the effort to produce the World Resources Report (WRR), Towards a More Equal City. She was the lead author on the WRR framing paper, designed the research methodology for a series of city-level case studies on urban transformation, and she is co-authoring papers on inclusive cities and informal workers as well as papers on equitable access to urban water and sanitation services. Victoria’s career has been defined by a synergy between urban planning research and practice. Her work focuses on comparative urbanization, equitable access to core infrastructure and services, community-based planning, and urban poverty.

Ricardo Valencia is a Strategy Director of the Iniciativa Regional para el Reciclaje Inclusivo (IRR)/Regional Inclusive Recycling Initiative. He joined the organization in 2014 with the aim of implementing principles of inclusive recycling for the workers of the sector throughout Latin America. Ricardo is also a lecturer in the areas of Economics, Micro and Macro Economics, Environmental Economics, Informal Economics, Circular Economy as well as Ethics and Economics. He holds a Master’s and a Bachelor’s degrees from Javeriana University, Colombia.

Prior to IRR, Ricardo Valencia held positions as Corporate Social Responsibility Advisor in the Colombian Social Responsibility Center; Advisor to the Executive Presidency in the Colombian Confederation of Chambers of Commerce; Associate Researcher and Coordinator of the Rural Economic Development Component of the Colombia Program at Georgetown University; Project Coordinator at Avina in Colombia; Coordinator of topics on recyclers for Latin America of WIEGO (Women in the Informal Economy: Globalizing and Organizing); Coordinator of the Project to support the Integral Management of Solid Waste in the Regions of the Sierra Nevada de Santa Martha for Tetra Pak and Corporación Horizonte and Executive Director of CEMPRE Colombia.

Gonzalo Roqué is a program director of Fundación Avina and is in charge of the execution of the Regional Initiative for Inclusive Recycling, an alliance with the IDB, Coca-Cola, PepsiCo, and the Latin-American Waste Pickers Network. The Inclusive Recycling Program at Avina was formed in 2005 largely due to his efforts. Gonzalo is an Industrial Engineer from the University of Buenos Aires, Argentina, with more than 15 years of experience in the field of Sustainable Development, with the focus on Sustainable Economic Development. His professional focus is on Inclusive Recycling. Gonzalo has also worked in the design and implementation of initiatives related to Inclusive Business and Inclusive Markets, Impact investment, Corporate Social Responsibility, and business at the base of the pyramid.

Silvio Ruiz Grisales is a waste picker from Bogotá, Colombia. He is involved in three waste picker groups in Colombia: The Colombian Association of Waste Pickers (Asociación Colombiana de Recicladores – GAIAREC), the Waste Pickers’ Cooperative of Bogotá (ARB ESP), and the National Association of Waste Pickeres (ANR). He is also a representative of the Latin American and Caribbean Network of Waste Pickers (Red Lacre). Silvio began working as a waste picker in 1982, at the age of 12. At that time, he worked in the city of Manizales. The dumpsite that he worked at had a cooperative called Cooperativa Prosperar. He was elected director of the cooperative when he was 17 years old. Since then, he’s continued to work as a leader and organizer within many organizations. He’s been involved in the creation of recycling projects.

Severino Lima Jr. is the President of the Coocamar Cooperative in Natal, Brasil. He is part of the National Movement of Waste Pickers of Brazil and is a representative of the Latin American Network of Waste Pickers (RedLacre).

WRI Ross Center for Sustainable Cities
Cities For All