The Paris Climate Promise: A Good Deal for America 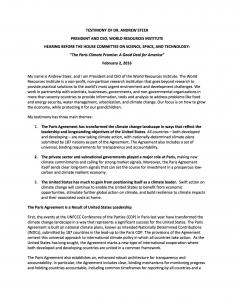 On February 2nd, President and CEO of the World Resources Institute Andrew Steer testified in front of the House Committee on Science, Space and Technology for a hearing about the historic Paris Agreement. Drawing on the latest research, analysis, and outcomes from the Paris climate summit, Andrew highlighted three main themes. First, the Paris Agreement has transformed the climate change landscape in ways that reflect the leadership and longstanding objectives of the United States. Second, The private sector and subnational governments played a major role at Paris in supporting strong climate action. Third, The United States has much to gain from positioning itself as a climate leader. The Paris Agreement was a historic achievement for the world and provides the foundation for a healthier, stronger, and more prosperous world.