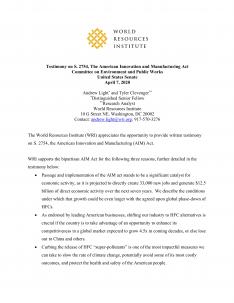 This Testimony is from our Climate Program. Reach out to Matt Herbert for more information.

This Testimony is from our Climate Program. Reach out to Matt Herbert for more information.

On April 7, WRI Distinguished Senior Fellow Andrew Light and Research Analyst Tyler Clevenger submitted testimony in virtual hearing before the U.S. Senate Committee on Environment and Public Works. The topic was on Senate Resolution 2754, the American Innovation and Manufacturing Act (AIM), a bipartisan bill that will direct the U.S. Environmental Protection Agency to reduce emissions of dangerous hydrofluorocarbons (HFCs), putting the U.S. on track to achieve the reductions in HFCs mandated by the Kigali Amendment to the Montreal Protocol. The testimony echoed, amplified, and enhanced the unanimous voice of U.S. industry that passage of the AIM act would grow American jobs, increase revenue, and make American more competitive and secure. Some HFCs are thousands of times more potent as a warming agent than carbon dioxide. Successful implementation of the Kigali Amendment could avoid up to half a degree Celsius of temperature increase caused by humans by the end of the century. This would be a tremendous savings when we have already warmed the planet over one degree Celsius, and the internationally agreed upon goal is to limit warming to no more than two degrees and make every effort to limit it to 1.5 degrees Celsius. As Andrew and Tyler argue, especially “at a time when the American economy is on the ropes due to the COVID-19 pandemic, we cannot afford to miss any opportunity to support American workers and businesses, especially when it will help to mitigate other problems which will threaten our safety and security.”