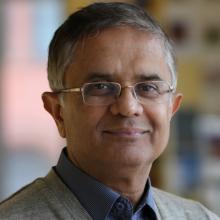 Senior Fellow Vijay Jagannathan provides strategic and technical advice to WRI Ross Center for Sustainable Cities. He is also Secretary General of CityNet, an association of 140+ urban stakeholders committed to sustainable development in the Asia Pacific region, and an adjunct professor at the Elliot School of International Affairs at George Washington University.

Vijay is supporting the WRI Beijing office in its various initiatives promoting low carbon resilient development. Prior to this assignment he led the WRI team providing technical assistance to cities in the Central Asia Regional Cooperation (CAREC) countries to promote low-carbon development in selected cities of China, Kazakhstan and Mongolia under an ADB finance technical assistance. He is a member of an advisory committee established by Chengdu Municipal Government and also participated as an international expert advising the China Academy of Urban Planning and Design in developing the city models for ecological civilization under the CCICED program in China.

Before joining WRI Vijay was sector manager for infrastructure in the East Asia and Pacific region in the World Bank. He was responsible for an annual lending program of about $5 billion in the urban, water, transport and energy sectors. Vijay has been also associated with the APEC-led green growth and green finance initiatives. Prior to that he managed the water program of the World Bank in the Middle East and North Africa region. Overall, he worked on infrastructure, environment and urban development for over 24 years at the Bank. Prior to that he spent 10 years in the Indian Administrative Service, including his last stint as Secretary of the Calcutta Metropolitan Development Authority, which was responsible for all urban development programs in one of the largest cities of the developing world.

Vijay is an economist by training, with a PhD from Boston University. His dissertation on the informal markets for the poor was published by Oxford University Press in 1987 and recognized as one of the "Outstanding Academic Books of the Year" by the American Library Association. He has published extensively on water, urban development, agricultural development and environmental issues.