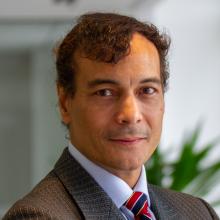 Quentin Dean is the Executive Assistant to the Global Director of the NDC Partnership.

Prior to joining the NDC Partnership, Quentin served as Senior Regulatory Affairs Coordinator at ACICS, where he managed higher education projects, coordinated congressional relations and organized external affairs events. Previously Quentin worked for the World Bank in the Office of the President, where he prepared briefings for meetings with Heads of State and Government, international organizations and NGOs, arranged meetings with business and bank CEOs, and coordinated issues throughout the World Bank. Quentin also served in the offices of the Managing Directors, the Vice President for Operations Policy and Strategy, and the Office of the Vice President for External and United Nations Affairs.

Prior to this, Quentin worked for the United Nations Children’s Fund (UNICEF), where he provided member states with information and photographs about the state of the world’s children. Quentin previously also served as intern in the White House, in the Office of Cabinet Affairs, where he assisted with coordinating relations between the President, White House staff and members of the President’s Cabinet. He also served as an intern in the United States Senate for Senator Edward Kennedy.