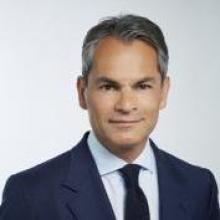 Nader has spent the past 20 years in leadership positions in global institutions at the intersection of geopolitics, policy and markets.

From 2010-2013, Nader was Chief Executive of Oxford Analytica, a leading global analysis and advisory firm. Previously, he was an investment banker at Goldman Sachs, where he worked in the Financial Industries M&A group in New York and in the Executive Office in London.

Before entering the private sector, Nader served at the United Nations, first as a political officer in Bosnia-Herzegovina, and subsequently in the Executive Office of UN Secretary-General Kofi Annan from 1997-2003.

Nader is a widely published contributor of essays to The Financial Times, The New York Times and Foreign Policy. In 2012 Nader authored, with Kofi Annan, Interventions: A Life in War and Peace, and is the editor of the Black Book of Bosnia, published in 1996.